This content contains affiliate links. When you buy through these links, we may earn an affiliate commission.
The City We Became, By N.K. Jemisin. 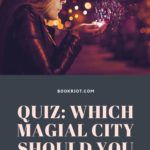 Why live in a mundane city when you can live in a magical one? Travel to your city via tattoo, visit the local magical library and receive book recommendations from the orangutan librarian, avoid the giant spider attacking the public transit system, dodge fairies on your way to work, argue about the latest political machinations of your djinn overlords. In magical cities, everything is possible.

Fantasy differs from realistic genres primarily through setting. Jeff Vandermeer argues in Wonderbook: The Illustrated Guide to Creating Imaginative Fiction that all settings are fantasy regardless of genre because “it does not exist in our reality the way it does on the page.” Thus, if I were to write a story based in Nashville, my home city, it would still be a fantastical version of that city, because it would be interpreted through my imagination. But fantasy cities require extra layers of world building. The best fantasy cities have deeply imagined histories, their own folklore, teem with languages and cultures and diversity, and, best of all, contain MAGIC. It’s that magic part that I crave. While Nashville is my home city, my dream city would not be of this world. It would be filled with dragons and fairies and spellbooks, witches and djinn and giants. It might be more dangerous—magic usually is—but every day would be an adventure.

If you’re like me and dream of finding a magical city to call home among dragons and wizards and sorceresses, take this quiz and find out which magical city you should live in. And who knows, you may find a door where there should be no door, or accept a stranger’s invitation, or board the wrong bus, and find yourself transported into the magical city of your dreams one day.