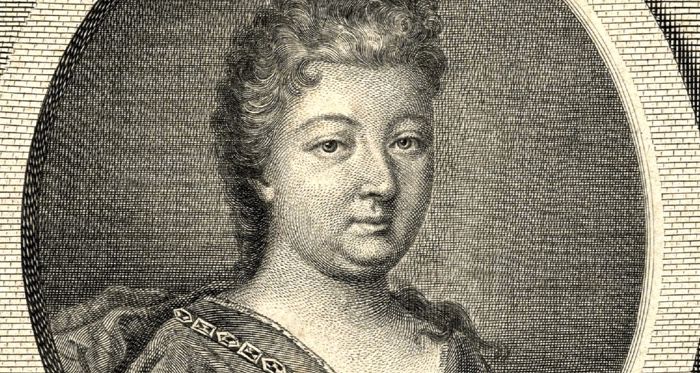 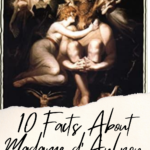 Her name was Marie-Catherine Le Jumel de Barneville, the Comtesse d’Aulnoy. Born in 1652, she coined the term fairytale — conte de fées — in 1697–98, when she published a collection of her own literary fairytales. Yet, despite her importance to fairy tales and her popularity in 17th and 18th century France, her writing rarely appears outside of anthologies. That’s the case for many French women fairytale writers, whose work was superseded by Charles Perrault despite their overwhelming popularity at the time of their publication. Madame d’Aulnoy finally gets a book of her own translated into English with the publication of The Island of Happiness, a gorgeously illustrated collection of eight of her fairytales translated and edited by Jack Zipes with drawings by Natalie Frank.

Although I’d read many of her fairytales in Beauties, Beasts, and Enchantment and studied some of them in grad school, I had never delved into her biography. In his introduction to The Island of Happiness, Jack Zipes details what’s known about her life, and wow, does this woman deserve a miniseries! Here are ten amazing facts about Madame d’Aulnoy, and why everyone should know her name.

Her Mother Married Her Off at 13

Imagine being a 13-year-old girl forced to marry a man 30 years older who was, to make matters worse, a notorious rake and gambler. And don’t give me it was “normal for the time.” Lots of things that are normal should never happen. Madame d’Aulnoy resented the marriage, a fact shown in her subsequent actions five years later (see the next heading) and in her fairytales. Many of her fairytales depict young couples in love with cruel parents who try to force unwelcome arranged marriages on one or both of them. It’s evident in her fairytales that Madame d’Aulnoy believed that couples should decide who they marry, not their parents, and when forced marriages happen, they’re doomed.

She and Her Mother Tried to Kill Her Husband

By age 18, Madame d’Aulnoy had three children (two died in infancy), and she was miserable. Her mother apparently regretted arranging the marriage, and together they concocted a plot to implicate the Baron d’Aulnoy in high treason, punishable by death. With the help of two accomplices, the Baron was arrested, but he proved his innocence. Instead, the two accomplices were executed, Madame d’Aulnoy’s mother fled France to escape charges, and Madame d’Aulnoy was imprisoned with her infant daughter. The imprisonment was brief, and when she was released, she separated from her husband and lived for two years in a convent. After leaving the convent, she traveled for 13 years, but little is known about her travels.

She Helped Try to Kill Her BFF’s Abusive Husband

Allegedly, in 1699, Madame d’Aulnoy assisted her friend Madame Ticquet in the attempted assassination of her abusive husband, who was also a member of Parliament. Unfortunately, the man survived, and Madame Ticquet was charged and beheaded. D’Aulnoy was not charged.

She Published Her First Book at 39

Madame D’Aulnoy never would’ve made it on the Writers Under 35 list. The Story of Hypolitus, Count of Douglas was published in 1690 and was very popular. It contained her first published fairytale, “The Island of Happiness,” a sad tale of a man who falls in love with a goddess on an island of happiness but refuses to be content with love alone. Later the same year, she published Memoirs of the Spanish Court and continued publishing regularly after that, becoming one of the most popular authors of her time.

She Created a Literary Salon

The literary salon originated in 17th century France and was created for like-minded writers, artists, philosophers, and more to gather in private homes and share thoughts and current writing away from the French court of Louis XIV. Louis XIV was not a king who appreciated honest criticism. Literary fairytales became a way of critiquing the court without openly denouncing it and King Louis XIV. Madame d’Aulnoy’s literary salon was very popular, and this is where she first tested her fairytales before publication. Other authors would recite their fairytales as well, and even dress up as characters from fairytales.

She Coined The Word Fairytale

“Conte de fées” was coined in 1697–98 with the publication of her first collection of fairytales titled Les Contes des fées, I–III.

She Established the Literary Fairytale Genre

She most likely grew up hearing oral tales from her mother, aunt, nannies, and servants. It’s also likely that her work was influenced by Giovan Francesco Straparola’s The Pleasant Nights (1550–53) and Giambattista Basile’s The Tale of Tales (1634–36). She used these oral tales and collections as inspirations for her own fiction, and her literary fairytales ignited France’s literary community. She used the word “fairy” because most of her tales contain a meddlesome fairy. So if you’re wondering why so many fairytales have no fairy in them, it’s because her very appropriately used term came to be identified with any fantastical tale with folkloric roots, regardless of whether it contained a fairy or not.

Compared to the Grimm brothers’ 200+ tales or Hans Christian Andersen’s 160+ tales, 25 might not seem like a lot, but she authored more than double the number of her contemporary Charles Perrault. Her fairytales are much longer than the ones the Grimm brothers collected, more similar to modern short stories and novellas than their oral collection (though the Grimm brothers often added their own literary touch to the tales they collected). Her tales describe women wronged by their lovers, humans cursed to become animals, and women choosing their own husbands. They’re often funny, dark, and somewhat twisted. With wry humor and pointed critiques, her tales call for women’s autonomy. While many consider her tales feminist — and in many ways, they were for the time — they still contain some cringe-worthy moments for modern feminists, like every evil character being ugly and every good character beautiful. In addition to her fairytales, she also wrote many popular memoirs, novels, and devotionals.

She was More Popular Than Charles Perrault

Listen, I know I’ve mentioned this a few times, and it’s not that I don’t enjoy Perrault’s fairytales. But it is just infuriating how fairytales have been coopted by men, especially since oral folktales were often told by women and considered women’s tales (Check out From the Beast to the Blonde for more about this). We have Walt Disney to thank in part for Perrault’s fame. He used Perrault’s “Cinderella” for his film version.

Madame d’Aulnoy separated from her husband in 1670, and he died in 1700. Even though her fairytales centered on love and marriage, she never remarried and lived independently in her own home in Paris, where she hosted her literary salon. There are some mysteries to her romantic life, however. While she had one daughter with her husband, she had two more daughters later, and scholars don’t know who fathered them.

D’Aulnoy’s fairytales, when first translated into English, were often bowdlerized, all the wit and scary bits deleted in favor of making her fairytales more child-friendly. Because her fairytales did not translate well to a child audience, unlike Perrault’s more direct writing style, her fairytales gradually faded from popular culture. While her tales are denser than many older fairytales, they also hold a wealth of imagination.

If you’d like to read her fairytales, check out The Island of Happiness edited by Jack Zipes. To learn more about her and the many French literary fairytale writers, read Beauties, Beasts, and Enchantment, also edited by Jack Zipes. To read more about how women’s voices were superseded by men’s in the folkloric tradition, read From the Beast to the Blonde by Marina Warner. All the information from this article comes from these three books, mostly the first.

To read a really awesome retelling of one of her tales, check out White Cat by Holly Black. At a conference several years ago, I had the opportunity to hear Holly Black tell D’Aulnoy’s fairytale “The White Cat.” It stands out in my memory as one of my favorite moments from a conference. Holly Black is a really hilarious storyteller. It is the only time I laughed so hard at a conference I cried. I also recommend Kate Forsyth’s Bitter Greens. While this novel is not about Madame D’Aulnoy, it’s about a contemporary of hers, another woman writing fairy tales in King Louis XIV’s court — Charlotte-Rose de la Force. It’s a lovely novel that captures the mood of the time and the situation of women like Madame d’Aulonoy.

And now I hope you’ll agree, Madame d’Aulnoy sounds like a pretty badass lady, and her fairytales deserve to be read and remembered.