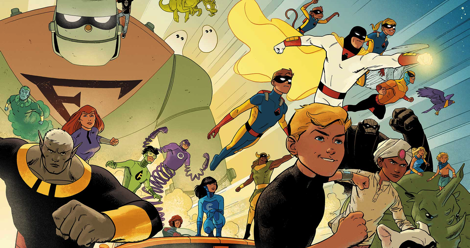 When DC first announced that they planned to publish comics featuring Hanna-Barbera characters, some readers were likely pleased. Cartoons have been borrowing from comics and vice versa since the dawn of time, and in an era that seems to revel in gritty reboots of nostalgic properties, it was refreshing to see a publisher so fully embrace the gentle nature of the original cartoons.

When the company then announced that they planned to launch a line of DC/Hanna-Barbera one-shots, readers (read: me) may have been skeptical. But it is with great pleasure that I let you know that both endeavors are an utter delight. 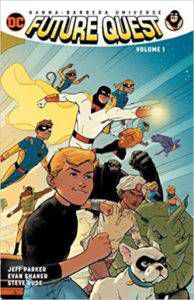 Future Quest caught my eye immediately upon its announcement, as I’ve also been a Jonny Quest fan, in all his many incarnations. Though The Real Adventures of Jonny Quest TV cartoon was my favorite as a kid, the show aged up Jonny and Hadji to their early teens. (It also added Jessie Bannon, arguably one of the best female characters on a 90s kid’s show, which was another huge plus.) But the Future Quest series chooses to keep the kids as kids, pairing Jonny, Hadji, Dr. Quest, and ultimate DILF Race Bannon with Hanna-Barbera standbys like Space Ghost, Birdman, and the Herculoids and Jonny Quest classic villains like Dr. Zin and Race’s old flame, Jade.

The story follows the characters—good and bad—coming together to fit a global threat from another quadrant of space: a giant, dimension-hopping, planet-devouring monster. It’s silly and fun, just like a Saturday morning cartoon should be. Whether you watched these cartoons when they first ran, caught up on channels like Boomerang, or only vaguely recognize Space Ghost from the early years of Adult Swim, if you’re looking for lighter fare, Future Quest is your pick. 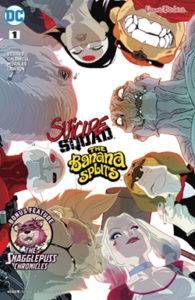 On the one-shot side, only the first of the series has dropped so far—the Suicide Squad/Banana Splits special, a zany kick-off issue that finds Amanda Waller recruiting none other than the Banana Splits to rescue the Suicide Squad when a mission goes wrong. The members of the mild-mannered bubblegum pop band—Fleegle, Bingo, Drooper, and Snorky—find themselves in Belle Reve prison after being mistaken for metahumans. (For the record, they’re just giant anthropomorphic animals—huge difference.) And it’s in prison that Waller finds them, and decides that they’re the only group of would-be vigilantes that is more disposable than the Suicide Squad itself.

If you’re not a Suicide Squad fan, there will be more crossovers to come—including a Green Lantern/Space Ghost team-up that looks amazing. I’d also recommend checking out the teaser story at the back of this issue. There we become reacquainted with Snagglepuss in 1947 America, a subversive playwright who has been brought in to testify at a congressional hearing about his possible communist leanings. (Heavens to Murgatroyd!) I cannot explain the joy that I felt when I read the note at the end of the story that Snagglepuss will be getting his own series, Exit Stage Left: The Snagglepuss Chronicles.

To your local comic book store—the nearest funnies shop, even!