When it comes to Marvel Comics, I can seem like I have a split personality. One moment I’m gushing over one of their books, and the next I’m wondering how they could possibly do something so incredibly stupid. Do I love Marvel, or do I hate them?

Anyone reading through my archive of articles from the past year could easily get the impression that I hate Marvel. There was the time I called out Spider-Man #2’s attack on female fans, the time I criticized Marvel’s failure to launch a new Jessica Jones series in the wake of the Netflix series, the time I argued Marvel needed to take a break from events, or, most recently, that time I proved with sales data that diversity didn’t cause Marvel’s declining sales. Geez, I must really have it out for Marvel, right?

Except I don’t. Honestly, I love Marvel. And it’s the love that drives me to criticize, like a constantly disappointed parent, because I know they can do better.

While I had picked up an occasional comic book from the spinner racks at the grocery store as a kid, my real love affair with Marvel started in middle school, when I spent the night at a friend’s house and he showed me his comics collection. There were so many wonderful stories I never even imagined, so many exciting new heroes (and villains!). From that moment on, I was hooked. Sure, I’ve had some extended periods away from Marvel, but I always seem to find my way back. 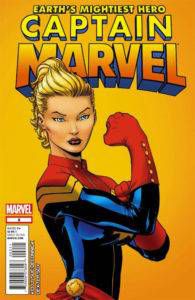 And there has been so much to love, so many amazing stories told over seven-plus decades. There was Joe Simon and Jack Kirby’s Captain America punching out Hitler in the 1940s; future MAD artist Al Jaffee’s run on Patsy Walker in the 1950s; Stan Lee and Jack Kirby redefining comics with The Fantastic Four in the 1960s; Jim Starlin’s 1970s run on Warlock; Roger Stern and John Romita, Jr.’s 1980s run on Amazing Spider-Man; Peter David’s first stellar X-Factor run in the 1990s; Dan Abnett and Andy Lanning’s Cosmic run in the 2000s; and Kelly Sue DeConnick’s Captain Marvel—and all the books it helped pave the way for—in the 2010s. There has truly been so much to love coming from the House of Ideas.

The downside to loving so much of what Marvel has done, though, is that I have high expectations, and can be seriously let down when Marvel fails to meet them. I expect all comic publishers to make mistakes (I mean, this is comics, after all…), but it hurts more coming from Marvel than from a smaller publisher I have less of a personal connection with.

What hurts more is when it feels like Marvel is failing to keep up or, worse, backtracking. The world has changed significantly since the 1960s when Marvel reinvented superhero comics, but a lot of the cast looks largely the same, i.e., overwhelmingly white and male. There are not nearly enough women, people of color, or queer characters on the page. And, when they do appear, they are often written and drawn by cis-het white men. In 2017, that’s a serious issue. 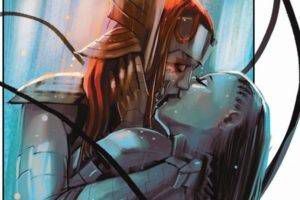 And yet, it has often felt like Marvel doesn’t view it that way. Whether it’s Axel Alonso’s repeated habit of erasing queer identity (whether by denying Hercules’ bisexuality or refusing to “put labels” on the obviously queer relationship between Angela and Sera), Marvel’s habit of cancelling books like Mockingbird before their first trade has even been release, top editors and writers’ habit of blaming readers for the failure of books to find an audience, or the vice president of sales outright blaming declining sales on “diversity,” Marvel has been doing its best to make it look like it doesn’t care about anyone outside of its core audience of cis-het white men who buy single issues from local comic stores.

It’s tough to watch this play out years after year and not get frustrated with Marvel. It’s even tougher when the narrative seeps into the comics themselves, whether through the mocking of female fans in Spider-Man #2 or the groan-inducing “takedown” of social justice warriors in Captain America: Sam Wilson #17. There’s something rotten in the state of Marvel, and the sooner the publisher deals with it, the better.

In the meantime, while I have largely checked out of the big name series and crossovers (no, I don’t want to read about a Nazi Captain America, thank you very much), I continue to read some of the absolutely stellar titles that often fly beneath the radar. Every time I even start to consider giving up Marvel, I remember some of these amazing gems.

There’s Silk by Robbie Thompson, Tana Ford, and Ian Herring, which for the past two years has shown us an Asian-American superhero battling not just crime, but also her own insecurities. Some of the most devastating pages have been when Cindy Moon faced off against her therapist, rather than the Black Cat or the Goblin Nation.

Or there’s The Unbeatable Squirrel Girl by Ryan North, Erica Henderson, and Rico Renzi, which manages every month to balance humor with an inspiring, heartwarming tone. Doreen Green is unbeatable not because she’s the strongest superhero out there, but because she knows that many times the only way to win is not to play. 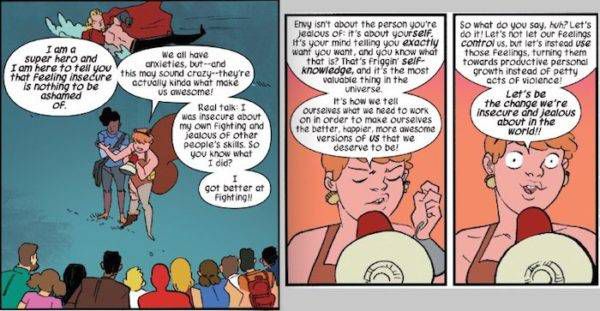 Or Mockingbird by Chelsea Cain, Kate Niemczyk, and Rachelle Rosenberg, which told an intricately-plotted story that worked amazingly well both as single issues and as a trade, all the while being unrepentantly feminist. It’s incredible.

Or Spider-Woman, or Vision, or Patsy Walker, A.K.A. Hellcat!, or Moon Girl and Devil Dinosaur, or Hawkeye, or… I could go on and on. I don’t give up on Marvel because even now, I still love so much of what they publish.

I just won’t let that stop me from trying to help make their books even better.