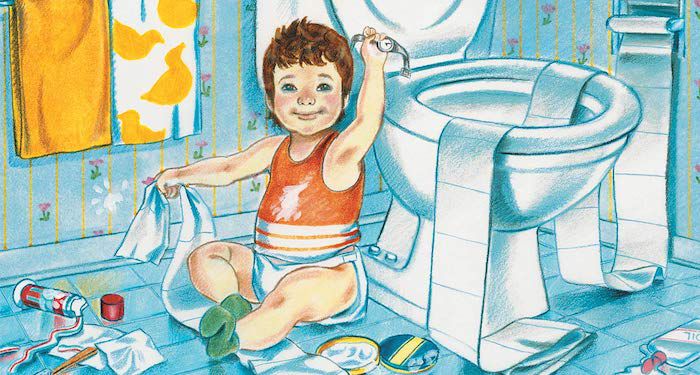 My Introduction to Love You Forever

The first time I read Love You Forever by Robert Munsch and Sheila McGraw, like most people, I thought it was very sweet. It showed that, no matter what, my parents would always love me. I’m not sure why it made such an impression on me. I know I was past that recommended reading age. It’s possible that it was after my mother had passed away. If true, that could be one explanation for it seeding itself firmly into my brain.

Whatever the reason, it was there. So, this was one of the first books I got when I started actively reading to my son. I was so excited to share it with him. When I mentioned it to one of my friends she quipped, “Oh you mean the book where Mom has boundary issues?” I laughed responding, “It’s still a sweet book.” Later that night, I snuggled up with him and gave it the first read through in years. And, while I had some concerns, I still enjoyed it and the overall message. As such, it became a fairly regular read for bedtime.

My son is now a teenager, so we’re well past picture books. He doesn’t read much now; it would be generous to even call him a “reluctant reader,” but that’s a story for another time. Since it had been a while, I decided to reread this book.

Now, admittedly, the first few pages were still overall very sweet. We open up when the boy is just a baby and the mother is just in awe of him. I remember those days, especially given my son’s inauspicious beginnings. You just want to look at them all the time when they’re sleeping. So, understandable. Then there’s the Terrible Twos and/or Threes. Between temper tantrums and the inadvertent messes, sometimes the peaceful way they look when they sleep make up for it.

The pages where she would see him sleeping like a little angel instead of the chaos demon hit home. I remember those days too. When we were there, my friend I quoted earlier educated me on LCS or Lion Cub Syndrome. This is the idea that lion cubs are so cute so their mothers don’t eat them during especially challenging periods. Those types of moments will always ring true. However, this is also where the book subtly began to turn into more creepy than sweet.

Where It Begins to Turn

To be fair, the illustrations on the pages don’t help much at all. They’re aesthetically pretty, but also extremely unsettling. While the prose on the page where she watches him sleep as a 2-year-old is sweet, the corresponding picture is creepy as hell. She has an alarming look in her eyes. I know that they’re supposed to be “concerned” or “making sure he’s still breathing” eyes. But that is not how it comes across at all. And this habit of watching him keeps on far longer than necessary.

Look, as a baby or toddler, I get it. You have that underlying feeling of paranoia and you want to be sure. I did it. But I didn’t do it every night. And I still don’t do it every night. I sure as hell am not going to do it when he grows up and is no longer in my house. But I’m getting ahead of myself.

Once he turns 9 is where it ratchets up to a concerning level. Now, the daytime portions of the book as the boy enters the teen years are accurate as all heck. I can attest to this. It really can feel like you’re living in a zoo with how loud and smelly teenagers can be. The strange clothes and music is something that we all go through. It’s the continued nocturnal observations when the son is sleeping that would cue the ominous music in a horror movie.

When’s he 9, she goes into his room in the middle of the night and rocks him. None of this bothers the boy, mind you. But it still seems odd to do it when he’s not sick. When we jump from 9 to the teen years is where it is clear she has no respect for boundaries at all. You see the boy sleeping and in the doorway you see the mom. She is on her hands and knees and peeking around the corner with her head almost all the way upside down like some kind of horror movie ghost.

Madam…why are you crawling? This is your house. You can stand in the doorway. Standing there would be slightly less creepy than crawling.

Where It Fully Turns

Finally, the boy is a grown man and living on his own. He moves out and you think everything will develop into a far healthier mother/son relationship. But nope. That’s not what happens. Because he only moved across town; not to a different city or state which, honestly, may have been healthier all around. This means that his mother could still get to him in a short period of time. Like, for example, in the middle of the night to check on him while he was sleeping. When he is AN ENTIRE GROWN MAN sleeping in HIS OWN DAMN HOUSE.

Y’all. She had a whole ladder on the top of her car in that page’s illustration. I don’t know if I never noticed it before or if I had blocked it out. But it was right there when I did the reread. And I said, “What the actual heck?” out loud.

I mean, let’s just look at the logistics of this. How did this tiny old woman get a ladder on car to drive over in the first place without her neighbors noticing? She’d lived in this house for years. No one was like, “Hey, Ethel” (that’s my name for her), “Whatcha doing? And why?”

And what about the son’s neighbors? Even if you don’t want to call the authorities, did no one want to ring him up and say, “Hey man, there’s an old lady climbing up to your window. Do you know her?” Why was no one concerned about any of this?

I know what you’re thinking: “She always did this in the middle of the night.” But I rebuke that, because there is always either one insomniac night owl or one light-sleeping nosy neighbor in any given neighborhood. Someone would have seen and said something.

Speaking of sleeping, I’m very concerned about how heavily her son sleeps. It was questionable at nine, as I mentioned earlier. But as an adult? You mean to tell me that he sleeps so hard that, not only does he not hear a ladder slamming against the side of his house, but he can’t tell when his tiny mother is picking him up to rock him to sleep?

My friend, I need you to hone your survival skills, because if a slasher tries to take you out while you’re sleeping…you’re gonna be completely screwed.

The end shows the man going to his mother’s house since, by her own words, she doesn’t have much time left. When he gets there, he picks her up and sings a variation of the song to her. Which, I guess, is sweet in a way. But we get no closure on the mom after that. Did she die after that? And, if so, did he leave her in the bed for the authorities to find or give them a call before he left? There are a lot of unanswered questions after that encounter.

And then at the end, we find out that the now grown-up son has his own newborn daughter. After watching her sleep, he picks up her and sings the song to her. So, we are left that slightly uneasy feeling that you get at the end of a horror movie. With this small moment, we know that this cycle of over-parenting is going to continue.

So, the question is, is this book is sweet or creepy? And the answer for me is it’s mainly creepy. And I think that’s because the sweet and understandable parts don’t outweigh the creepy and red flag–waving ones. Like most things that you consume as a child, you don’t get the subtle and possibly unhealthy undertones until you’re an adult. It’s like finally getting all the adult jokes that made your parents laugh when you dragged them to all those animated films growing up.

That said, I really do understand the intention behind the story, but the execution does not stand up well to the test of time. There is a lot of unhealthy codependency being displayed here. And that’s on both sides. Honestly, I think one of the crowning achievements of parenthood is that your children can go out and exist on their own without your constant hovering or monitoring. Yes, do still visit and have video chats (thanks to 2020, that is likely always going to be a thing now). But driving across the town in the middle of the night, with a ladder strapped to the hood of your car, to go visit your child? It isn’t normal or even a little bit sweet.

And, now that I’m on this roll, I wonder what kind of message it is sending to young mothers. This woman apparently has no other identity apart from being a mom. She appears to be a single mom, because the dad is never mentioned. The only other authority figure that we hear about is the grandma. But there’s almost no substance to the mom.

When he moves out, it appears she has nothing else to occupy her time. She had no other identity other than a mom. I’ve been struggling with this myself as of late. It’s why I’m working to find things outside of motherhood to engage in. It’s an easy trap to fall into thinking that you don’t have an identity outside of that; but it’s not true. Empty nest syndrome is a real thing, but use that energy towards something more productive, my friend.

This could also be one of those books that, unfortunately, does not stand up to the test of time. It’s not even the constant refrain of the song that makes it unsettling. It was the act of sneaking into her child’s room, no matter what age he was, that makes this book little less sweet and a lot more creepy. Because after a certain age, watching someone sleep isn’t sweet or cute. It’s unsettling and borderline stalkerish.

As a wrap-up, bear in mind this is my opinion and also slightly for satire. If you like this book and it’s your go-to for baby shower gifts, keep at it. It’s all in good fun. Most people nowadays know that if they acted like this with their child that someone would quickly do an intervention on them. Because, unless they’re sick, watching your child sleep is something that shouldn’t last into their teenage or adult years.