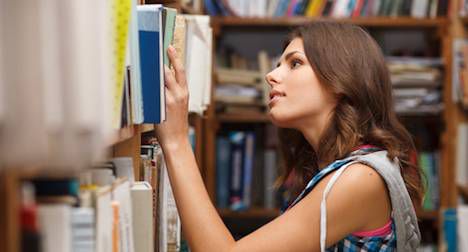 That is a bold statement, I know. Especially since I work at my library.

But it’s true. I have a severe love-hate relationship with the public library.

It’s not really hate. I swear. It’s just…dammit, library, why do you always have what I want?

I try to be really conservative about the number of books I put on hold, ofttimes when they first go on order and I know I’ll be waiting months to get them. And then they ALL COME AT ONCE. Because I wasn’t paying attention to their release dates. Ugh.

This is not how I planned to spend my year, reading new books from the library. I have a backstock of several hundred books in my house and on my ipad, and while I have been doing a slow purge (and after having another Come-To-Jesus talk with myself, will be doing another enormous one soon) there are still a lot of books I want to read on those shelves. Those are the books I should be reading right now.

And then I do things like…read the first book in a series, which I happen to own…and then immediately want to read the rest and put them on hold at the library. And then the third will come before the second, and I have to go buy the second one so I can read it before the third one is due again. (I know, I could have waited, but then it might have been taken! I can’t handle the waiting when I know I had it in my hand!)

Or maybe I’ll have seen something that was an absolute must when it was announced in October and I just have to read it immediately upon release, but it’s a hardcover so I shouldn’t buy it. If I have it on the Hold shelf already, I will be less inclined to pick it up when it comes out. So I am helping, by not adding more books to the collection.

Or maybe I will randomly surf through the New and On Order Books pages in the library catalog and (while I have been better at marking things “For Later” instead of immediately putting them on hold) add one or two books to my Holds list because they already have 15 holds…or I am super proud of myself for being first in line for something everyone will be buzzing about in about a month.

But I could be reading the books I already have, dangit!

Library, I love you. Library, I hate you. You keep me from doing the things I should do and guide me straight to the things I just really really want.