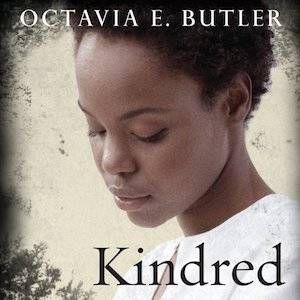 I recently read Kindred by Octavia Butler, a 1979 novel that tells the story of Dana Franklin, an African-American woman living in California in 1976 who, on her 26th birthday begins to be summoned back through time to Antebellum South to the Maryland slave plantation where her ancestors are from. This book works on so many levels, the writing is knife-sharp,  the scene work is top-notch, the dramatic tension is tautly wound, the ethical dilemmas posed in the novel are disturbingly difficult to reason through, all throughout the story morality comes in the murkiest shades of grey.

One of my favorite things about this novel, though, is the premise itself. It’s a wholly original story. I’ve never heard it before. I doubt I will hear of it again. It’s a thrill to hear the premise of a story, a book, a movie, television series, Broadway musical, whatever and go “Whoa. I’ve NEVER seen that before.” I’m not sure if there’s a moniker for this type of story so I’m just going to make one up. Let’s call this kind of story a “Maverick Story.” And holy bejeezus do I love a good Maverick Novel.

Of course it’s possible to be a great work if your premise is one people have heard a few times before (or a few hundred times before). Sometimes the general premise is familiar (starcrossed lovers, dysfunctional families, vampires being vampires and zombies being zombies) but it’s the specifics that make the story sing. Sometimes it’s just the execution is so darn good, we forgive the story in question for being yet another slice of life we’ve heard a hundred thousand times before, or yet another take on the Supernatural Monster Du Jour (vampires, zombies, maybe witches, when are MUMMIES going to be cool again??)

Yes, of course most stories are different-ish from one another. That’s why novels are published and purchased. Because the novel in question is JUST different enough from other novels. And a lot of readers want familiarity, that’s what they’re buying. Did readers by the droves buy Veronica Roth’s Divergent because it was worlds different from Suzanne Collins’ The Hunger Games. No, a lot of them bought Divergent because a lot of them bought Hunger Games, devoured all three volumes over the course of a weekend and were like “I’m STARVING for more dystopian YA  HUNGRY HUNGRY BOOKS NOW GRAWR!”

I get why publishing novels that are similar-ish to one another works. Still, it’s just the biggest reading thrill in the world for me to discover a story that is so DIFFERENT from the stories I’ve read before. Katherine Dunn’s Geek Love (which I wrote about a few weeks ago), Ernest Cline’s Ready Player One, Elizabeth McCracken’s The Giant’s House, Karen Russell’s Swamplandia!, Kevin Wilson’s The Family Fang, Erin Morgenstern’s The Night Circus, the list goes on, but it DOESN’T go on for as long as I would like.

What about you guys? What books have you loved that are unlike any book you had ever read before/have read since? What are your favorite maverick novels?