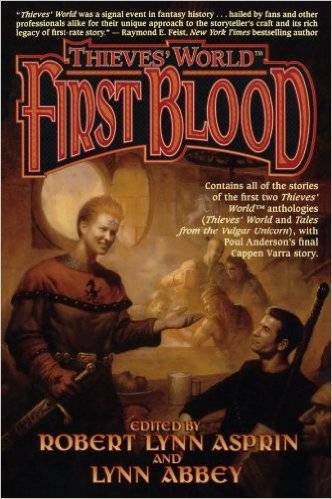 Another season of Game of Thrones has come to an end. And, let’s face it, even George doesn’t know when we’ll get the next book. So it wasn’t a surprise when a friend asked me to recommend a fantasy series to fill the void. And while no one seems to be in a rush to turn my all-time favorite fantasy series into a hit television show…yet…I’m determined to keep hope alive.

Thieves’ World was created and edited by Lynn Abbey and the late Robert Asprin. It was the first shared-world anthology series and featured stories by Poul Anderson, Marion Zimmer Bradley, Diana L. Paxson, CJ Cherryh, Janet Morris and Raymond E. Feist.  Originally published in the eighties, and then rebooted in the noughts, it pioneered and set the standard for the shared world format.

Now a lawless backwater located at the Southernmost tip of the Rankan Empire, Sanctuary was once a thriving port at the end of a rich caravan route. But that was a long time ago. The city and its inhabitants have fallen on hard times. What order exists is enforced by the Sacred Band of Stepsons, called “Hellhounds” by the locals, an elite fighting force in which the soldiers are bonded in both hetero- and homosexual warrier pairs. (The Hellhounds, like many components of the Thieves World universe, were inspired by the Classical Greeks). Led by the immortal Tempus, they serve Prince Kadakithis. Kadakithis, is the idealistic  stepbrother of the Rankan Emperor. He has been banished from court under the thin pretense of being promoted to governor of Sanctuary.

Other characters include the necromancer Ischade, who kills her lovers by “infecting” them with a curse she carries like a virus, only to bring her favorites back from the dead. And One Thumb, proprietor of the tavern called The Vulgar Unicorn, who once suffered under some magical spell. It was eventually lifted, but what is left is only the empty shell of the man he once was. Some, like the magician Lythande, whose powers depend on a secret, are just passing through on their way to books of their own.

The Dramatis Personae/population expands and contracts with each volume, making the city a place where alliances and motivations are constantly shifting. Morality is situational. Narrators, unreliable. “Facts” are entirely dependent on who is telling the tale. The stories deal with issues that are relevant to today’s readers: like economic inequality, gender identification, racism and xenophobia. Characters lose more often than they win.

Asprin and Abbey built a surprisingly rich and deep world.  They determined its geography, political and social constructs, laws of magic, different races of people and all the other minutiae that gods must attend to (yup, they were in charge of the gods too).  And on the seventh day they invited other writers to come play in their sandbox. But there was a catch… a seemingly simple loophole that opens up unexpected possibilities and is the greatest strength of the shared-world format:  a writer can co-opt another writer’s character for their own stories and, short of killing them off, do with them as they will. So, what happens when a writer no longer controls his or her character’s narrative? Inevitably someone starts looking for payback. Abbey once joked in an interview that an author’s first Thieves’ World story was written for fun… the rest for revenge.

As you read your way through the Thieves’ World books you will meet other characters who, like the ones described above, defy the typical genre tropes. There’s no stable boy who discovers he is destined for greatness or an evil monster intent on destroying the world. Instead you’ll be pulled into political intrigues, watch new gods replace old, and witness fortunes rise and fall and rise again. But one rule holds true whether you are a prince or urchin, merchant or magician, god or thief – in Sanctuary the only thing that ultimately matters is survival.