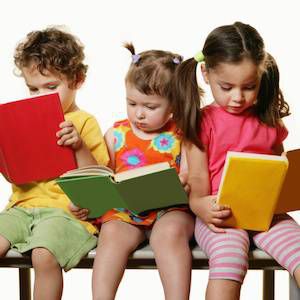 It was the end of the school year before the one we’re in right now, and I was about to go into my kids’ room and read chapters of Harry Potter and the Sorcerer’s Stone, and I was really dreading it.

I was dreading it, because it was an act of reading, and without my quite understanding how it had happened, the act of reading, when it involved my kids, had turned into a gigantic problem. Reading assignments coming home from school were the source of all sorts of fights. Getting them to be still and listen to me reading Harry Potter was a series of interruptions with me yelling at them, then finally getting so frustrated that all the fun went out of doing the reading. More frustrating still was realizing that they were zoned out and not paying an ounce of attention to anything that had happened.

My oldest child, Zach, had a wealth of books around the house – because there is a wealth of books for everybody here. It’s that sort of house – but they had mostly turned into toys. Things to be organized, to be handed out when playing school, to be used as construction materials for little forts next to the bookshelves. They weren’t for reading.

Bookstores were just as bad. They seemed to be places where my kids now went to play with toys. Even if we didn’t go to Barnes & Noble with its aisles of toys, little bookstores have little bits of toys, interesting rooms, and it was just a game to them. Books, it seemed, had fallen out of Zach’s life, and I was losing my mind over it.

There were two things I could do. One, I could force it. I could keep reading, keep insisting on books at bedtime, on looking at books in the bookstores and nothing else. I could keep pushing.

Or Two, I could stop.

I quit trying to make my kids read.

It was a long summer, that one, but only in the bookish department. Life goes on and life contains quite a lot which isn’t books, even though some days I really wish that weren’t so. There were parks and zoo trips aplenty, travels all over the part of western Washington I call home these days. Lots of time spent puttering around in a nearby basketball court, on bikes, while I played basketball, a sport in which I have lost none of my skills (picture Mister Magoo, and also he’s been told to try and play soccer).

The days got longer, and since it was summer, the bedtime enforcement got a lot more ragged, then fell by the wayside altogether. Evenings were for playing outside, and then settling in to watch a movie, or watch episodes of the half-dozen cartoons that we all get together as a family to watch. (Watch cartoons with your kids, folks. Find the good ones. They’re fantastic.)

We’d watch TV, have snacks, then they’d go to bed. Harry Potter had been abandoned a hundred pages into book one, but I’d make occasional efforts to read shorter books to them. Eventually, though, they stopped asking and I stopped pushing on that front too. There were no books.

For the longest stretch of summer…there were simply no books. My youngest would flip through them, but for Zach, there was almost nothing.

I never ever got used to it. It bugged me all summer. I love reading to them, and I had been fantastically excited about getting to read Harry Potter out loud to them, a chapter a night. The first bits I had read had been a blast, and I was so disappointed when it seemed to fall away.

So if it bugged me so much, why didn’t I push for it?

Because reading should not be a chore. And I think as a reading parent, I’m inclined to panic about lack of reading. Perhaps unconsciously I think he’ll wander off and discover video games or something and never come back to book. That’s absurd, of course. I frequently wander back and forth between books and video games, and so does he.

Reading should not be this great slab of a task slapped down upon your day by your parents. It should not feel like an obligation. Harry Potter chapters read with frequent pauses for me to yell at them to lie still and stop screwing around is not Harry Potter read for pleasure, but reading as an exercise in obedience, and that sounds like the pits to me.

Reading should be approached willingly and happily, because you want to. It should be done when and how you want to, and that’s it. It’s as simple as that. It should not be fought over. Not like it would’ve been for me.

Back into the school year we went, and through the long grey winters months we’ve trudged. First Grade seems to be a blast for him. I learned halfway through the year that Zach had been assigned a special reading class for those who are way ahead of the rest of his class, in an effort to keep him from being hideously bored. I was very, very proud.

Bedtimes came back with the school year, and so too did the suggestion of Harry Potter. No fights, no pressure. If they want to hear it, I want to read it. I’m happy to report that, with the memory of us fighting about it long in the past….they do want to hear it. In September, we resumed Sorcerer’s Stone. It is now March and we are halfway through The Goblet of Fire. When I finish reading for the night, I lean against Zach’s bed and we discuss what we’ve read and what’s happening…in whispers, in the dark, because his younger brother’s fallen asleep already.

My handwriting is better than his. Nyah.

Two days ago, Zach got to stay up late for the weekend, provided he stay in bed and just read. He read something like fifteen books, all of them terrific (most of them science. The kid is obsessed with science and history.). He was so excited to have read so many that this morning, he sat with a notebook and began keeping a Reading Journal…just like me. (My handwriting is better though. Nyah nyah.)

Yesterday, I gave him free reign of the huge coffee table books I have filling up shelves, and he spent hours pouring through huge books on the Universe, on Coral Reefs and Mythology and Charles Dickens and a mammoth tome covering every single day in the 20th Century. He has half a dozen bookmarks sticking out of books on my shelves now, fluttering around. His bookshelf is so overloaded, it’s in danger of collapsing. It’s so regularly picked through, I have to reorganize the damn thing every single day. I don’t mind.

I wish I could say that at the start of summer, I’d had a grand plan here and a lot of faith, but I didn’t. What I had was two fairly simple opinions. One, that I love ‘im and I don’t want to spend all my time fighting with him, not even over reading. And Two, as I said before…reading should be come to willingly and with excitement, and not forced. If he came back to it excitedly, I would be thrilled. If he didn’t, well, it’s not the end of the world. We would’ve found other stuff to be excited over.

But fortunately, he came back to reading, and I am over the moon. Not least because I am having so much fun reading Harry Potter, with as many voices and accents as I can keep straight, and a son who perks up and interrupts me to tell me what the word “Sirius” really means.