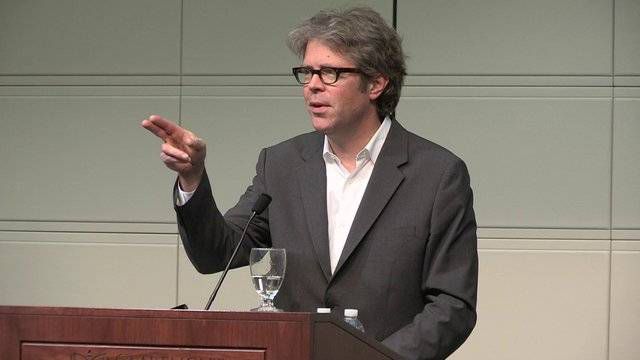 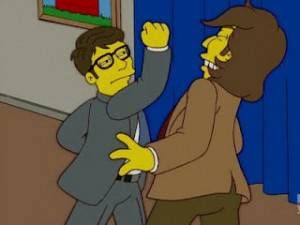 Franzen offers a swift upper cut….to just about everyone.

Last Friday, The Franzen — he, The Jonathan, of some writerly repute for novels of the paper variety — unleashed upon the world 6,400 words decrying just about everything invented after 1995. This piece, published on the Internet (Guardian, to be precise), was actually an excerpt from an upcoming book on Karl Kraus, an Austrian satirist and essayizzzzzzzzz. (Sorry, what happened?)  So if you have $27 and a streak of masochism, you can pick up The Kraus Project: Essays by Karl Kraus on Oct. 1.

And but so, chances are, you haven’t traversed Franzen’s entire excerpt, which Guardian link-baitedly titled “Jonathan Franzen: what’s wrong with the modern world.” It’s okay — we understand, you probably got the gist on Twitter anyway. And, it’s not hard to find summaries of the piece around the web — here’s a particularly good one from Vulture. But if you want a few easy jokes at The Franzen’s expense, follow along below as I “live blog” a reading of the full piece.

The First Chuckle: About five paragraphs in, after quoting his beloved Austrian dude, and comparing a point his beloved Austrian dude is trying to make to today’s PC vs. Mac debate, Franzen comments on his annoyance at Apple’s advertising tactics: “The argument was eminently reasonable, but it was delivered by a personified Mac (played by the actor Justin Long) of such insufferable smugness that he made the miseries of Windows attractive by comparison.” Insufferable smugness, you say? Oh sweet, sweet pot — I’d like you to meet kettle.

Second Chuckle: Franzen tells us: “One of the worst things about the internet is that it tempts everyone to be a sophisticate – to take positions on what is hip and to consider, under pain of being considered unhip, the positions that everyone else is taking.” Wait, what? I’d say, much more so, the Internet actually tempts everyone to be a knuckle-dragging assbag. Have you read the comments sections?

Getting To The Headline-Maker: We’re not even 1,000 words in yet, and here we have the most-quoted sentence: “But I confess to feeling some version of (Kraus’s) disappointment when a novelist who I believe ought to have known better, Salman Rushdie, succumbs to Twitter.” The choice of words here is significant, and interesting — “succumbs to Twitter.” As if there were no other choice, and the venerable Rushdie did so on pain of irrelevance. This is Salman freakin’ Rushdie we’re talking about here.

<Lots more boring stuff about Kraus and Vienna in 1910, and how America in 2013 is similar, and some political stuff, and setting up his rail against technology>

Twitter Is Cigarettes: This is just a good ‘ol WTF?! “But not long ago, when I was intemperate enough to call Twitter ‘dumb’ in public, the response of Twitter addicts was to call me a Luddite. Nyah, nyah, nyah! It was as if I’d said it was ‘dumb’ to smoke cigarettes, except that in this case I had no medical evidence to back me up.”

<Franzen is quoting Kraus again. Explaining what Kraus means. Not succeeding in being interesting.>

Get a Haircut, Hippie!: Franzen complains that’s it too easy to look up stuff on iPhones instead of just remembering stuff. Then, this: “But I’m enough of a child of the 60s to see a difference between letting your spouse remember your nieces’ birthdays and handing over basic memory function to a global corporate system of control.” Dude, it seems to me that if you’re truly a child of the 60s, you’d welcome any opportunity not to have to store memories in your bong-resin and LSD-coated noodle.

<Whew, we’re at the halfway point. Time to take a break to check Twitter.>

We Wouldn’t Like Franzen When He’s Angry: “I was a white, male, heterosexual American with good friends and perfect health. And yet, for all my privileges, I became an extremely angry person.” Then, Franzen relates an anecdote about throwing German coins around a train platform in 1982 because he’s mad he didn’t score with a German girl in Munich. It’s a bizarre little tangent. But it’s a funny image.

<Some stuff about how being a novelist made him less angry, supposedly, how he came to admire Kraus, and how Kraus inspired him to expose Amuuurica’s contradictions in the same way Kraus had exposed Austria’s.>

<Some stuff about why Amazon is ruining books, specifically paper books.>

Oh, Franzen, I Can’t Quit You: Franzen questions how many Amazon reviews are legitimate (as many as 1/3 are not, he quotes some source), and then offers a scenario in which we’ll all be saved: “Maybe an economically significant number of readers will come to recognise the human and cultural costs of Amazonian hegemony and go back to local bookstores or at least to barnesandnoble.com, which offers the same books and a superior e-reader, and whose owners have progressive politics.”

Huh?: “Twitter’s and Facebook’s latest models for making money still seem to me like one part pyramid scheme, one part wishful thinking, and one part repugnant panoptical surveillance.” Franzen’s doctorate at Harvard Business School no doubt positions him well to tell internet businesses how to turn a profit. Oh, wait…

Wrapping Up: Franzen’s farewell: “As long as modernity lasts, all days will feel to someone like the last days of humanity.” Sheesh, what a drama queen.