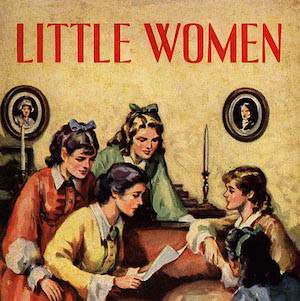 Little Women isn’t the kind of book that starts deep and passionate conversations…until you start talking about making a movie of it. Then we suddenly have very strong opinions. About everything.

Should there be one Amy who goes from tween to grownup? No, there should be 2 Amys and technically the whole thing should be in 2 parts like the original book.

Can’t you just cut Friedrich out of it so we can all pretend Jo and Laurie get together?

There’s a new adaptation of Little Women in the works with the sensational Sarah Polley at the helm. She’ll have to answer all these questions, but for now we can dream up how we’d like the casting to go.

Meg is a little Marmee in training, the kind older sister who looks out for the others. She’s the beauty of the bunch but it’s a character who can get a little bit lost if a strong actress doesn’t imbue her with an inner light. Elizabeth Olsen, younger sister of the well-known twins Mary-Kate and Ashley, has indie cred and the kind of charisma that makes you give her a second look and then a third.

Backup pick: Lupita Nyong’o. If Lupita wasn’t already over 30, we’d have her as our first choice. Doesn’t everyone want Lupita to be their older sister? But it might be a bit of a stretch to have her play a character half her age.

Jo is the central character, sharp and clever but often overbearing and short-tempered. The honest portrayal of Jo’s flaws is what makes her such a beloved character and it’s hard to cast anyone in the role because most readers see Jo as a version of themselves. But if we have to pick, we’ll take Saoirse Ronan. She’s an actress with serious chops and it’s a role with a history of not being played too strongly. Let’s be honest, Katharine Hepburn and Winona Ryder mostly play themselves in their movie versions. Ronan could method her way right into Jo, she’s played action and romance, and she played a similar spitfire of a character as Briony in Atonement in 2007. We want an actress who really brings Jo to life and Ronan is just the girl to do it.

Backup pick: Almost too many to list. Emma Watson, Mia Wasikowska, and Carey Mulligan were just a few of the names that went on my shortlist.

Beth is almost too good to be true as a character. She’s Jo’s closest comfort and confidant, but she gets to do little else besides be supportive and die young. Since Beth doesn’t age as much as the others, it’s perfect for a young actress and Hailee Steinfeld is one of the best up and comers at only 18. Sure, it’s not the showiest role of the bunch, but Steinfeld held her own while Bridges chewed up the scenery in True Grit, so we think she could hold her own here, too.

Amy is just 12 at the beginning of the book…and she’s not an old 12. These days we’d call her a tween (and a drama queen) but it’s a tough age to cast, especially if she’s expected to age a few years. It’s a real dilemma, but the Fanning sisters present a unique solution. (We can all agree Samantha Mathis as old Amy was a disaster we don’t want to repeat.) Now here, we can all feel good about Amy aging from 12 to 20 so it doesn’t feel like robbing the cradle when she gets with Laurie. Plus Elle has the perfect little-girl-feel for Amy’s early scenes, while Dakota will get everyone to finally take grownup Amy seriously.

This was the easiest pick of the bunch. Clarkson has played a lot of mom characters in her day, but she’s always the mom you want to take home right now. There’s just something about her that instills warmth and caring into everything she says. And if you really love Susan Sarandon in the ’90s version, Clarkson is about as close as you can get.

If you didn’t fall in love with Christian Bale in Newsies, you fell in love with him in Little Women. Laurie is dreamy and we have no qualms about casting a dreamboat in the role as long as he’s an actor with the ability to go head to head with Jo. Just look at the picture and don’t ask questions.

Friedrich ends up with Jo and that’s just the truth of it. To help all of us get over the trauma, it helps to make Friedrich extra hot in a European, middle-aged way. (See also: Gabriel Byrne.) And who is the best European middle-aged second choice husband we can think of? That would be Mr. Idris Elba, who could surely make Friedrich into everyone’s new favorite character. And please wear the glasses, Idris, they make you look very professorial.