LitHub has launched Book Marks, a site developed as the book world’s answer to Rotten Tomatoes. Once a book has been reviewed three times by an “important outlet of literary journalism,” those reviews are aggregated, fed through through a rubric, and a grade given. It could be a really handy tool for those who like to know what the book world is thinking about a book without taking the time to read through all of the (often problematic) reviews.

I’ve settled many a debate over which movie to see with a quick visit to Rotten Tomatoes. I don’t put much stock in movie reviews, but I do find it handy to have a one-stop spot for checking the consensus. That doesn’t mean I go with the consensus, but I like having it available to me. For this reason, I got really excited when I saw the announcement about Book Marks this morning. 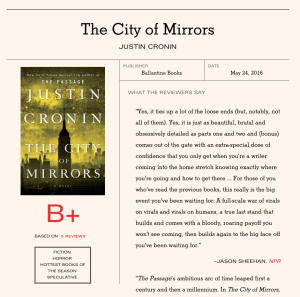 At first glance, it is what I want it to to be. It’s a well designed site, easy to use. Clicking on a cover takes me to what I want to see – basic publication information, snippets of reviews, and an easily accessible list of links to those reviews so I can take a look at the whole thing, should I so choose. But there are some problems.

I strolled over to the “How it Works” section to take a look at their methodology. The first red flag for me is the phrase “important outlets of literary journalism.” Their growing list of publications includes a variety of literary websites and mainstream newspapers and magazines. What it leaves out entirely is the book blogging community. They’re plenty important, too. There are a number of established bloggers out there that give honest, reliable reviews of every book they read – front or backlist, good or bad. A quick scan of Twitter, Goodreads, or Litsy would point you in the right direction. The publicists at the various publishers know them, too. Just ask. 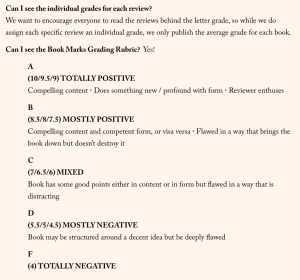 Then there’s the rubric. As a teacher, I hate rubrics. They are too general and don’t take into account the details. That’s the case here, too. Rubrics are often meant to be a way of making things more objective – a piece of writing, for example, either does certain things or it doesn’t. When you’re evaluating on the basis of grammar or spelling or something along those lines, that sort of thing works. When you’re evaluating a set of reviews, you can say that a reviewer does or does not think a book has compelling content. What you’re ignoring is what that reviewer considers “compelling.” That’s going to vary from reviewer to reviewer, from publication to publication. How one defines flaws and the severity of those flaws is going to vary, too. So, while Book Marks may be able to objectively grade the review, they aren’t taking into account the complete subjectivity of the reviewer. 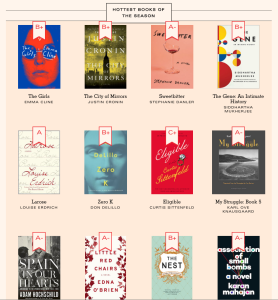 The flaws in their grading system are made visible when looking at any of the category pages. Yes, the site is just starting out, so the pool of books is limited, but a quick scan of the “Hottest Books of the Season” page reveals that the lowest grade given is a C+, to Curtis Sittenfield’s latest Eligible. It’s unlikely that this many books would have grades this high. Also, after looking through the reviews that they have quoted on the site for the Sittenfield and feeding them through the rubric, I think that C+ sounds generous.

Part of the appeal of Rotten Tomatoes has to be the bad review. That’s the whole inspiration behind the name. It’s not about singing the praises of every movie made. Reviewers don’t feel the need to find something good about every film out there. They tell it like it is, and, by and large, Rotten Tomatoes has provided a safe space for their reviews (which are taken from other publications and linked on the site). Book Marks seems to offer a similar space, but book reviews are not known for being quite so honest. There’s a natural tendency to step lightly with literature. Even a bad review isn’t brutal. A quick glance at those front pages in Book Marks could leave the casual reader thinking that every book published in any given year was pretty good – which we know is just not the case. It’s one thing to encourage people to read. It’s entirely another to make them think that all books are good books.

There are other issues, too, with the way the site is set up. Because it is tied so closely to the traditional publishing world, it will likely suffer from the same lack of diversity. It’s a surmountable obstacle, but it is one that will take some effort to overcome. This is another reason that pulling in reviews from other corners of the internet, the ones that aren’t so “important,” could prove to be quite useful. Titles pop up there (at least three times) that don’t get that much (if any) coverage in the traditional, mainstream literary media.

Then, of course, there is the question of whether or not Book Marks is something that we, as readers, even really need. The reaction that a lot of people seemed to have when they first saw news of the launch on Twitter was “But isn’t that what Goodreads is for?” Others, including the Washington Post’s Ron Charles, see little point in assigning grades or aggregating reviews at all.

@thelithub You know I love you, but this sounds like one more mash-up of voices to create some phony wisdom-of-crowds “score” for art.

@thelithub It’s the reduction of critical evaluation to a number that troubles me: the faux precision, the unearned authority of stats.

LitHub attempted to address his concerns, so that shows they are open to a discussion of how the site can evolve. Which is good, because some of their own promotions are sending some pretty mixed messages.

“Book Marks… can function as an alternative to Amazon, which has become a default source of information on books.” https://t.co/HMjSdLScpr

When most of us think of Amazon, we think of buying things, not seeking information. That happens, true. But it would seem that they would at least link to a book vendor if they wanted to be an alternative to the book vendor. That claim is going to cause confusion. And it’s going to be a long time before they have a library as comprehensive as that which can be found on Amazon or Goodreads or even Litsy (which is a pretty new kid on the block, too).

Bottom line – the concept of a site that aggregates book reviews is an intriguing one, but it seems to fill a niche that didn’t need to be filled in the first place. To make a go of it, they’re going to have to rethink things a bit.