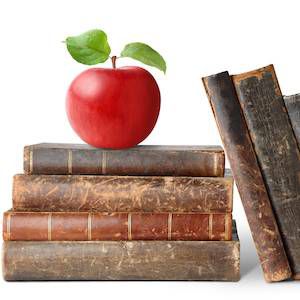 This post has gone through several incarnations as I’ve been musing about it. It started as a defense of having literature “shoved down my throat” in school. I wanted to argue that, while we do read for pleasure, it’s also important to be taught the elements of literature, just like we would be taught the basics of science, math, and history.

Then I thought, well, wait–does learning how to read a book give us the same practical tools that science, math, writing, and history give us? Is it as important to learn how to pick out a theme from a Dickens novel as it is to learn how the human reproductive system works? We still need to learn how to write and how to read critically (definitely there are a lot of people out there who could probably use remedial critical reading, am I right?), but literature, maybe not.

Plus, isn’t the literature curriculum usually kind of awful? I agreed wholeheartedly with my friend Laura when she said that The Old Man and the Sea is not for kids. When I look back over what I was made to read in high school English, I imagine that the selections were made by a stodgy old bureaucrat with a dartboard and zero passion for reading. Not only did learning about these books have no practical use, it also turned a lot of people off of reading altogether.

I abandoned that line of thinking quickly, though. I can’t say that literature shouldn’t be taught any more than I could say that art or music shouldn’t be taught. Literature is part of our cultural heritage, something that humans have been drawn to create since before we were able to forge tools that would record it. It’s not only a collection of nice stories, it’s a record of humanity. Evidence suggests that reading literature increases empathy. I think learning how to be a good human is worth the potential pain of slogging through Hemingway as a young teen.

So, literature’s in. Does it need to be taught in English class?

I remember English class as being a bloated mashup of grammar, paper writing, vocabulary drills, critical reading of nonfiction pieces, and literature. As the song goes (sing it with me, now!), “one of these things is not like the other.” I think literature tends to get a more utilitarian treatment being included alongside real-world skills. Not to mention, when taught as part of the English curriculum, teachers have to teach “to the test.” Standardized testing is the reason that everyone in my graduating class is still bloody sick of Hamlet.

Literature, I think, would fit in a lot better if it were taught in a culture unit along with art, music, and film. The rules of literature make more sense when paired with the other arts; in each, you can study the evolution of technique, different periods and movements, thematic similarities. These endeavors often co-evolved, since artist types hang out together and take inspiration from each other; I’ll be the first to cheer on a unit on punk and postbeat poetry, but a less edgy teacher still has many options. The Harlem Renaissance could cover novels, poetry, music, and visual art, instead of dashing off a couple of Langston Hughes poems and calling it good. Les Miserables could be studied alongside the work of Jacques-Louis David and Eugène Delacroix, who was in turn inspired by Lord Byron.

This class doesn’t even exist and I’m already jealous of it.

What do you think? Could literature flourish better in another setting, or should it stay with good ol’ English?