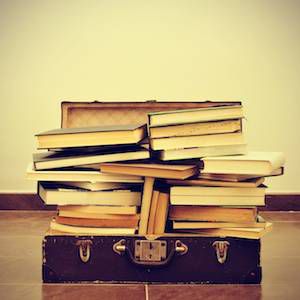 For the first time in years I’m actually taking a substantial vacation, one that involves airplanes and oceans and everything. Which also means that for the first time in years I can read travel books without experiencing crippling jealousy. Some stay-at-homers may find them inspirational, but those readers are clearly better, less petty human beings than I. The last thing I want to read when I’m trapped in the daily grind without hope of escape is a story about someone finding thrills or (God forbid) enlightenment in an exotic land.

The only exceptions to this rule are books featuring writers raising families in foreign countries. Examples include Four Seasons in Rome by Anthony Doerr; The Moon, Come to Earth, about Philip Graham’s experiences in Lisbon; and the seminal Paris to the Moon by Adam Gopnik. (Big miss, Doerr–should’ve called your book Quattro Stagioni Sulla Luna if you wanted to complete the trifecta.) I give these books a pass because the authors aren’t flitting about the globe for their own selfish purposes, they’re trying to immunize their offspring against a plague of Happy Meals and teach them what a globe really looks like. I can tolerate descriptions of lazy, late-night meals in piazzas and effortless visits to picturesque ruins by telling myself, “Think of the children.” Who knows, I may someday raise bouncing, bilingual babies of my own by following the good example of Messrs. Doerr, Graham, and Gopnik.

When my tickets are in hand and I can look at the rest of the world without envy, the time arrives to forget about formula and diapers and take up a tale or two by a solo sojourner. Even then I’m not looking for traditional vacation fare. I don’t want anything too breezy or yoga-centric, I want something weighty that will provide ballast on my trip. I want to learn something about a place that I wouldn’t find out on my own, to pick up details that the natives might not know, and understand how the author’s mind processes it all. Which shouldn’t preclude a healthy dose of fun, mind you. A tall order, I realize.

The classic travelogue that fits this bill is Black Lamb and Grey Falcon by Rebecca West. In her glamorous youth she was noted for her scandalous, decade-long affair with the much older H.G. Wells, but by the time she came to write her magnum opus she’d become a major-league intellectual and activist with a reputation that more than matched his. Black Lamb and Grey Falcon relates her travels throughout the Balkans in the period shortly before World War II, but it also covers about a thousand years of regional history. It’s still the book that offers the most insight into the confusing ethnic and cultural strife that continues to splinter what used to be known as Yugoslavia. And it’s entertaining, believe it or not.

What’s most wonderful about the book is the way West can digress so fruitfully in unexpected directions. Everything she sees and everyone she meets can inspire marvelous asides that other writers would build whole novels on. Like this bit, which is so good that I can recite it from memory:

Remember, when the nuns tell you to beware of the deceptions of men who make love to you, that the mind of man is on the whole less tortuous when he is love-making than at any other time. It is when he speaks of governments and armies that he utters strange and dangerous nonsense to please the bats at the back of his soul. This is all to your disadvantage, for in love-making you might meet him with lies of equal force, but there are few repartees the female governed can make to the male governors.

The only other travel writer I can think of who matches up against West’s literary firepower is Patrick Leigh Fermor, who died in 2011 at the age of 96, but not before completing a legendary trilogy. As an eighteen-year-old he walked across Europe, roaming for almost two full years from the English Channel all the way to what he romantically insisted on calling Constantinople, and recording the journey in three parts. A Time of Gifts and Between the Woods and the Water were published during his middle years, and the adventure ended just a few months ago in the posthumously-published The Broken Road. Fermor was an amazing figure (if you don’t believe me, just read the biography by Artemis Cooper; his military exploits alone will astonish you) and his writing style is as charismatic as he was in person.

Hmm. Between Rebecca and Paddy, I’m up to 2,100 pages. Guess I’ll need a bigger suitcase.