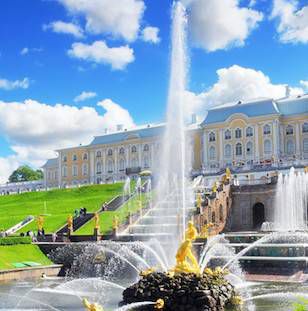 In my opinion, St. Petersburg is very underrated in terms of its vivid literary history. Almost every street corner and neighborhood have been written about by literary giants like Dostoyevsky, Gogol, Tolstoy, and Pushkin. Its people are proud of their literature. As a matter of fact, if you asked a child to recite lines from Eugene Onegin, he just might be able to do it.

But enough of my rambling- allow me to show you how exciting of a city St. Petersburg is.

If you loved Crime and Punishment, then you have to go to Sennaya Square. The large city square and surrounding slums are the setting for this iconic novel.  Take a stroll around the neighborhood and walk the same steps as Raskolnikov after he murdered the pawnbroker in her apartment. Go specifically to Kaznacheyskaya Street where Dostoyevsky lived in flats #1, 7 and 9. According to some scholars, Raskolnikov may have lived on Stolyarny lane and I’ll admit that that place definitely maintains a sinister vibe. Also, Sennaya Square is the setting for another famous tale:  The Nose by Nikolai Gogol. If you’re unfamiliar with the story, it’s about a man whose nose is missing one day and develops a life of its own. Make sure you pay attention to the sides of buildings as you’re walking around for you may see this:

About two blocks from Nevsky Prospect, the main thoroughfare of St. Petersburg, you will find Alexander Pushkin’s apartment (it’s been turned into a museum). As you may or may not know, Pushkin is considered the father of Russian literature. With the help of historical documents and recounts from Pushkin’s remaining family members, the apartment was recreated to match its original state. There, you can see Pushkin’s work study room and objects from him and his family members. There are very few places and items that you’re not allowed to touch. If you’re interested in learning more about Pushkin’s life and demise, as well as his legacy, go down to the basement where there’s an extremely informative exhibition. If and when you’re tired, no worries! Step outside to the courtyard where you’ll be greeted by lush, green gardens, as well as a statue of Pushkin himself.

Since you’re already on Nevsky Prospect, you have to go the most famous bookstore in the city:  Dom Knigi. The bookstore is open seven days a week and closes rather late in the evening—11 pm, to be exact. Here, you will find an impressive selection of foreign-language books, stationery, journals, maps, and travel guides.

There are always regular readings, children’s programs and other activities for book lovers. And best of all, if you get a little hungry from all of your perusing, go up to the upper level to dine at the cafe. It’s a little bit on the expensive side; however, you get a great view of Nevsky Prospect as you sip your tea with a new book in hand. It all evens out.

You must go to the Literary Cafe. A relatively inexpensive dining option, the cafe is divided into two parts:  a cafe downstairs and a more formal restaurant on the second floor.

Initially opened in 1816, Alexander Pushkin himself frequented this place, and a waxwork figure sits at one of the tables to commemorate his patronage. Diversify your palate with the Russian and European meals that are cooked with traditional recipes, and pretend that you are a literary titan yourself.  You won’t be disappointed.

If  you get off at the metro stop of Vladmirskaya/Dostoevskaya and walk a few blocks, you’ll run into the Dostoevsky Museum. Trust me, you’ll know that you’re in the right place because you’ll see a monument of Dostoevsky just so visitors like yourself will be able to verify that this area is his territory. Similar to the Pushkin museum, Dostoevsky’s last apartment was recreated in order to show its primary state.

As soon as you walk through the door, you will see Dostoevsky’s hat and coat hung on on the rack–and you’re allowed to touch it!  Keep walking through the corridors and you will find his children’s play room along with their toys, the dining room, letters exchanged between he and his wife, and his work study room, where he wrote his last novel, The Brothers Karamazov. The museum itself is comprised of four parts: his apartment, the literary exhibit, exhibit halls, and a small theatre. It contains a large collection of memorabilia, photographs, and graphic and applied art that steadily increases due to support from scholars, friends of the museum, and visitors.