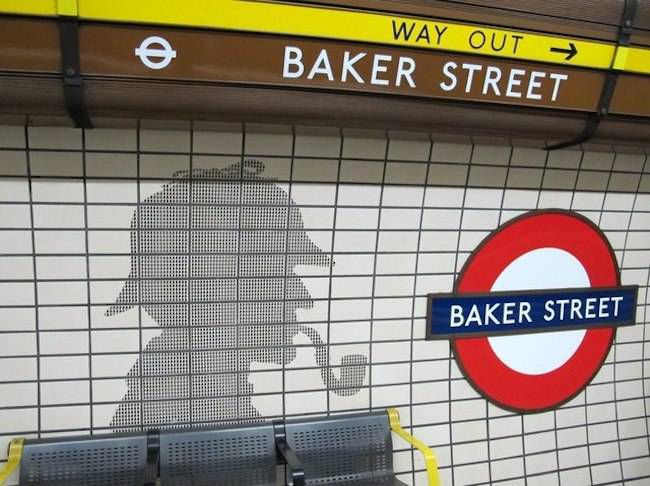 For the average bibliophile, popping over to 221B Baker Street while in London or strolling past the statue of Sherlock Holmes in Arthur Conan Doyle’s hometown of Edinburgh will probably satisfy your Sherlock-related travel cravings. But if you’re a Sherlockian, that’s not even the tip of the iceberg. You don’t want to just say hey to the character of Sherlock, you want to walk with him along the mist-shrouded streets of Victorian London. And, despite the damage the Blitz rendered to the city he called home, you definitely can. According to one estimate, there’s approximately 200 Sherlock sites in London alone, and there are even more Sherlock Holmes attractions all around the world. Here are just a few of the most notable.

221B Baker Street–You kind of have to go to 221B Baker Street, even if the address itself didn’t exist in Conan Doyle’s time. He refused to divulge the “true” location of Sherlock’s apartment (wisely–just think how annoyed the detective would have been by all the visitors), leaving modern scholars to puzzle it out with Alan Turing-esque decoding techniques. In the meantime, some enterprising person slapped 221B on a building and started cashing in. That’s why 221 is between 237 and 241 Baker Street instead of, you know, 220 and 222.

I know, it’s disappointing. The home of a fictional man is, in fact, a fiction. But even though 221B is a red herring, you’ll still want to pop into the gift shop so you can spend your hard-earned pounds on Sherlockian tchotchkes. 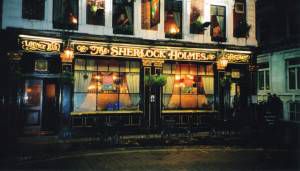 Photo by Kafziel via Wikimedia Commons.

If 221B isn’t touristy enough for you, or if you’re feeling a bit peckish, you can pop in at the Sherlock Holmes Pub and Restaurant, which permanently houses the Sherlock Exhibit curated for the 1951 celebration of Great Britain. That’s not the pub’s only Sherlock connection: It used to be called The Northumberland Hotel, the name of the hotel Sir Henry Baskerville stayed in in The Hound of the Baskervilles. Items you can view here include Dr. Watson’s service revolver and a replica of Sherlock’s study that’s considered “the most authentic” version. Why? I don’t know.

Or, if you *really* want to impress your friends with your Sherlockian knowledge (not to mention taste in cuisine), you can eat at The Criterion in Piccadilly Circus, the restaurant where Watson first met Holmes in A Study In Scarlet. Other London locations straight out of the Sherlock stories include The Langham Hotel, which was featured in both A Scandal in Bohemia and The Sign of Four, and Briony Lodge in St. John’s Wood where Irene Adler lived. (For further reading on the numerous London sites that can found in the Holmes stories, check out Finding Sherlock’s London: Travel Guide to over 200 Sites in London.)

Love libraries? Of course you do. Visit the Sherlock Holmes Collection at Marylebone Library in Westminster, which has a unique collection of Sherlock Holmes-related photographs, newspaper clippings, journals, and ephemera. Open by appointment only.

Devon was the location of Sherlock’s most famous adventure, The Hound of the Baskervilles. Using Princetown as your home base, you can walk Fox Tor Mire, the basis for Grimpen Mire (and as treacherous in real life as it is in fiction–don’t tackle it without a guide); and Bellever Tor, the likely location of Lafter Hall. There are also rumors of a “Baskerville Experience” Sherlock-themed dinner, although I couldn’t find a website so it might not still be in operation. 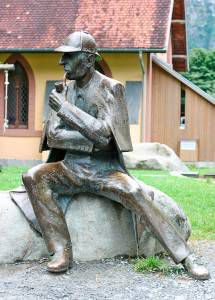 Image by Juhanson via Wikimedia Commons.

Geography time: Reichenbach Falls, the scene where Sherlock Holmes met his untimely and un-endy end, is located in Switzerland. Not only can you visit the falls (along with a fun and overly poetic plaque commemorating the occasion), but if you meander back to the nearby town of Meiringen, you’ll be able to sleep in the hotel where Sherlock spent his last night, view another plaque beside a statue of Sherlock contemplatively smoking his pipe, AND visit the local Sherlock Holmes Museum, located in the basement of an English church. 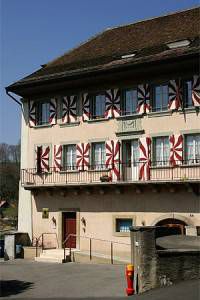 Weirdly, Switzerland has not one Sherlock Museum, but two. Arthur Conan Doyle’s son, Adrien, moved to the town of Lucens–located between Lausanne and Lake Neuchatel–in 1965 and set up his own Sherlock Museum in the Château de Lucens. Now located in the “Maison Rouge” and managed by the city, the museum claims to have THE MOST authentic Sherlock items. But where it really stands out is in its plethora of Conan Doyle memorabilia and archival material, first editions, and a resident cat named Watson.

The Algonquin Hotel in NYC was one of the major settings of The Sherlockian, a novel based on the real-life mysterious death of Baker Street Irregular, Richard Lancelyn Green. And of course, the hotel has numerous other literary connections that should delight any reader, Sherlockian or not.

The Mysterious Bookshop, also in NYC, is one of the oldest mystery bookshops in the US. It’s a New World mecca for Sherlockians and has been known to attract Baker Street Irregulars due to its fantastic collection of Conan Doyle first editions and Sherlockian ephemera. Take this lucky find from David McLaughlin, for example:

…the back wall of the bookshop’s main floor is crowded with fan fiction and criticism about Sherlock Holmes and other mystery characters, [but] the basement rooms are where the real magic hides. There, among an assorted pile of books and papers, I found an old Christmas card, unsigned and unsent, from 1963. On the card’s front cover was printed a color map of southern England and Wales. The inside cover claimed that this map was ‘The Sherlockian Map of England’, first drawn by Julian Wolff, long-time leader of the Baker Street Irregulars. 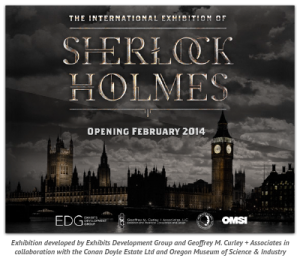 Finally, The International Exhibition of Sherlock Holmes is currently touring the US through cities like Denver, Seattle, and Dallas. The show promises to let you walk Victorian London side-by-side with Conan Doyle (creepy-ish) while helping Sherlock solve crimes. Visit the website to find locations.