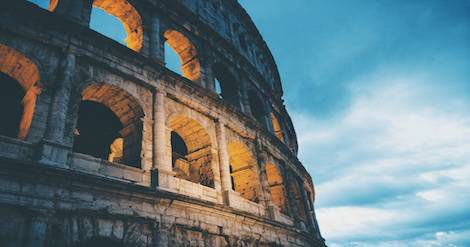 My boyfriend and I had planned this intense two-and-a-half-week vacation to Skopje, Macedonia, over New Year’s, and I had so many bookish places mapped out for y’all that it would have blown your mind. Unfortunately, a few weeks before our trip, the airline we were booked through stopped offering flights to Macedonia. Unable to find another flight that wasn’t outrageously priced, we were left with no choice but to spend those two and a half weeks in a city we were supposed to have only visited for a few hours due to a connecting flight: Rome, Italy. Yes, I know – just tragic.

Of course, no, it isn’t. Rome is one of the most magical and history-laden places I’ve ever been, with ancient ruins everywhere and people driving down the middle of the road all the time, even on interstates and on windy hilly roads in the pouring rain, and there were tiny, tiny bathrooms. The only actual unfortunate thing about our trip was that I had to scramble to find the best bookish places. As is typically the case with life, this ended up being a blessing in disguise as I fell upon unique bookish place after unique bookish place.

This issue of literary tourism does not include every bookish place in Rome. It doesn’t include Antico Caffé Greco where a host of literary favorites were known to dine, including Gogol, Keats, Mary Shelley, Charles Dickens, and on and on, or any of the literary houses (like Keats-Shelley house) but it does include places I found books and bookish goods where I least expected. 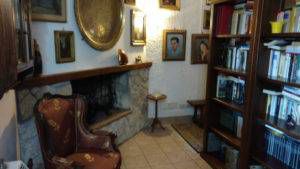 apartment in a small Medieval Village about 30 km north of Rome. At our check-in I was delighted to discover that there was a pretty impressive library in said apartment, complete with fireplace and comfy chair. Italy was looking good! 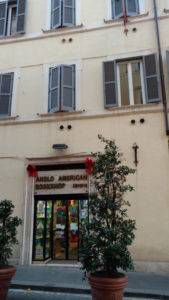 Our first walk down the streets of Rome led us right by a bookstore: The Anglo American Bookshop. Near the city center, it’s right smack dab between the Spanish Steps and Via del Corso, which makes it a great place to take a break between break-neck touristing. This bookshop was fairly large compared to other bookshops I saw in Rome (though still smaller than my Indie) and had a nice mix of fiction, non-fiction, and Roman-centric books, though the highlight was the wall covered in black Penguin classics. 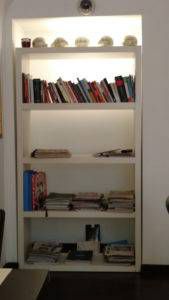 After doing a bit of ohh and ahhing over the cobblestone streets and ancient beauty everywhere, we popped into a local restaurant for lunch and discovered shelves on every wall, with books, magazines, and games. There weren’t books just lying around every restaurant we went to, but they were very common in smaller shops and bars (which are actually coffee shops in Rome, not booze fests – though you could buy booze at them so maybe they were booze fests? Rome is confusing!). Typically they included about 80% books in Italian and 20% books in English. Great news if the company you’re traveling with is boring! 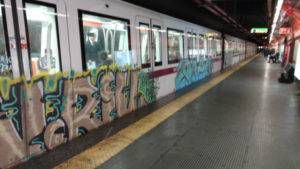 Rome is beautiful but it’s also shockingly covered in graffiti. Depending on your personal opinion of these things, that may be a pro or con, but it does mean you’ll never be without words to read, although not only are you trying to parse graffiti, which is already difficult to read, it’s in Italian. So, you know, good luck with that!

We were also constantly stumbling upon book “stalls” on the road (read: pall 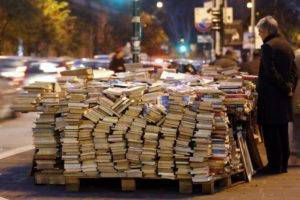 ets with thousands of used books stacked on them) though the number of options was deceiving – I dare you to grab a book beyond the first two layers. There didn’t seem to be much rhyme or reason to the pricing either; if you found something you wanted you just sort of waved it around and then the purveyor ran over and held up some number of fingers and then you gave them that number of Euros. It really wasn’t a bad system, all things considered. 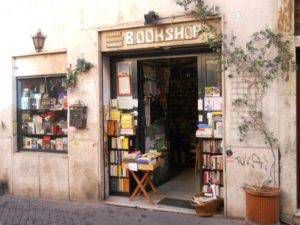 Rome actually had a somewhat surprising number of English language bookstores, including the incredible Open Door Bookshop. Located in the ultra-hipster neighborhood of Trastevere (yes, hipsters really are everywhere), this spot is a fantastic second-hand indie with stacks and stacks of books inside. As with most used bookstores, the selection is always changing so it’s a different experience every time you visit. 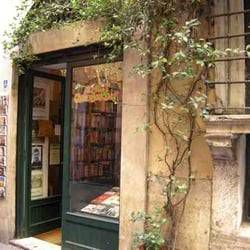 You only have to go a few blocks from the Open Door Bookshop to find the Almost Corner Bookshop. If the name doesn’t clue you in to the fact that it’s adorable, hopefully the the ivy topped door or the overly-friendly and boisterous employees will convince you. This is an all-new bookshop with mostly fiction and small – though impressively curated – mystery and non-fiction sections.

Food, books, more food, and more books – it was a great trip, and though I can’t confirm that every road leads to Rome, I can confirm that quite a few roads lead to books. And cappuccino. Lots and lots of cappuccino.