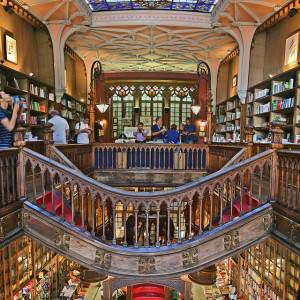 There is much to see and do in Portugal.

Portugal is a sort of promised land for us bookish types, as it has a few sites that I am in awe of (and you will probably be, too). Regular readers of Book Riot may know what is coming.

The Oldest Bookstore in the World

The Bertrand Bookstore in Lisbon, Portugal has been open since 1732 and is regarded as the oldest bookstore in the world. It had to change locations in 1755 when the original place was destroyed in an earthquake. We had a post about the bookstore back in June of last year. The bookstore was to be the hub of Lisbon’s cultural life and is now the first of about 50 chains of Bertrand bookstores in Portugal. But like with so many other things, you have to see the original.

The Most Awesome Bookstore in the World

This is the Lello bookstore in Porto. Jeff wrote an article about it a while back (make sure to read it and check out the last photo in his article). The interior of the bookstore, like most others, is really where the magic happens. An amazing staircase that twists in on itself and has shiny red steps is the centerpiece of the store’s gothic look. I’d like to spend a day on the upper floor, just gazing down.

Oh, and browse books, of course.

In 2011, the travel publishing company Lonely Planet classified Lello as the third best bookstore in the world.

The Most Awesome Library in the World

The thing that makes this library truly stand out, apart from just looking really beautiful, is the fact that it is guarded at night by bats. The library is located in Mafra, and is just a short distance up the coast from Lisbon, so it can very well be visited on the same trip.

Legends tell of giant rats inhabiting the library, going out at night to hunt cats and dogs and people, and also of an underground tunnel linking the library to a small fishing resort nearby.

The Tower/Tunnel of Area X

And if you are in that area you can also go see the tower that inspired a part of Jeff Vandermeer’s Southern Reach Trilogy, which has been on many best-of-the-month lists here on Book Riot, namely the tower/tunnel that the characters find and explore. The inspiration came from a tower in Sintra in Portugal.

Long after finishing Annihilation, I realized my subconscious had come up with the argument over whether what the expedition finds is a “tower” or a “tunnel” from a trip to Sintra in Portugal, which includes a tower-tunnel. The tower/tunnel in my novel looks different, however.

So the main part of a trip to Portugal includes sites in and around Lisbon, and a jaunt up the coast to Porto to see what is quite possibly the most awesome bookstore in the world.