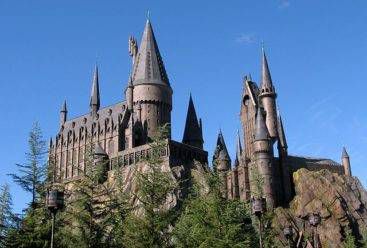 Books probably aren’t the first thing that comes to mind when you think Orlando. You may know of a few novels set there. Paper Towns is a well-known example. Their Eyes Were Watching God, which takes place just north of Orlando, is another. Don’t let the shortage of books set here fool you. Orlando is jam-packed with bookish things to do and see. Literally, it would take you weeks to experience all of them. Here is some of the best literary Orlando has to offer.

Theme parks abound in Orlando. Many of the attractions at the Magic Kingdom are loosely based on classic fairytales. The book-nerdiest theme park in Orlando has to be Islands of Adventure. Comics lovers can geek out on Marvel Superhero Island, where you can blast through the Incredible Hulk steel coaster, snap pictures with Spidey, and take a Fearfall with Doctor Doom. Other bookish spots in Islands of Adventure include Jurassic Park, Seuss Landing, and of course, the Wizarding World of Harry Potter.

The Wizarding World is worth the trip to Orlando alone, in my opinion. Any Potterhead who hasn’t been there is severely missing out. While Universal Studios is decidedly less literary, you can hop the Hogwarts Express from Islands of Adventure and arrive in Diagon Alley. It’s like taking a ride into your imagination. Get ready, Gringotts!

Tucked into the quiet northwest Orlando neighborhood of College Park, you’ll find the tiny blue house where Jack Kerouac wrote The Dharma Bums. He was also living there when On the Road hit the big time. That legacy, plus some local ingenuity, has made Kerouac House an institution in Orlando. It houses the Kerouac Project, which offers public readings, writing workshops, and a writers-in-residence program.

The great Zora Neal Hurston—folklorist, anthropologist, and fiction writer best known for the novel Their Eyes Were Watching God—hailed from a tiny town close to Orlando called Eatonville. Eatonville is one of the first all African-American town incorporated after the Civil War. The Zora Neale Hurston National Museum of Fine Arts celebrates that heritage by showcasing artists of African descent and hosting Zora Fest, a street festival that celebrates the life and achievements of Zora Neale Hurston. Zora Fest takes place yearly in late January. Don’t miss it!

Bookmark It is Orlando’s own indie bookstore. With five locations in the greater Orlando area, Bookmark It is a pillar in the Orlando literary community. Bookmark It takes pride in local authors and publishers, making an effort to carry Floridian literary magazines and books by nearby small presses. Each of the locations is friendly and unique. They’re the perfect places to get away from the hubbub of your Orlando vacation and snag an awesome book.

There’s no shortage of comic book stores in Orlando either. While you’re decking out in your cosplay for MegaCon, be sure to visit some of Orlando’s homegrown comic shops like Sci-Fi City, Gods & Monsters, and Coliseum of Comics!

No write-up of bookish Orlando could be complete without our very own small publisher: Burrow Press. A fab lit haven complete with its own “secret” society, Burrow Press brings literary life to Orlando by publishing books, releasing  a literary magazine called Fantastic Floridas, raising money for inner-city literary arts, and putting on their Functionally Literate reading series, which has welcomed authors and speakers like Lisa Lucas, Lauren Groff, and Jeff VanderMeer.

Next time you’re in Orlando, remember there’s a wide-world of bookish fun outside those theme park gates. Come enjoy a reading, check out some local literary history, and cozy up with a Florida book at one of our fabulous indie bookstores.