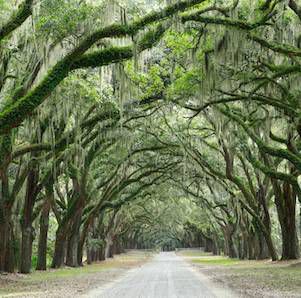 I grew up all over the country as a military brat, but the first time I spent any significant amount of time where I could settle into a place and feel comfortable making friends was in Columbia, South Carolina. I spent five years – from 8th grade until I graduated from high school – in the Palmetto State and fell in love with the easy comfort that’s inherent in the South. I wish I’d been able to do more bookish exploring of the state, but that’s the downside of not having a driver’s license for most of the time I lived there.

I want to make up for lost time. So let’s go on a literary roadtrip! We’re going to start and end in Columbia, SC, in the exact center of the state, head through the low country to Charleston and down the coast, through Beaufort, to Savannah. Once we explore those historical cities, we’ll swing through the southeastern countryside of Georgia, back up to Augusta, and completing the circle to Columbia.

I highly suggest starting your visit in mid-May- the first reason is that the SC Book Festival begins around then every year in Columbia. In 2015, it runs from May 15-17, and features writing workshops on Friday, with readings, signings, panels and other literary events on Saturday and Sunday.

Once the festival is over, spend a couple days exploring the literary treasures of Columbia. The University of South Carolina’s Irvin Department of Rare Books and Special Collections in particular features the most extensive collection of F. Scott Fitzgerald’s work and associated documentation, including manuscripts, screenplays, paintings, contracts – even work by Zelda Fitzgerald.

And if you can, check to see if the South Carolina Shakespeare Company is staging a play in downtown’s Finlay Park, one of the best outdoor venues I’ve seen for Shakespeare performances.

If you haven’t realized it yet, South Carolina is also Pat Conroy country, so just wandering around downtown Columbia, the University of South Carolina campus and Five Points will give you some small insight into the settings of some of his books.

From Columbia (don’t worry, we’ll be back), head down I-26 to the lovely city of Charleston.

Once you’re in Charleston, check out the Charleston Library Society where they have lots of really cool rare books. Like first editions of Charles Dickens’ novels, an extensive collection of Henry Wadsworth Longfellow poetry, and tons of documents by historical figures and Carolina artists. Plus tons of great events happen all the time. It celebrated its 100th birthday in its current building, but it is actually the oldest library in the South, marking 267 years in existence this year.

Also worth checking out in Charleston is the Karpeles Manuscript Library (which is one of many in the U.S.). It’s heaven for history nerds, but they also have an exhibit on Mark Twain, and a number of rare documents and manuscripts, like the first Roget’s Thesaurus.

As we’re making our trek in May, (reason #2 for choosing that time) the concurrent festivals of Spoleto and Piccolo are absolute must-dos. Celebrating art in all its forms, the two events run for 17 days (SEVENTEEN!!) and feature theater, dance, opera, jazz, classical music, visual art, and of course literature. Spoleto, the U.S. version of an Italian festival, has more national and international artists, while Piccolo is focused on local Southern artists.

Piccolo in particular does some pretty spectacular literary events, including a series of sundown poetry readings and an event “dedicated to the craft of fiction” which invites several writers to share short pieces that all have to start with the same phrase or sentence. So cool. This last May, they even had an event with Pat Conroy on the campus of The Citadel, the military academy in Charleston, of which he is an alumnus.

If you happen to be in Charleston during November as well as May, check out the YALLFest (oh yeah, they went there), which is the Charleston Young Adult Literature festival. It draws some amazing authors and is definitely worth a trip down.

Of course Charleston has some fantastic bookstores, but my favorite of the bunch is Blue Bicycle Books, a used bookshop that also is the local sponsor of YALLFest. They are fantastic supporters of the local literary community, running a creative writing camp for kids every summer and helping to publish a poetry magazine from the kids in Downtown Charleston’s only public high school.

Plus they occasionally do readings in the most adorable courtyard out back.

We’re going to move down the coast to the sleepy coastal town of Beaufort, SC, but definitely explore more of Charleston if you have the chance.

Beaufort is not far from Charleston, but it’s got some serious literary and film chops. It served as the setting for The Big Chill, the movie version of The Prince of Tides, and portions of Forrest Gump. You can visit the Rhett Inn, named for the prominent Beaufort family that Margaret Mitchell also used as her inspiration. And take a tour where you can visit some of those famous movie locations, like the The Big Chill house and the giant tree that Forrest and Jenny hang out on, and you can also see Pat Conroy’s childhood neighborhood, which influenced so many of his books.

Don’t forget to pick up a signed first edition of one of Conroy’s books at McIntosh Book Shop, which usually has a number of them on sale.

From Beaufort, continue down the coast to Savannah, Georgia, the home of – among others – Flannery O’Connor. You can visit her childhood home in downtown Savannah and see some of the sites of her life, like the Catholic church across the street where she attended.

One of the unmissable literary adventures of Savannah is the walking tour based on John Berendt’s bestselling novel Midnight in the Garden of Good and Evil. On the tour, you’ll stop into the Bonaventure Cemetery, where Southern poet Conrad Aiken is buried. Make a point to take a stroll by his two primary residences, just next door to each other on E. Oglethorpe Ave.

Leaving Savannah, we’ll take a wide swing through rural Georgia up to Milledgeville, GA where you can visit Andalusia Farm, where Flannery O’Connor lived for the last 13 years of her life, and where she wrote two novels and two short story collections. The farm is open for tours and is in much the same condition as it was when O’Connor died of lupus in 1964.

Just a couple of miles down the road in Eatonton is Alice Walker’s birthplace. Take a tour of Southern Manor Farms, her childhood home. You can also take a self-guided Alice Walker driving tour by picking up a brochure from the Chamber of Commerce office.

Eatonton is also the home of author Joel Chandler Harris, who wrote the Uncle Remus collection featuring Br’er Rabbit, Br’er Fox and Tar-Baby. The city’s slogan is “Welcome to the Briar Patch” which is reflected by all the rabbit statues scattered around town. Make sure to visit the Uncle Remus museum, which has one of the largest rabbit statues out front.

From Eatonton, head back east and make a quick stop in Augusta to see the Stephen Vincent Benét House, which is on the campus of Augusta State University. Benét is most famous for his Pulitzer Prize-winning novel John Brown’s Body and the short story “The Devil and Daniel Webster,” which has since been made into a play and an opera.

If you’re looking for a good bookstore to pick up books by any of these Georgia authors, check out Augusta shop, The Book Tavern. They also host some great events like the writing group The Stalwart Storytellers’ Union.

From Augusta, make your way back up I-20 to Columbia, and if you haven’t quite had enough, check out one of my favorite bookstores, The Book Dispensary, for any last purchases before you finish your Lowcountry Literary tour.