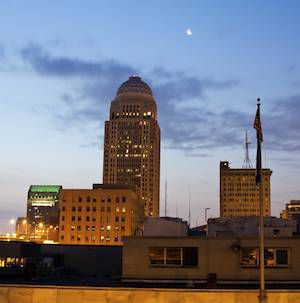 I visited this charming Southern city on the Kentucky/Indiana border several years ago to give a paper at a literary studies conference. All I knew about it was what my dad had told me, since he had lived there for a time a few decades earlier- but much had changed since then. The Louisville I saw was a vibrant, creative city with a rich literary culture. Come on, let me show you around:

Rucker even used Louisville for the Earth-bound scenes in his biopunk scifi novel Wetware (1988).

And while F. Scott Fitzgerald wasn’t a Louisvillian, he did make extensive use of the city in The Great Gatsby. Apparently, his stay at the famous Seelbach Hotel in 1918 (while posted to Camp Taylor for military duty) impressed him so much that it inspired the setting for Tom and Daisy Buchanan’s wedding.

You might also be surprised to learn that one of the greatest collections of C. S. Lewis’s books and letters is housed at Louisville’s own Southern Baptist Theological Seminary.

And then, of course, there’s The Bard’s Town, a restaurant, theater, and lounge all rolled into one. But best of all, it features such dishes as “Love’s Labour’s Loin-ee-Pops,” “Much Ado About Empanadas,” and “Cymbeline-guini.” I KNOW!

The Louisville Free Public Library officially opened in 1908 to serve its community, and has always focused on providing a vibrant children’s library, while the University of Louisville Libraries include collections devoted to art, health sciences, law, and music. It also offers fascinating exhibits and inspiring events.

Louisville also boasts a not-for-profit literary press called Sarabande Books, Inc., which has published such authors as Louise Glück, Gerald Stern, Sallie Bingham, and Alice Fulton. According to one of its founders, Sarabande Books strives to “publish poetry and fiction and to disburse the works of its authors ‘with diligence and creativity.'”

The Louisville Review, too, strives to find and publish talented writers from around the country. Founded in 1976 at the University of Louisville (now housed at Spalding University), TLR has featured writers as diverse as David Ray, Ursula Hegi, Louise Erdrich, and Alberto Rios. According to its website, TLR‘s “goal continues to be to import the best writing to local readers, to juxtapose the work of established writers with new writers, and to export the best local writers to a national readership.”

A multitude of used and independent bookstores offers readers a wide variety of fiction, nonfiction, poetry, and more. A Reader’s Corner  has provided bookish Louisvillians and visitors with a huge choice of new, used, rare, and out-of-print books since 1997. All Booked Up (located on Bardstown Road, you guys), along with its general stock, specializes in children’s books and Kentuckiana. Great Escape (also on Bardstown Road) specializes in science fiction. They also offer DVDs, CDs, comic books, role playing and card games, and more.

Speaking of comic books, be sure to check out Comic Book World Louisville, Zone Comic Shop, and Role of the Die.

And what kind of a place would any city be without its Shakespeare Festival?! Luckily for Louisvillians, Kentucky Shakespeare exists to dazzle audiences with Bard-ish goodness. The oldest free Shakespeare festival in the country gives yearly performances in the C. Douglas Ramey Ampitheatre in the city’s historic Central Park.

Also, the non-profit Louisville Literary Arts hosts an annual “Writer’s Block Festival”, which includes speakers and workshops. Planned for November of this year, the festival will welcome poet Dave Baker and novelist Jacinda Townsend to read from their work and conduct workshops. The keynote speaker will be poet and memoirist Nick Flynn.

Stay up to date with all of Louisville’s literary happenings on Facebook and Twitter with “Keep Louisville Literary”.