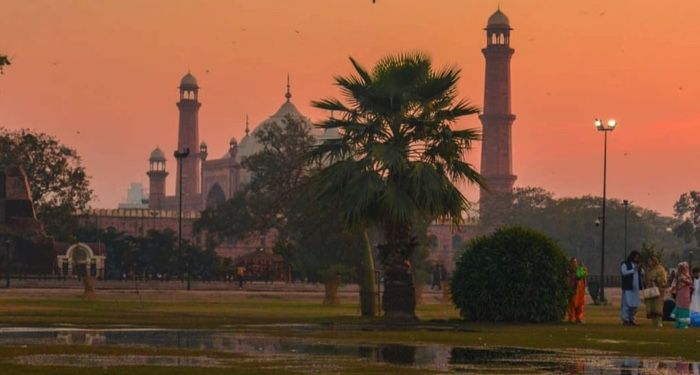 “Lost in its own silent rhythm, the Ravi sings its song.
In its undulating flow I see the reflections in my heart—”
—Muhammad Allama Iqbal, translated by Parizad N. Sidhwa

On the banks of River Ravi, under the sweltering heat of the summer, is a small city that holds the heart of Pakistan—Lahore. In a city where your hair sticks to the nape of your neck, and cold water gets warm faster than you can drink it, embarking on literary adventures is not on many people’s minds. That is what I thought, until I started exploring. At the center of it all stood a rich, literary city.

Readings is one of the largest bookstores in Lahore and quickly becoming one of the largest distribution networks in all of Pakistan. Founded back in 2006, it started off as a used bookstore. This is the place where I first discovered my love for many books including Mary Higgins Clark, where I bought so many of her paperbacks in bulk, each selling for 25 rupees (around 15¢). Ever since its inception, you can find Readings kiosks at various coffee shops all across Pakistan. Their selection is carefully curated and constantly on the rise.

In a country where books are not very accessible, Readings has developed one of the largest delivery services around Pakistan, allowing people from far off cities to get books in a matter of days. On a visit to Lahore, a visit to the iconic Readings is a must. If you are lucky, you can find a stall for a hot cup of tea right outside the shop served in small shot glasses or clay pots. Having tea is a must, even if it is 105º Fahrenheit outside.

Urdu Bazaar is found in the Walled City of Lahore. Lahore rose to prominence as the Walled City during the Mughal era, a place where the emperors would take cover against any impending attacks. During their reign, they also built numerous monuments such as the famous Badshahi Mosque, which is now the headquarters for the UNESCO World Heritage Center.

You can find Urdu Bazaar at the center of this locale. It is the heart of all things printing and writing. Most of the books published in Pakistan are printed here, and it is accessible to everyone. From flyers to 600 page books, you can have it all printed and bound. A lot of rare works of Urdu and Persian literature are available here in their original language, including works of Manto, Faiz, and Ghalib. From colored felt tip pens to wooden pencils with their own ink pots, all your basic stationery can be found here. If you run out of bullet journal supplies, this is the place to go! It is an area consisting of narrow alley ways and is best to explore it on foot.

Ferozsons is one of the most prolific publishing houses in Pakistan. They are on a mission to publish as many Pakistani voices as possible. With their own bookshops and distribution centers, they have made the dreams of many flourishing Pakistani writers come true, especially those without access to any international platforms. This is the best place to find published works by upcoming Pakistani voices.

Faiz Ahmed Faiz, who was frequently imprisoned for his Marxist political beliefs, wrote ‘City of Lights’ while gazing upon the glow of Lahore’s lights from his prison cell. He says:

The greenery is dying in a pallid afternoon;
parched walls are wet hued with a lonely poison.
Far to the heart’s horizon shrinks, rises, falls again
The fog of an undimmed grief, a heavy tide:
And yet behind this fog rises the City of Lights
—Translated by Sara Suleri Goodyear

If you find yourself unable to travel, you can always travel to Lahore between the pages. Mohsin Hamid’s novel Moth Smoke is a deconstruction of Lahore’s class disparity, and in that it manages to be an ode to the history of the city. He takes you through the famous Mall Road and the Ravi Bridge, and what has become of them now. Hamid disassembles all that is Lahore through a story of a marriage in trouble, fraught friendships and a protagonist on the brink of oblivion. All the while the heat threatens to creep up on you through the pages.

City of Sin and Splendour: Writings on Lahore by Bapsi Sidhwa is another one that I cannot recommend enough. I hold this anthology close to my heart for it captures the essence and history of what makes Lahore. With her own writing drawing inspiration from Lahore, Sidhwa, has managed to gather all forms of writings, including excerpts from books, narrative nonfiction, and poetry, that represent what Lahore means to her and so many others, including me.

Lahore was the first place I fell in love with books. Having lived in UAE my whole life, books were few and expensive. My visits to Lahore were when I filled up my bags with books, scavenging the shops for the latest releases and old favorites. I hope I am able to visit again one day and celebrate how far along in my appreciation of books I have come, all thanks to this beautiful city.