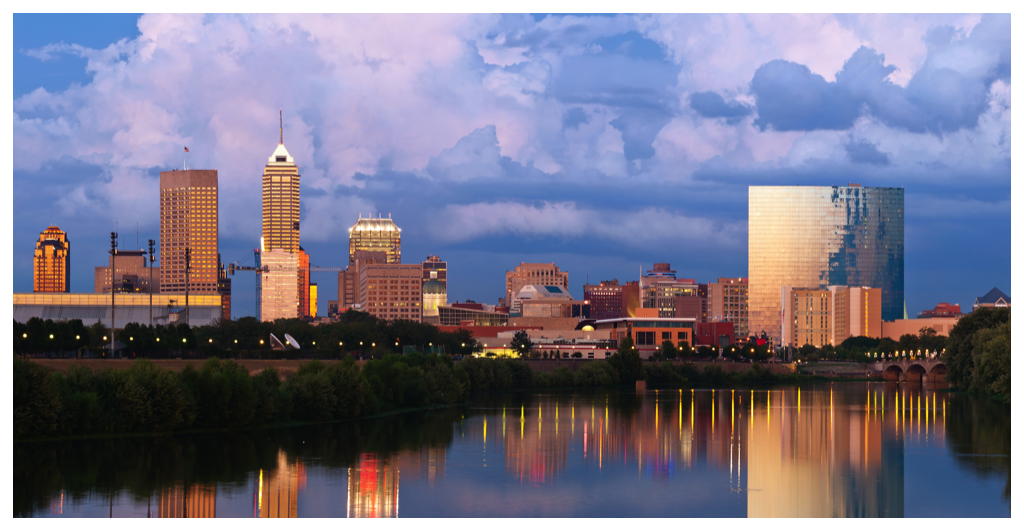 Indiana, best known for its corn fields and the Indy 500, doesn’t scream “literary tourism” at first glance. But don’t doubt it for a second – the capital of Indiana, the aptly-named Indianapolis, has plenty of bookish places to keep literature fans entertained on their trip to the city.

One of the most beloved authors in American literature, Kurt Vonnegut, was born and raised in Indianapolis. It’s only fitting, then, to stop by the Kurt Vonnegut Memorial Library and have a look around. This library and museum champions the “principles of free expression, common decency, and peaceful coexistence” Vonnegut advocated throughout his life. Visiting is free, and they’ll pretty much give a tour to whoever shows up. The library has super cool Vonnegut artifacts, with everything from Vonnegut’s typewriter to his Purple Heart to a pack of his cigarettes found behind his bookshelves, and their exhibits rotate on a fairly regular basis. The library also holds a concert series as well as activities for VonnegutFest and Banned Books Week if you’re lucky enough to drop by in the fall. Visit their website before you go to get their current address, though, as they’re hoping to relocate to a larger space down on Mass Ave within the next few years – and be aware that they’re closed on Wednesdays.

chilling at the kurt vonnegut memorial library in indy

Another famous writer Indianapolis is known for is the renowned turn-of-the-century poet James Whitcomb Riley. Within a few blocks of the Vonnegut Memorial Library you can visit the James Whitcomb Riley Museum Home, in the historic cobblestone Lockerbie Square. Open Tuesday through Saturday, this house is the only late-Victorian preservation open to the public in Indiana. For just $4, you can tour the home where James Whitcomb Riley spent the last 23 years of his life. The guides know absolutely everything you could ever want to know about Riley, his contemporaries, and his poetry, and you’ll get to see the workings and original furnishings of an early 20th century American house. James Whitcomb Riley was known as “the Hoosier Poet,” and you don’t want to miss seeing where he crafted some of his most famous verses.

Within walking distance of both of the previous locations is my absolute favorite Indianapolis hangout, Indy Reads Books. Just off the Cultural Trail on Mass Ave, in the heart of the arts district of downtown Indy, this used bookstore has everything you could ever dream of finding, from work by local authors to handmade zines to recent bestsellers. Plus, the aesthetic of this bookstore always makes me swoon, with its beautiful hand-lettered signage and its front desk built from books. The store is non-profit, as an added bonus; all proceeds from book sales go straight to Indy Reads, an organization dedicated to improving adult literacy in Indianapolis. By buying books from Indy Reads Books, you can help them reach their goal to “Make Indianapolis 100% Literate.” Indy Reads Books is also host to a whole cast of events, everything from Chess Club to theatre improv performances to creative writing group meetings welcome to anyone and everyone.

While those are the three main literary attractions downtown, other bookish places are scattered throughout the city and its suburbs as well. Bookmamas, over in the Irvington district, is a great place to pick up used books of all sorts, though their children’s collection is particularly impressive. They also share space with Irvington Vinyl, an extra bonus for record-lovers. The newly-opened Porter Books & Bread, a cozy used bookstore/cafe with a definitive hipster vibe, was also a delight to visit. Out near Fort Harrison State Park, this cafe gives you a place to grab both a book and a bite to eat, the menu full of lovely sandwich options such as the Poe or the Austen.

And of course, there’s the famous Books & Brews, an establishment already reviewed by a previous Rioter. So hop to it, and get exploring!