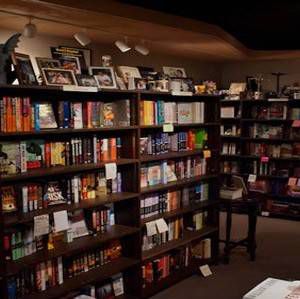 I was sitting in the audience at an event for the paperback release of Justin Cronin’s The Passage when he talked about the book’s connection to Houston. Since we were sitting in a Houston bookstore for the event, this was of particular interest to the people in the room. He started by telling us that the beginning of the end of the world takes place at the 610 underpass, just a block from the Galleria, Houston’s shopping mecca. None of us were surprised by that. It made sense.

That might not sound like a ringing endorsement for visiting our fair city, but it’s one of those things that make the city unique.  It has been the setting for books, movies, movies based on books, and movies with a very bookish vibe. Terms of Endearment, based on the Larry McMurtry novel by the same name, was filmed here. The mansion that was used for the playboy astronaut character played by Jack Nicholson was on the market as recently as last month.

But let’s get back to that bookstore I was talking about.  The store that played host to Justin Cronin on that summer evening was Murder by the Book, a mystery bookstore that has been a part of the Houston scene for more than 30 years.

Immediately across the street is one of Houston’s many bookish bars, Under the Volcano. There’s even a shrine to the novel by Malcolm Lowry from which it takes its name.  They serve a mean frozen screwdriver, and it is perhaps my favorite place to meet up for a post-book signing drink. A close second would be Mongoose Versus Cobra in Midtown, named for Rudyard Kipling’s “Riki Tiki Tavi.” There is poetry on the wall, and a unique collection of taxidermy, including a tense scene between the two creatures that lend the bar its name.

About a block down from Murder by the Book and Under the Volcano, you’ll find Brazos Bookstore. It’s the perfect addition to what has to be the most bookish couple of blocks in the city. This year marks their 40th anniversary. You might think it odd that two bookstores have existed practically side-by-side for so long. I don’t know what the past was like, but I do know that now the two stores work in harmony. They complement each other.  It’s a beautiful thing to see.

Consider this stretch of Bissonnet to be the center of Houston’s book scene. A few blocks down the road, you’ll find The Raven Grill, which I have on good authority was named to complement Edgar Allan Poe Elementary a few blocks away.  Go back the bookstores and start driving in the other direction, you’ll find a neighborhood where the streets are named for writers, including Marlowe, Coleridge, and Tennyson. Start heading north, and you can grab lunch at The Hobbit Cafe. It’s a personal favorite.

Houston is an excellent city for meeting authors and hearing them talk about their work. The Inprint! Margaret Root Brown Reading Series has brought amazing authors to the city, like Margaret Atwood, Salman Rushdie, and Khaled Hosseini.  Brazos has played host to Amy Tan and Junot Diaz in recent months. Across town, Blue Willow Bookshop plays host to a fair amount of celebrity authors, like Chelsea Handler and Chris Colfer, and favorites like Sue Monk Kidd. They also host the Teen Book Con and work to bring young adult and children’s authors into schools in the Houston area. Houston is also home to the Indie Book Fest, the National Black Book Festival, and the Hispanic Book Festival.

If you find yourself in Houston, and you’re looking for an excuse to talk books, reach out to me on Twitter. I’m always up for browsing bookshelves or having a drink in one of my favorite bookish bars. I volunteer my services as tour guide.