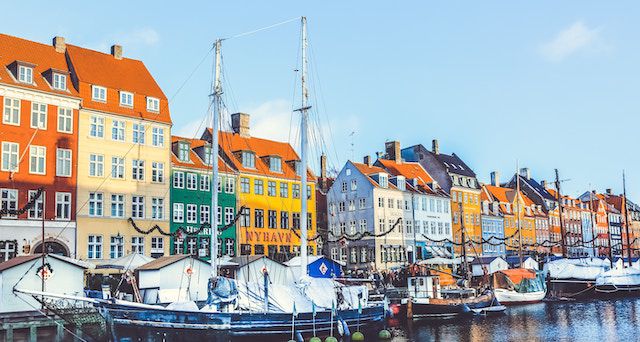 Ahh, Copenhagen. The Nordic city of bicycles, palaces, and fairy tales. As someone who likes to indulge in literary tourist trips from time to time, I was excited to see what literary secrets Denmark’s capital holds for book lovers, and I was not disappointed. In addition to some of the more well known places to see like the Glyptotek, Nyhavn (pronounced “new hound” with a muted D. You’re welcome.), or the Viking Ship Museum in Roskilde, there are some wondrous literary destinations in Copenhagen and the surrounding areas, particularly so if you have a deep love for fairy tales and Shakespeare. 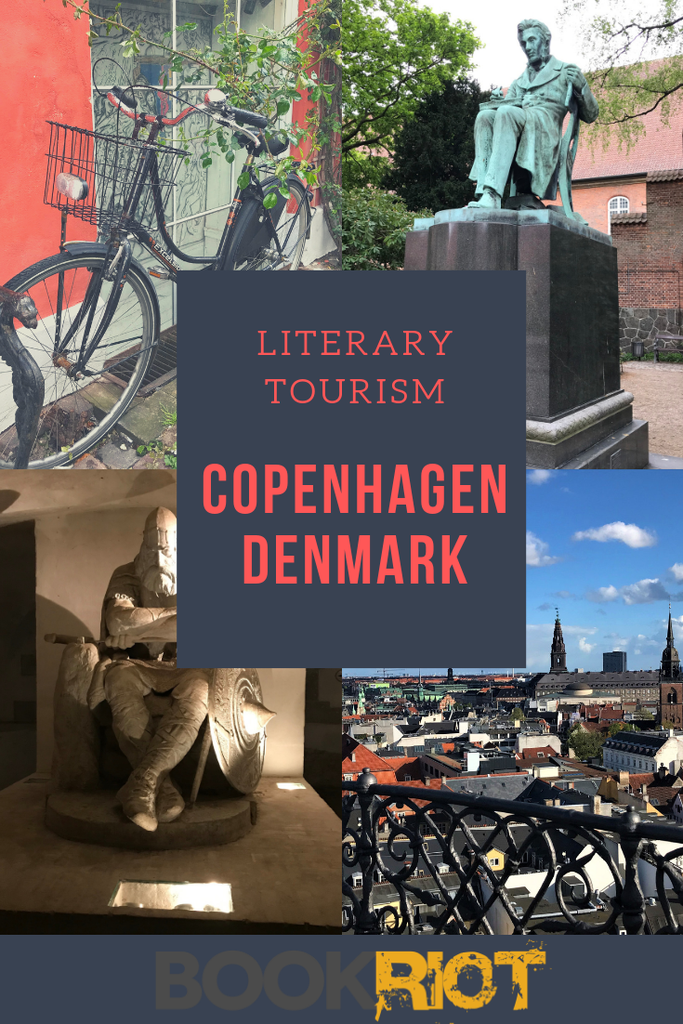 Church Of Our Savior 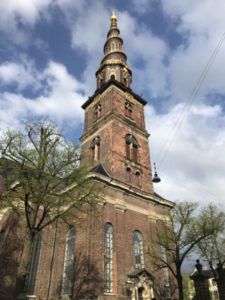 We’ll start to the east of Copenhagen’s downtown locations. This hella cool Baroque church is located in the Christianshavn neighborhood, easily accessible by bus from the city’s central train station. It was featured in Jules Verne’s Journey to the Centre of the Earth: main character Axel has to climb the corkscrew spire for five days straight to cure him of his fear of heights before going into the volcano (that would do it). Maybe only climb this once, because it’s 400 steps, and yes, the last chunk of that journey is outside until you’re at the top of the spire. The view? Unparalleled.

Head north of downtown to visit the world’s favorite mermaid. Hop on the train and get off at Østerport, then either take a bus or walk toward the Langelinie promenade. Although she is blink-and-you’ll-miss her small, she is still a lovely, wistful little mermaid, and worth the trip. When I took a canal boat tour, the guide informed us that the Little Mermaid used to face out toward the sea instead of toward the promenade, and that fishermen and sailors would wave goodbye and hello to her as they sailed past, as if she was their good luck charm that would protect them out at sea. She now faces the promenade so tourists can see her better.

Fun fact: Edvard Eriksen sculpted her in the early 1910s, and he’s also responsible for a trio of incredible statues that are housed in the Roskilde Cathedral he finished just a year before the commission to create the Little Mermaid. These statues surround the sarcophagus of Christian IX and Queen Louise, and are allegorical for grief, memory, and love. Eline Eriksen, his wife, was the model for all four statues.

West of downtown Copenhagen, accessible via bus, lies a massive cemetery where quite a few famous Danes are buried. Søren Kierkegaard and Hans Christian Andersen are both buried here.

Now we get to the heart of Copenhagen, where museums and restaurants and palaces are stepping on each other’s shoes for how close they are to one another. Not far from City Hall, you’ll find a cute museum of sorts dedicated to Denmark’s most famous writer, the 19th century father of fairy tales Hans Christian Andersen. The museum is accessible through a Ripley’s Believe It Or Not; you’re given a gold coin to enter H.C. Andersen’s exhibit. Andersen’s wing walks you through the story of his life, and then meanders across his most famous fairy tales with recreations of scenes for you to view, like walking through a popup book with chapters on Thumbelina, The Steadfast Tin Soldier, The Emperor’s New Clothes, and more. It’s geared more towards children, but it’s still a fun and interesting detour through Andersen’s life and work. 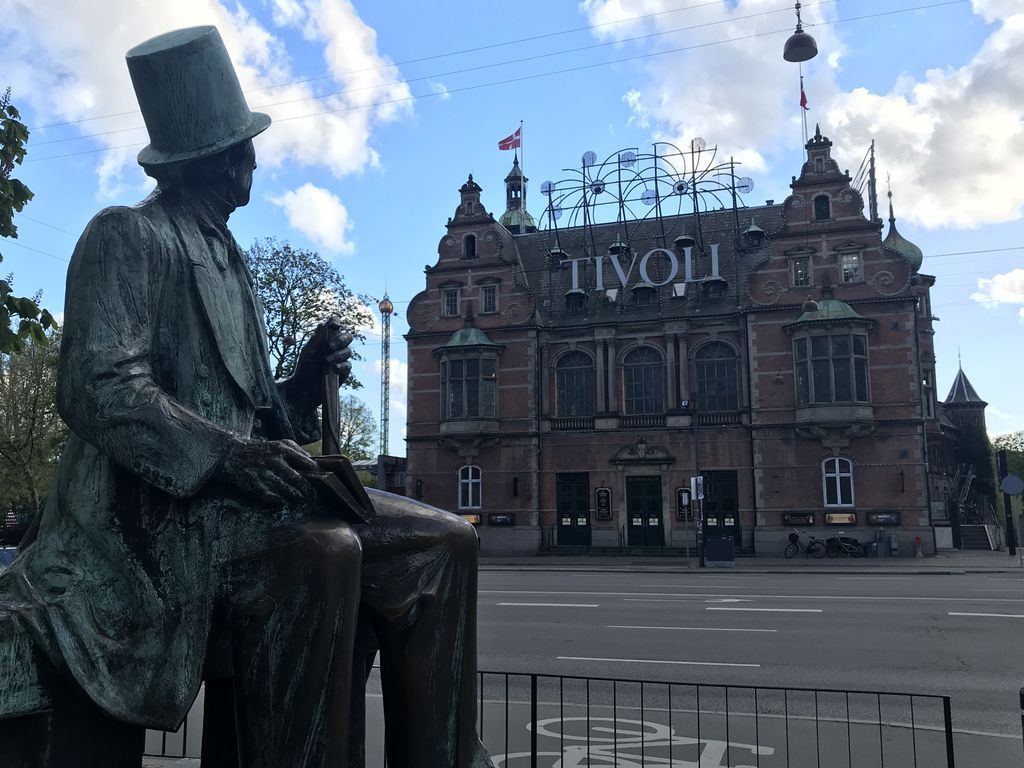 After you leave his museum, walk across City Hall to check out H.C. Andersen’s monument. He sits facing Tivoli, the world’s second oldest amusement park, nestled in the heart of Copenhagen (also worth a visit). It’s a sweet tribute to the writer of fairy tales, and an appropriate placement.

The famous Danish philosopher’s monument is hidden in a serene park behind the Danish Jewish Museum and the Royal Danish library. He faces a small pond and stares out at the water, book in hand. Take a page out of his book and enjoy the serenity of this secluded park before walking across the street to check out Copenhagen’s coolest library. 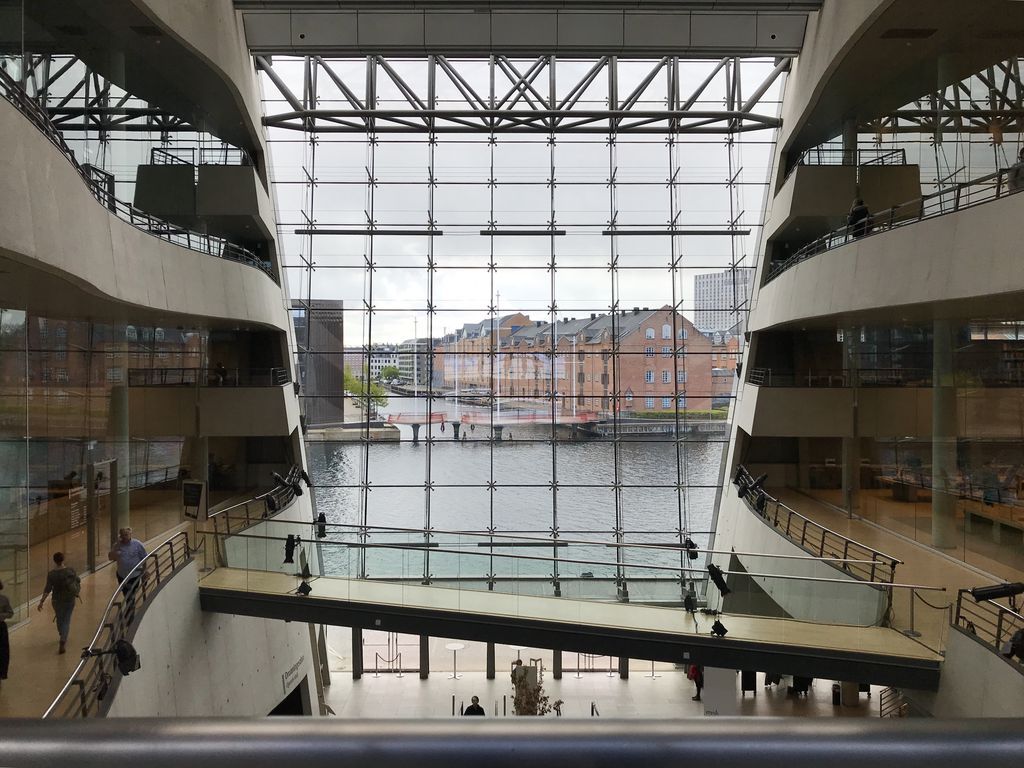 Otherwise known as “The Black Diamond,” this gorgeous modern library truly looks like a giant black diamond on the outside, and defies your expectations as soon you walk in. The new building is attached to the much older part of the library, so you can have the best of both worlds as you’re wandering this massive work of art, from the ultra modern to the antiquated. Do visit the little gift shop on the main floor for some lovely postcards, special book editions, and delicious fairy tale-themed sweet treats.

This bookstore has been open since 1915, and is associated with the Danish newspaper Politiken. You’ll find both Danish and English editions of books here.

Looking for rare and secondhand books? Head to Vangsgaards Antikvariat, the largest antique bookstore in Denmark. This gem is close by Strøget, a long, winding pedestrian street full of shopping and tasty food. 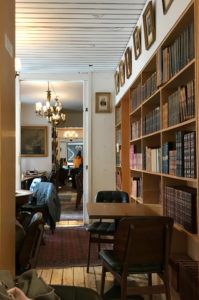 This bookstore restaurant is right in the middle of everything, and once inside, you’re surrounded by floor-t0-ceiling bookshelves jammed full of books, charming tables nestled in every corner, and a patchwork of narrow rooms bustling with people and more books. Grab any available table you can first, then go order something delicious at the counter to have it brought back to you. It’s a cozy library-esque respite for when you want to rest your feet and tuck into a meal. 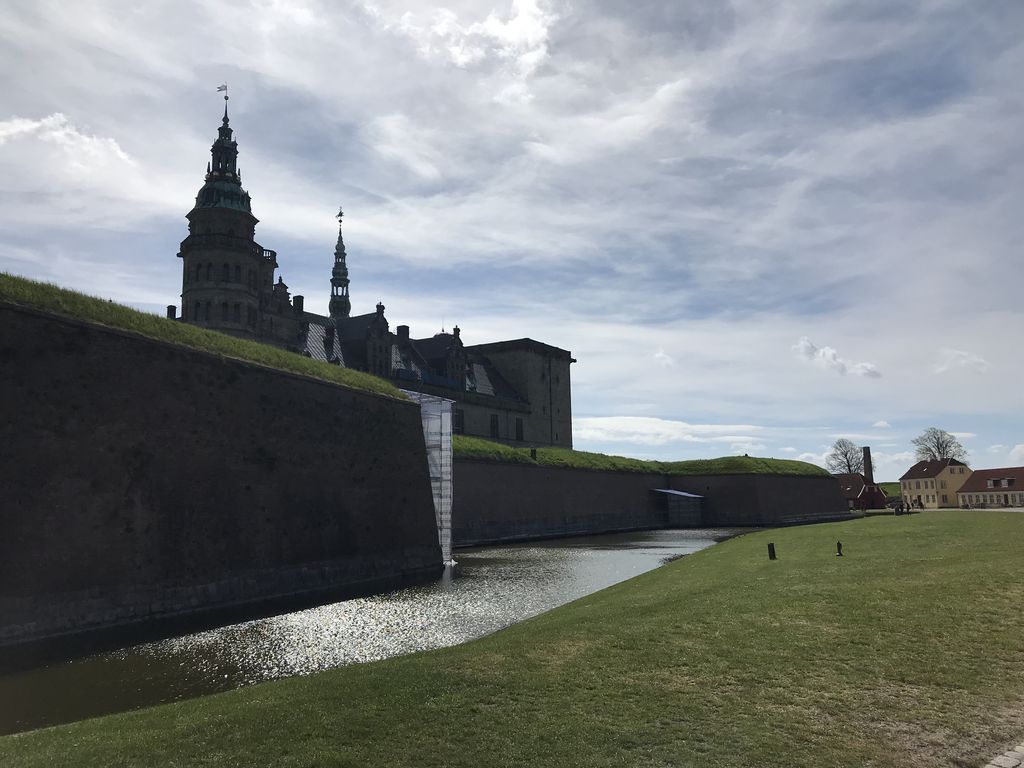 If you hop on a regional train heading north, you’ll find yourself in the seaside town of Helsingør in less than 45 minutes. A pleasant walk through town will take you up to Hamlet’s castle.

For real, though. That castle right up there? That was Shakespeare’s inspiration for Elsinore in Hamlet. The real thing is called Kronborg Castle (“Crown Castle”). It was built in the 1420s as a fortress and renovated during Shakespeare’s lifetime by Danish King Frederick II to upgrade its military prowess and befit it with chambers fit for a king and a queen to reside there.

Shakespeare never saw Kronborg in person, but he no doubt heard about the famous castle, since plays were routinely performed there. Maybe even from the real Rosencrantz and Guildenstern, Frederik Rosenkrantz and Knud Gyldenstierne; two Danish noblemen who visited the English court in the 1590s. Kronborg is a UNESCO World Heritage site, and if you visit during the summer, you can interact with the cast of Hamlet as they move through the castle grounds.

Bonus: Visit Ogier the Dane while you’re there, who sleeps in the casements underneath the castle. Ogier made appearances in old epic poems and Danish folklore, and it is said that he will awaken if Denmark is ever in peril in order to defend her.

If you feel like venturing out of the Copenhagen metropolitan area, a train can take you to the little town of Odense, Denmark, in just under two hours. Odense was the birthplace of Hans Christian Andersen. In addition to visiting the Hans Christian Andersen museum, which focuses on his work and his paper art, you can visit his actual childhood home.

Got time to spare? Drive or take a bus down to Egeskov Castle, a 16th century Renaissance castle surrounded by a moat that will make you feel like you’ve walked right into a Disney movie.