Concord, Massachusetts, is a town about 20 miles west of Boston and founded in 1635. Concord first gained recognition as being the site where the “shot heard round the world” was fired on April 18, 1775, when the British troops stormed out of Boston and into Concord in search of hidden weapons. After a clash with the British in nearby Lexington, the Concord minutemen stopped the British at the North Bridge and the American Revolution was begun. The entire scene was memorialized in Henry Wadsworth Longfellow’s classic poem, “The Midnight Ride of Paul Revere,” but this was not the sole defining moment for Concord. That would come in the next century—when Concord became a magnet for the writers that created the first masterpieces of American literature.

Today, Concord remains a stately and beautiful town that still has the white spires of the church towers rising above Concord’s ancient elms, maple, and oak trees. The commuter rail makes Concord more of a commuter town than a literary hub of genius—but the names of Thoreau, Emerson, and Alcott still dominate. Many of the Concord street names and town businesses are named after Emerson, Alcott, and Thoreau (an antique store named Thoreauly Antiques being one of my favorites). And, if you travel slightly on the outskirts of town, and sit in the fields on a warm day not too far from the Concord River—it is easy to imagine Thoreau rowing his canoe with a teenage Louisa May Alcott sitting behind him while he’s talking about the natural world.

The all-night discussions and writings of Emerson, Hawthorne, Thoreau, Bronson and Louisa May Alcott, and writer Margaret Fuller (who had enraptured both Emerson and Hawthorne with her intelligence and beauty) became the cornerstones of Transcendentalism: the school of philosophy that emphasizes the natural world. After decades of being fed the dour strictures of the Puritan founders, placing an obedience to God above all  and the shutting down of any independent thought, a wave of liberalism rose in response.  It was the individual, and their relation to the natural world and their community, that was discussed and debated.

Emerson was the community organizer of these writers and philosophers. The tenets of modern day feminism and the environment began in Concord.

Emerson was raised in Boston but much preferred Concord for its small town village feel. Emerson was certain Concord was far more conducive to significant and original thought—the distance from Cambridge and Boston kept the Concord transcendentalists away from the restrictions and repressions of the established (and close minded) intellectuals.

Emerson and Thoreau placed their principles into action with their participation in the Underground Railroad, assisting in the transportation of slaves from the south to safety in the north. These Concord writers advocated for the Abolitionist cause and were particularly distraught over the capture and execution of John Brown at Harper’s Ferry. The wealthier Concord residents had given money to John Brown for his raid on Harper’s Ferry, convinced that Brown’s cause was above the law.

After the disastrous failure of Brown’s raid on the federal armory at Harper’s Ferry and leading up to his execution on December 2, 1859, Thoreau, Alcott, and Emerson strongly advocated for Brown’s release. On the day Brown was executed, the bells of Concord rang out.

Visitors to Concord can visit the homes of Alcott and Emerson and Hawthorne. Thoreau’s home is at Concord’s Walden Pond, the place where Thoreau went to live deliberately and away from the materialism of the manmade world. 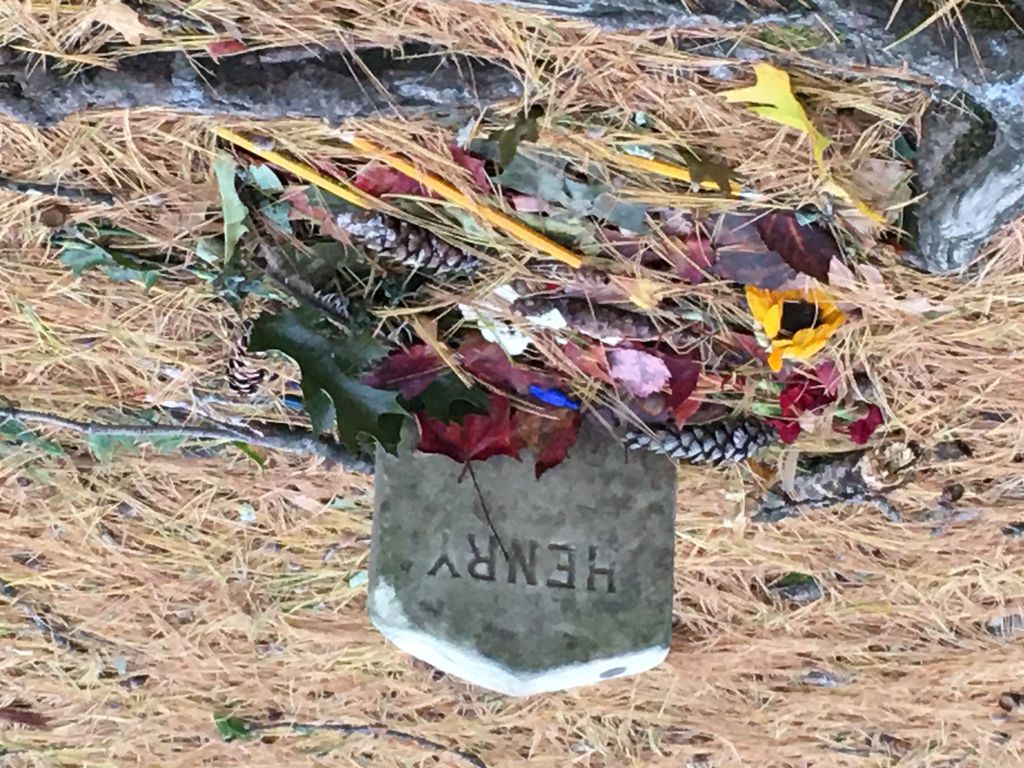 When you go to Concord, a trip to Walden Pond is a necessity. Also, check out Orchard House, where Louisa May Alcott penned Little Women in a tiny upstairs bedroom. The Old Manse, owned by Emerson and occupied by Nathaniel Hawthorne, has magnificent gardens which were designed by Thoreau as a wedding gift to Hawthorne and his wife Sophia Peabody. Emerson’s house is open for visitors, and the Concord Museum has a replica of Emerson’s living room and most of the relics of Thoreau’s Walden Pond experiment.

There is also Sleepy Hollow Cemetery, the final resting place of Emerson, Thoreau, Hawthorne, and the Alcotts. On a cool autumnal late afternoon, I went to Sleepy Hollow and was glad to see that the graves of these tremendous thinkers were all fairly close to one another. A good way to keep the conversation going.