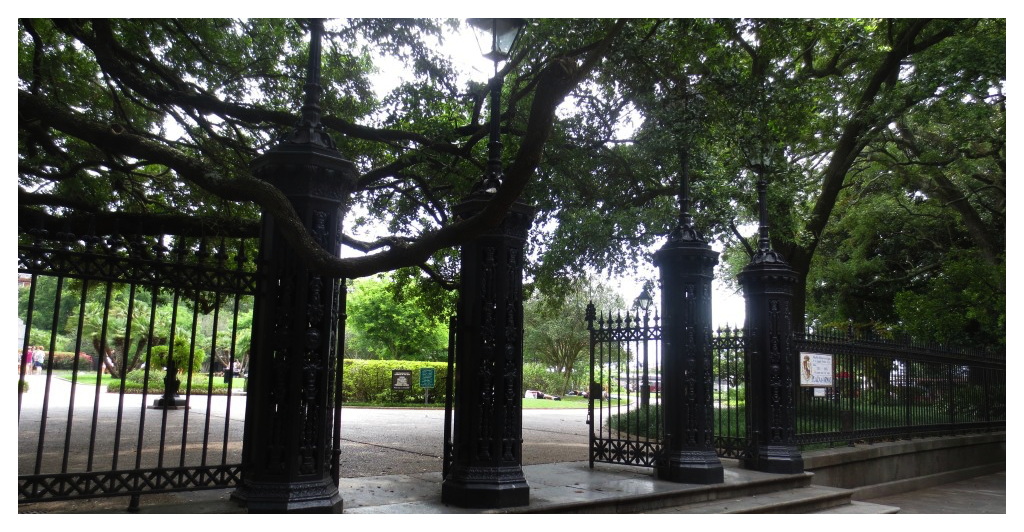 New Orleans is absolutely drenched in old literary history, and over the summer, I was lucky enough to visit for a few days with a friend of mine and get a taste of this history for myself. A few years ago, Cassandra Neace highlighted her favorite bookish spots and book stores around the city, but if you’re itching for more literary awesomeness, check out some of these historical locations: 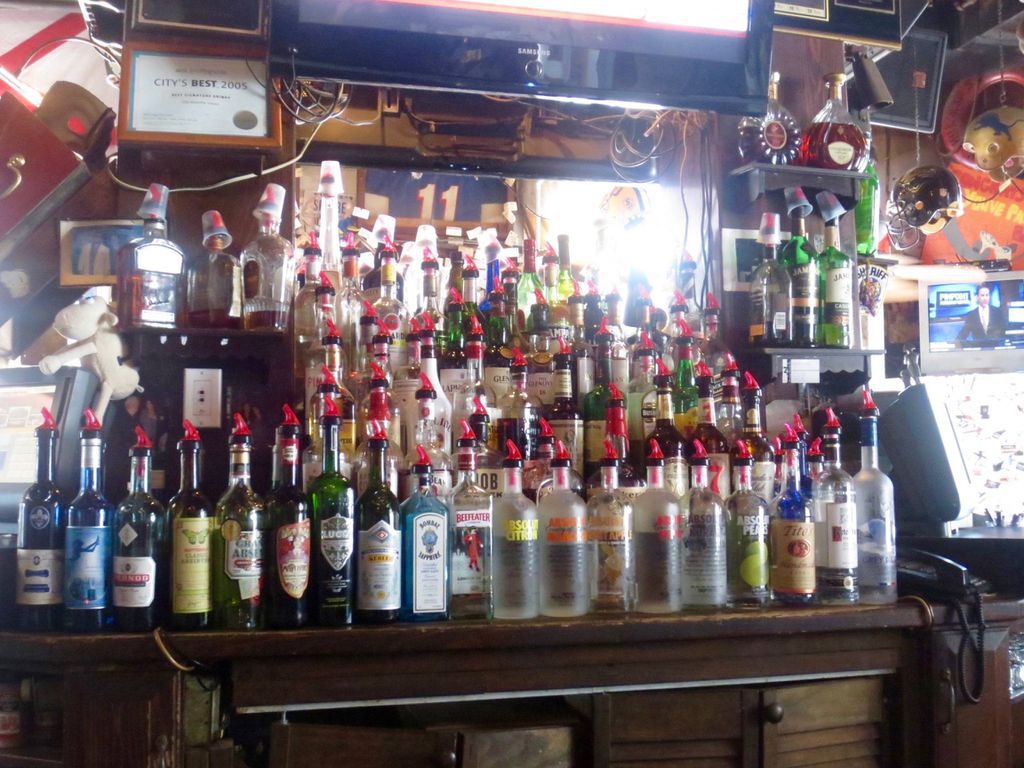 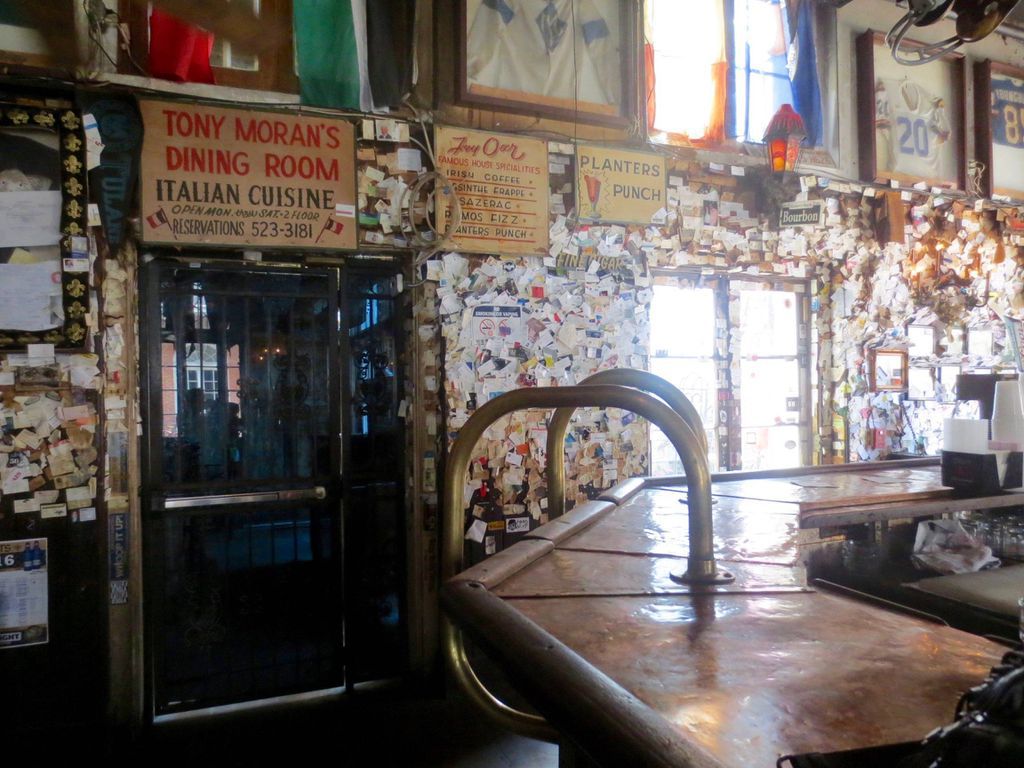 On our first full day in New Orleans, my friend and I wandered around the French Quarter and decided that 3:30 on a Monday afternoon was the perfect time to get tipsy. We stopped in the Old Absinthe House on Bourbon Street, which was a favorite haunt for authors like Mark Twain and Oscar Wilde, and which also served as the legendary secret meeting place between Andrew Jackson and the pirate Jean Lafitte as they planned the military strategy for the Battle of New Orleans. The bar top is actually the original bar from the early 1800’s, and if you look past the football memorabilia hanging from the ceiling, it’s easy to imagine Mark Twain sitting at the bar with that spectacular mustache and a glass of absinthe in hand.

We also ventured up to the second and third floors, which are fully functioning restaurants in the evenings, but were still closed when we got there. On the third floor, we bumped into one of the head chefs (“Just call me Chef Q”), who thankfully did not scold us for wandering around the empty restaurant, but instead gave us an impromptu mini tour and shared a few of his favorite ghost stories from working there. So for those of you keeping score at home, the Old Absinthe House is literary AND haunted! Bonus points!

The Carousel Bar & Lounge is exactly what its name implies: a bar set around a rotating merry-go-round. The bar/lounge is located inside the famous Hotel Monteleone, which has seen its fair share of literary guests, including Ernest Hemingway, William Faulkner, John Grisham, and Anne Rice. Truman Capote was also a frequent guest of both the hotel and the Carousel Bar, and he (erroneously) claimed that he had actually been born in the hotel itself.

The hotel was designated as an official literary landmark by the Friends of the Library Association, one of only three hotels in the country to receive that distinction. And although we didn’t stay in the hotel itself, you can tell it’s well worth a visit. It’s also one of the city’s most well-known haunted locations. (That’s two haunted places on this list, if you’re keeping track, and yes, I totally plan to spend a night there one day.)

The Cats of Jackson Square 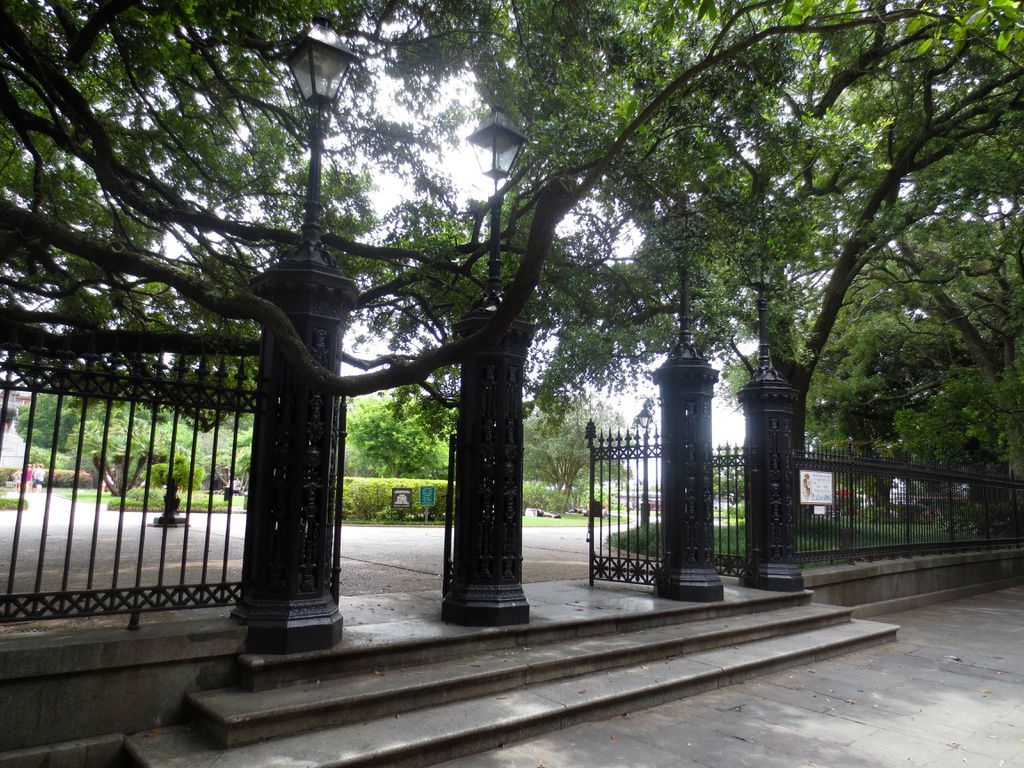 By day, Jackson Square and the Place d’Armes is a popular shopping and entertainment attraction in the heart of the French Quarter.  But by night, it’s overrun with dozens of stray cats that congregate behind the iron bars in the square. Seriously. It’s like a kitty convention center. Italian writer Italo Calvino described the feline occupants of Jackson Square in his story, “The Garden of Stubborn Cats,” saying “there were striped cats, black cats, white cats, spotted cats, tabbies, angoras, persians, family cats and stray cats, perfumed cats and stinky cats. Marcovaldo understood that he finally reached the heart of the kingdom of cats, their secret island.”

Sadly, I did not see any cats when we walked by, but if you read the comments from other nighttime tourists, it sounds like the cats really do make frequent appearances in the square. I’ll just have to plan another visit and wait for the kitties to come out.

When I first signed up to write this article, my first thought was “I totally have to stalk Anne Rice’s house.” I’ve only read the first two books in the Vampire Chronicles, but to me, Anne Rice is the living embodiment of New Orleans. Her house even made its way into The Witching Hour, the first book in the Mayfair Witches trilogy – address and all!

Anne Rice doesn’t live in the house anymore, so to the average pedestrian, it just looks like another stately historic home in the Garden District, save for a bronze plaque on the front gate with her name. There aren’t any tours inside the house, so I only got to look at it from behind the iron fence. But with the gorgeous columns and massive moss-covered trees in the front yard, I almost felt like I could see Lestat peering out from one of the second story windows. And the fact that she doesn’t live there anymore made me feel less guilty about fan-girling in full view of the street with my mouth agape.

Just a few blocks away from the Rice house is Lafayette Cemetery No. 1, one of New Orleans’ most famous above-ground cemeteries. And not surprisingly, the cemetery has ties to Anne Rice. She supposedly used one of its most famous tombs, the Jefferson Fire Company #22 tomb, as inspiration for the tomb of the Mayfair Witches, and one of the cast iron tombs was apparently used to create Lestat’s tomb in the film version of Interview With the Vampire. Anne Rice even staged her own mock funeral in the Lafayette Cemetery to promote the release of her novel, Memnoch the Devil.

When I actually visited the cemetery, it started to pour the moment my friend and I stepped out of the car, so we knew our visit was going to be cut short. The cemetery is absolutely huge – about the size of a square city block – and we could easily have spent hours exploring the pathways and marveling at the creepy history in front of us, but it started to storm in earnest and we hightailed it back to the car in a hurry lest we be turned into human lightning rods.

There is so much literary history to appreciate in this city, and I know I haven’t even begun to scratch the surface of what New Orleans has to offer. All this means, though, is that I have to start planning my next visit ASAP, and this time, I’ll make sure to carve out enough time to wait for the kitties in Jackson Square.

So tell me, NOLA visitors – what other bookish places need to be explored?