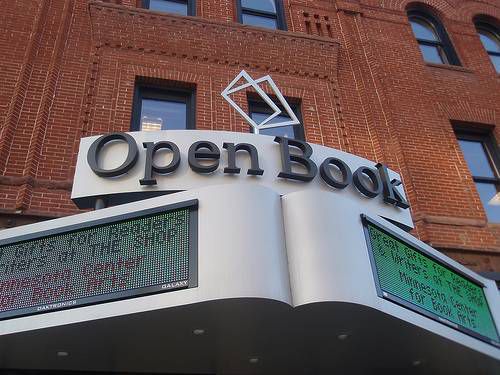 Despite the fact that Minneapolis was ranked the third most literate city in 2013 and 2014, the Twin Cities area is, I think, perennial underrated as a great literary destination. The Twin Cities is home to several small presses, a strong literary community and a plethora of great independent bookstores. Minneapolis and St. Paul are also the birthplace of many famous authors including F. Scott Fitzgerald, Charlie Baxter, Anne Tyler, David Carr, Vince Flynn, Thomas Friedman and Garrison Keillor.

One piece of advice before we get into the attractions: Make sure you come to Minnesota in the spring, summer or fall… winters in this state are not for the faint of heart.

In 2000, Milkweed Editions partnered with The Loft Literary Center and the Minnesota Center for Book Arts to open Open Book, a combination art gallery/coffee shop/museum/classroom/meeting space that houses all three entities and supports the arts and the downtown neighborhood. It’s a beautiful space that hosts all sorts of literary events.

If history is more your thing, the Minnesota Historical Society offers F. Scott Fitzgerald walking tours around the neighborhood where he grew up (save that one for warm weather). If you venture outside the Twin Cities, you can also visit the Laura Ingalls Wilder Museum in Walnut Grove (3 hours away) or Maud Hart Lovelace’s house in Mankato (1.5 hours away).

If you like to visit beautiful libraries, the Minneapolis Central Library is worth a visit. The library building underwent a renovation in 2006 and has a bunch of cool features – a 8,140 square foot atrium that connects the two library buildings and a “green” roof. The library was also built with nearly all recycled materials. With 2.4 million items, the library has the third largest per capita library collection of any major city. And it boasts the largest collection of children’s books in the upper Midwest.

The best place to find out what is going on in the literary Twin Cities is to visit the Twin Cities Literary Calendar from Rain Taxi. It is chock full of awesome events.

If you like books and you like to drink, you can also make time to attend Books & Bars, an open public book club show that meets the first three Tuesdays of the month at various bars in the Twin Cities area. The book club, which has been around for nine years, has evolved to discuss one book per month, a variety of literary fiction with a smattering of young adult selections. You can also follow @booksandbars discussions on Twitter with the hashtag #booksandbars. I’ve never attended, but man does this look fun.

If you are around in October, another awesome event is the Twin Cities Book Festival. This one day event – next scheduled for October 11, 2014 – brings together authors, readers, writers and booksellers for the biggest book festival in the Midwest. The festival is held at the Minnesota State Fairgrounds and is a ton of fun, featuring readings and panels and a great book fair with local stores and publishers. The festival also has a really fun kids venue with music and games for little readers.

Talking Volumes is a literary collaboration between Minnesota Public Radio and the Star Tribune that brings authors to the Twin Cities for a live interview at the Fitzgerald Theater that is later broadcast on MPR. In fall 2013, Talking Volumes hosted authors Edwidge Danticat, Margaret Atwood, Rick Riordan, Pat Conroy and Michael Connelly. Tickets to each taping are a reasonable $25 ($23 if you’re a member of MPR).

The Twin Cities is home to an amazing number of independent and used bookstores. If I tried to do a comprehensive list, I know that I would miss a bunch, so instead I’ll just share three that might be of particular interest to literary tourists.

Magers & Quinn Booksellers is what I always imagine when I think of a great independent bookstore. It’s got a ton of good choices arranged idiosyncratically to encourage browsing and taking your time. It’s fun to just wander around and see what you can find.

Birchbark is a tiny look bookstore owned by author Louise Erdrich. As you might expect, it has a big selection of books by American Indian writers across genres, as well as a range of other carefully curated choices.

Common Good Books is owned by another Minnesota author, Garrison Keillor. It’s another store that just fun to browse around, featuring a selection of gems from local authors.

So there you have it, a very brief look at some of the literary wonders of the Twin Cities! What are some of the places I inevitably missed?