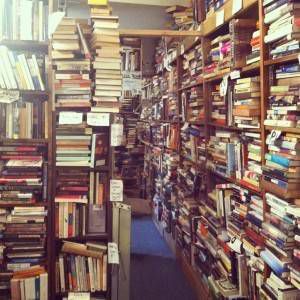 Most people, when they think of Washington, DC, they think of politics. Capitol Hill, lobbyists, politicians, scandal, Kevin Spacey, cherry blossoms if we’re lucky. But DC has a rich literary tradition and wonderful hidden gems among the most well-known spots. After having lived in Washington for almost nine years, I’m much more a fan of the bookish sights than the political ones. Let’s explore by neighborhood, shall we?

This is where most visitors to the city spend the bulk of their time. The Mall is surrounded by the ultimate destination for museums in the country: the Smithsonian complex. As great as this collection of museums is, the bookish delights are scattered among the rest of the collections (the Little Golden Books at the American History Museum were my favorite exhibit until it closed in Jan. ’13). If you’re planning a visit, it’s best to check out The Smithsonian’s current exhibits to see if anything catches your interest.

Beyond the Smithsonians, my favorite museum in DC is the Newseum, which – while focused on the role of journalism in crafting history – also has a great literary bent. The front of the building features the First Amendment, and the First Amendment gallery highlights some books that have been banned or challenged. In addition, the Great Books gallery highlights those books and documents that had the greatest impact on freedom.

From there, it only makes sense to head up the Hill and take a tour of the Library of Congress. Rioter Becky did a fantastic roundup of this unforgettable, must-see building. Take a tour at the very least, and see some of the most amazing and rare books on display. The LoC is also home to the Center for the Book and the Poetry and Literature Center, which both host events like author discussions, Poet Laureate readings, symposia, educational events and much more.

The LoC also is responsible for hosting the Poetry 180 program for high schoolers and every summer, it puts on the National Book Festival. In past years, the festival has been held on the Mall, but the organizers have just announced that, for 2014, it will instead be held at the Walter E. Washington Convention Center, allowing them to feature a film series highlighting books that have been adapted into movies.

Another library worth visiting a few blocks from the Mall is the main branch of the District of Columbia Public Library. The building is undergoing some major overhauls to improve its usable space, including the recent unveiling of the Digital Commons, featuring, among other things, a 3-D printer and an Espresso book machine. Some of the smaller branches are worth visiting too.

Take a short detour off the main tourist thoroughfare to the Eastern Market neighborhood for the most amazing used bookstore you’ll stumble across. Capitol Hill Books is an adventure unto itself. Prepare yourself to spend several hours exploring the precarious stacks and reading the owner’s notes scattered throughout the shelves.

Head back to the Mall, and jump on the Red Line to the most famous of DC bookstores……

Most bookworms are familiar with this DC institution as the home to an impressive lineup of author readings and events (350 a year!!). But P&P is essential to the Washington literary community for many more reasons. They host a series of college-level literature class, writing workshops, vacation packages that have a literary bent (recent destinations include Paris and Provence), book clubs, and educational events. They offer on-demand printing via Espresso Book Machine (aka Opus) and two book subscription programs, one for adults and one for kids.

Politics & Prose also hosts a number of events outside of their store, and one of their most popular venues to partner with is the Sixth and I Historic Synagogue, in the Chinatown neighborhood. Esther Safran Foer (yes, those Safran Foers) is the Executive Director and CEO, and the emphasis on strong literary events is particularly noticeable in their lineup as a result.

Speaking of amazing venues, the PEN/Faulkner Foundation hosts a reading series at the Folger Shakespeare Theater, that has featured incredible writers like Amy Tan, Tom Perrota and Richard Ford. And the annual PEN/Faulkner Fiction Award Ceremony & Dinner at Folger is guaranteed to feature a who’s who of amazing writers.

From P&P, take the Red Line back down to…

As you exit the metro on the Q St. side of the circle, notice the quote circling the granite wall above escalator entrance:

Thus in silence in dreams’ projections,
Returning, resuming, I thread my way through the hospitals;
The hurt and wounded I pacify with soothing hand,
I sit by the restless all the dark night — some are so young;
Some suffer so much — I recall the experience sweet and sad . . .

These lines come from the Walt Whitman poem, “The Dresser.” The poem was inspired by Whitman’s work comforting the wounded in Washington hospitals during the civil war. It might seem like a strange choice for public transportation, but in 2006 councilmember Jim Graham was looking for a way to recognize those caregivers during the AIDS/HIV crisis. The Dupont Circle neighborhood is known for having a large LGBT population and the similarities between Whitman’s poem and the struggle of those caregivers was fitting for its selection. In Dupont Circle, especially in nice weather, it is not at all unusual to find numerous readers scattered among the chess players surrounding the impressive fountain at the center.

But don’t stop there – there is a second poem engraved around the base of a bench just outside the metro entrance. That piece is from DC poet E. Ethelbert Miller’s work “We Embrace.”

Leaving the north entrance to the metro, head up Connecticut Ave. and find Kramerbooks & Afterwords Cafe. It’s a great place to browse, particularly for LGBT and local DC literature, with a good general selection for a small indie. Stop for dessert and coffee (or dinner too. Everything’s good.) on the outdoor terrace when the weather’s nice. And if you get a late night craving for the new Thomas Pynchon, they’re open 24 hours on Fridays and Saturdays.

If you haven’t quite gotten your fill of used books, also check out Second Story Books, which specializes in rare manuscripts, and Books for America, a non-profit whose proceeds go to funding literacy programs.

From Dupont Circle, stroll east on Q St. until you run into…

Turn left and walk north towards U St. While this booming avenue is quickly filling with new restaurants and boutiques, some of the long-time residents are decidedly book-focused. Next door to each other (and owned by the same guy) are Cafe Saint-Ex – named after Little Prince author and pilot Antoine de Saint-Exupery – and Bar PIlar – named after Ernest Hemingway’s boat and the female protagonist in For Whom the Bell Tolls. Bar Pilar, which is decidedly Hemingway themed, even has the authentic helm of the boat, Pilar, on display.

Farther up 14th St. you’ll come across DC institution, Busboys & Poets, named for Langston Hughes. Hughes worked as a busboy for a brief stint at the Wardman Park Hotel in DC, and scribbled poetry whenever he could. He passed a few of these poems to a famous poet of the age, who was dining at the restaurant, which is how Hughes was “discovered.”

Busboys & Poets is both an amazing restaurant/cafe and a bookstore, called Teaching for Change. The bookstore focuses on progressive and activist resources, as well as on a variety of diverse and local authors. The restaurant also hosts lots of local events, like open mics, signings, and book clubs.

Across the street is Creole/Southern food mecca, Eatonville, named for Zora Neale Hurston’s Florida hometown and the setting in her most famous novel, Their Eyes Were Watching God. Hurston was briefly a DC resident while she attended Howard University.

Now that you’ve gotten your fill of literary grub, hop in a cab for a few miscellaneous sights to see. First stop…

As you take a spin around the front of the building, check out the Don Quixote statue that was a gift from Spain on the occasion of America’s Bicentennial. An inscription on the front reads, “Well might the enchanters rob me of my good fortune, but never of my spirit or my will.”

If you time your visit right, you might be able to catch a performance by the Washington Ballet doing Peter Pan or the Washington National Opera’s presentation of Moby Dick.

From the Kennedy Center, head directly up 22nd St. to the campus of…

On the corner of 22nd and H St., check out the statue of Alexander Pushkin, a gift from Russia as part of a cultural exchange; a statue of Walt Whitman was similarly erected in Moscow. The statue is said to be the first commemoration of a Russian literary figure erected in the United States.

While you’re in town, don’t forget to check out the Frederick Douglass House in Anacostia. Oh and have I mentioned the local book festivals in Baltimore and Bethesda, or Fall for the Book that spans DC, VA, and MD over 5 days?

Obviously you could more than fill your days with just literary sights in the Capital City…or you could do what I do all too often, and spend your day hanging out on a blanket on the Mall with a good book under the watchful eyes of the Capitol building and the Washington Monument…