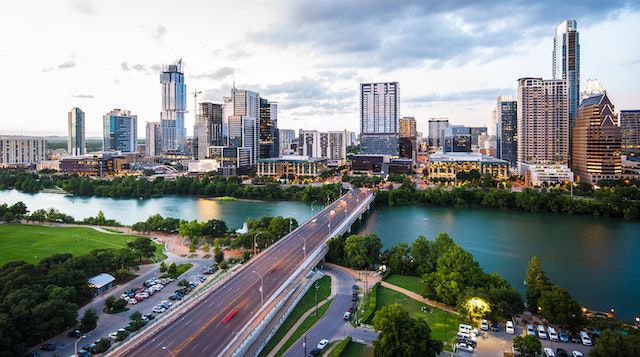 Maybe you think you know Austin. You’ve visited once or twice, attended SXSW or fought the crowds at ACL Fest. You know the bars of Sixth Street and Rainey, along with the ever-changing shops of South Congress. If you’re lucky, you’ve seen our 1.5 million Mexican free-tailed bats emerge from the Ann W. Richards Congress Avenue Bridge for their nightly feasting.

But did you know that Austin is also a book lover’s warm-weathered paradise? If not, allow me to introduce you to the bookish nooks and crannies of my city. Let’s take a tour, y’all.

A Local Bookstore for Every Taste

We’ve got our favorite holiday picks on display! Our yearly catalog collects our very favorite books of 2019, which we also have up on display all around the store. And check out the first look at our limited edition “make GREEN choices” coffee mug, which we’re offering as part of our fan-favorite gift-card bundle(swipe to see)! Stop in and enjoy something warm (or cold) from the café while you stroll the bookstore floor and find new literary treasures! 😉📖☕️ ————————————— #bookpeople #indiebookstore #shoplocal #favoritebooks #tbrpile #booksforeveryone #booksmakethebestgifts #coffeepeople #bookstorecafe

Austinites are fortunate to have one of the nation’s best independent bookstores in BookPeople, celebrating its 50th year in business in 2020. Well-lit and well-stocked with two floors of adult, YA, and children’s fiction and nonfiction, BookPeople is a must-see. While you’re there, you can pick up some bookish gifts, as well as a cup of joe or a breakfast taco from CoffeePeople. Keep an eye out for one of the store’s regular author events or take the indie magic with you by choosing one of BookPeople’s subscription boxes.

But don’t stop there. Austin has a host of other specialty indies to meet every reader’s need. Malvern Books specializes in literary fiction and poetry and does an excellent job highlighting authors from marginalized communities. Looking for something you’d never find at your usual bookstore? You’ll probably find it here.

Farther north, Balcones Books trades in used and rare books. If you’re looking for something specific, you can browse their collection online.

Lovers of comics and graphic novels have the pick of the litter, too, with Tribe Comics, Dragon’s Lair, and Austin Books & Comics.

And that’s just scratching the surface.

Why choose a bookstore when you could have them all? To celebrate National Independent Bookstore Day each April, the Austin Bookstore Crawl encourages you to visit partner bookstores around Austin for a scavenger hunt.

Each bookstore has a special task for Crawlers to complete. Crawlers post their photos at each store to social media for a shot at drool-worthy prize packages of books and merch.

So you get to spend an entire day in various bookstores, all for a shot at winning even more books. It’s a win-win situation.

Unfortunately, the Crawl is on hiatus this year. But mark your calendars and request your time off work for April 2021.

Austin’s “Library of the Future”

The glorious new Austin Central Library opened to the public in late 2017. Sitting pretty on Cesar Chavez Street, the six-story central library offers a perfect spot to take in the sights and sounds of Austin. That includes the greenery and scenery of Lady Bird Lake and its hiking and biking trails, which run through the heart of the city and can be seen from the library’s rooftop garden.

Good morning from the #centrallibrary! Come visit us, there’s lots going on in the entire library system. #morethanbooks

Outdoor reading porches let you bask in Austin’s 228 sunny days a year. Reservable meeting rooms and event spaces make for nice co-working zones. Works by local artists adorn the walls, and there’s a tech petting zoo for those who want to check out 3D printing or Internet of Things devices for the first time.

Before you leave, grab a cup of coffee and a bite to eat at the Cookbook Bar & Cafe on the ground floor. The restaurant has a library theme and draws menu items from the 500 cookbooks in the memorial collection of Austin Chronicle food writer Virginia B. Wood.

The hallowed research halls of the Harry Ransom Center on the sprawling Austin campus of the University of Texas are filled with nearly 1 million books and 42 million manuscripts. Brontë family writings? They’re here. A complete Gutenberg Bible? Check. Edgar Allan Poe’s literal desk? Yep. Through July 2020, the center is highlighting its cache of Gabriel García Márquez’s documents in a special exhibition about the author’s life and career.

📚Did you add any Jane Austen to your book collection this holiday? On view now through Jan. 5th, don't miss "Austen in Austin" and examine whether copies of Austen’s books reveal the prides and prejudices of book collecting. . "I declare after all there is no enjoyment like reading! How much sooner one tires of any thing than of a book! — When I have a house of my own, I shaw be miserable if I have not an excellent library." – Jane Austen, Pride and Prejudice . 📕"Pride and Prejudice" (London, Glasgow, and New York: George Routledge and Sons, ca.1880s). On loan. . #janeausten #harryransomcenter #ransomcenter #prideandprejudice #mrdarcy #bookstagram #librariesofinstagram #janeaustenfan #literature #boxingday

Elsewhere on the UT campus, the Lyndon Baines Johnson Presidential Library houses the 36th president’s papers, as well as artifacts aplenty from his time in and out of office. Along with a replica of the Oval Office, exhibits examine the turbulence of Johnson’s administration and the 1960s with focus on the Civil Rights and anti-war movements. For my money, though, don’t sleep on the animatronic LBJ toward the end of your visit.

Meanwhile, amid the skyscrapers of downtown sits a modest, single-story home. The unassuming structure is the O. Henry Museum, where famed short story writer William Sidney Porter—better known as O. Henry—lived. For more than 40 years, it’s also been the site of the O. Henry Pun-Off World Championships, in which punsters from around the world descend on Austin to dazzle with their wordplay.

2020 marks the 25th year of the Texas Book Festival! We can't wait to celebrate all year long with y'all. Learn more about what we're looking forward to at the link in our bio!

Besides an annual bookstore crawl and pun-off, Texas’s capital city also hosts the Texas Book Festival each fall. This weekend-long series of events takes over large swaths of downtown and attracts a diverse lineup of authors. The bookish fun continues after-hours with the related Lit Crawl, where you can rub elbows with visiting authors at local bars and coffee shops for readings, happy hours, and competitive trivia matches.

Prefer YA? The Texas Teen Book Festival moved north to neighboring Georgetown, Texas, in 2019, but it’s still very much in the area if you happen to be here in October.

Throughout the year, I recommend checking in on Austin Shakespeare. The theater company’s season is always an eclectic mix of works by the bard and modern productions. In late spring (before the unbearable heat of summer fully sets in), Austin Shakespeare also does a run of free performances in Zilker Park.

Want to pitch your money to a good cause? The nonprofit Austin Bat Cave hosts Story Department, literary events inspired by The Moth in New York City. At each event, storytellers riff on a set theme, and your entry fee goes to fund Austin Bat Cave’s summer camps and youth workshops. Bonus: Story Department is hosted at Home Slice Pizza, which is likely on your list of tourism to-do’s anyway.

If you don’t happen to be in town during any of the high-profile events, all is not lost. Every Tuesday evening, you can join Austin Poetry Slam for a night of competitive spoken word poetry at Native Hostel for less than $10.

Truly, Austin’s got something for every reader.