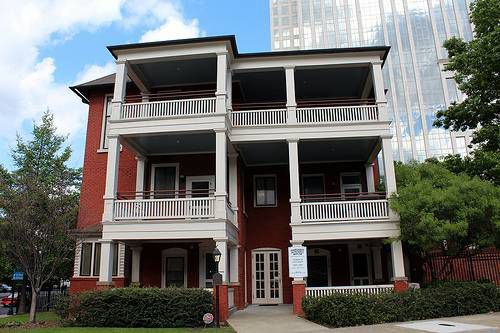 I grew up with two sisters who watched Gone With The Wind about twice a week. And when they weren’t watching it they were reading the book.  So back in June, when I got to go to the Margaret Mitchell House And Museum, they were jealous jealous jealous, and I couldn’t wait to rub it in.

After a brief drive through Atlanta, we arrived at a three story building with red walls and white columns. I don’t know anything about architecture, but the museum’s website says that it is a “Three story Tudor Revival Building.”

The only thing that really mattered, however, was that this was the house where Margaret Mitchell wrote Gone With The Wind! I was conflicted. This my first visit to any sort of any literary mecca. I wasn’t sure how I would or should react. As I walked up the steps I felt a decided lack of goosebumps, but Atlanta was hot as blazes.

The first thing I saw in the gift shop was a sign saying that I couldn’t take any pictures of the inside of the building. Sorry! So I’m including some pictures from Flickr. Here’s the exterior. I was there with a media escort as part of my book tour, so she marched us right in and conducted most of the tour herself.

The entrance has a ton of memorabilia from the movie. Film stills hang on the walls and there are plaques and explanations about the adaptation for the screen.

Also, I have to mention this: it was so cold in there! Everywhere I looked, some poor soul was rubbing his or her arms rapidly, trying to restore circulation.

As we walked, our escort narrated bits of Margaret Mitchell’s life, Clark Gable’s quirks and foibles, and other bits of gossip. The building was pretty busy, and everyone was whispering except us.

“Oh, here it is! I knew you’d love this!” She pointed at an old typewriter. “This is one of the few things in the building that isn’t a recreation,” she said. “This is actually the typewriter! And you can write on it! Go ahead!”

I sat on the tiny chair and pressed a typewriter key. Clack! That’s when I noticed that most of what people had written on the page were wisecracks.

I wrote Gone With The Wind. She’s a fraud.

Why is it so cold in here?

I love this house so much. When can I move in?

I tried to type something and the ribbon broke, so that little adventure ended before it began. I’m sure I also would have made a lame attempt at humor, so it’s probably for the best.

The museum is pretty small, and the only other thing we did that took any time at all was to visit Mrs. Mitchell’s bedroom. I couldn’t believe how small the bed was! And not just for one person, but for a couple!

The interior of the room was beautiful, though. Old buildings (well, what we consider old in America) have a personality to them that is lacking in much of modern housing. There were all sorts of charming little details, from the embroidery on the blankets, to the artfully scattered piles of papers on the end tables. I tried to imagine Margaret Mitchell in this room, typing out the manuscript that would become the book that so many people would love, revile, and talk about for decades to come. 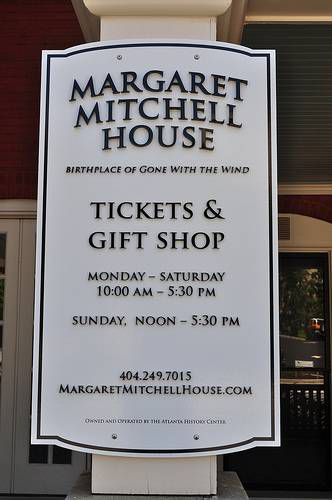 I waited for the shiver. The sense that I was on holy ground. It didn’t come. Perhaps it was simply too cold in there.

It costs $13 to take the tour and I’m glad I went. I was slightly saddened that the tour was so short, and that so many of the possessions in the collection were recreations. But the Margaret Mitchell House is an integral part of American literary history. An iconic piece of art–whether you consider Gone With The Wind a piece of trash or a transcendent triumph or a glorification of racism or a plain old great story–was produced there. If you’re a diehard Mitchell or Gone With The Wind fan, I think it’s probably worth the money. I’ve talked with some other folks who were pretty disappointed in the placed, but they had the usual complaints that accompany anything touristy: expensive gift shops, bang for the buck, too cold, and so on.

I’m glad I went and I’d go again. I need another crack at that typewriter without the ribbon breaking.

Have any of you been there? What did you think?