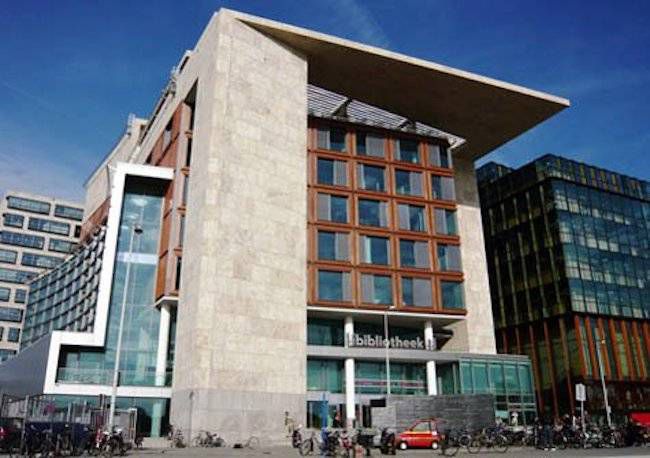 Planning a trip to Amsterdam? Here are 7 secrets about the city’s literary scene, as told by a resident who spends far too much money on books…

1. The most interesting writing about Amsterdam comes from immigrant women

The obvious choice here is Anne Frank, but she’s the obvious choice because what she wrote was completely enthralling. As a German refugee Anne was reliant on the kindness of strangers in a country that’s famously unwelcoming to immigrants. This is a theme that appears again and again in writing about Amsterdam but Anne’s depiction of the constant tug-of-war between gratitude and fear of betrayal is, still, astounding.

Ayaan Hirsi Ali is a Somali-born, Dutch-American duel citizen. An extremely divisive activist, filmmaker, and writer, Ali has written about her experiences as an immigrant and anti-Islam activist in Amsterdam. Her autobiographies, Nomad and Infidel, give a unique insight into race tensions and religious extremism in The Netherlands. 2015 saw Ali elaborate on this later theme with the publication of Heretic: Why Islam Needs A Reformation Now.

The Ministry of Pain by Dubravka Ugresic is the story of Yugoslavian exile Tanja Lucic, a professor of literature now teaching at the University of Amsterdam. Her students are mostly fellow exiles from Yugoslavia and they pay for their studies by assembling S&M equipment in a sweatshop nicknamed “The Ministry”. Tanja encourages the class to embrace their “Yugonostalgia”, which angers some members of her faculty and sends her life into a downward spiral. You should probably read this book.

Long may this continue; books set in Amsterdam are very popular right now.

The Minaturist by Jessie Burton tells the story of young bride Nella Oortman, recently moved to Amsterdam to be with her new husband. Set in the 17th Century (because back then Amsterdam was pretty much the only European capital where a gentlewoman could walk around on her own), this is a story of a repressed, religious society where the only thing valued more highly than God is money. Nella and her new husband seem destined for tragedy but can Nella’s elaborate dollhouse save them?

Yes, the hero of Donna Tartt’s third novel spends most of his time in Amsterdam stuck in a hotel room. But those sections of The Goldfinch do a pretty efficient job of demonstrating what an anonymous city Amsterdam can be. It’s possible to step out of Central Station and not hear a single word of Dutch, speak to a Dutch person or experience any kind of Amsterdam life. Irvine Welsh covered the same phenomenon in Filth, a novel which included a lost weekend in Amsterdam and the city’s unique ability to provide all the sex and drugs a tourist could need, without actually making eye contact.

The bench where they filmed the Fault in Our Stars adaption has since been stolen but Amsterdam stills holds plenty for fans of John Green’s tragi-comic YA novel. The only decent map available is in Dutch (although it has informed me that I used to live next-door to the hotel Hazel and Gus stay at!) but just bring your own tear-soaked copy of TFIOS and you’ll be fine.

3. They have one of the best, most diverse, literary festivals in Western Europe

There are plenty of literary festivals in Amsterdam but the most exciting is Read My World; a festival devoted to international literature that actually delivers. Literary events have a rather sad tradition of fielding predominantly all-white, all-male panels to discuss The Big Questions (How much is the internet destroying literature, a lot or a whole bunch? How can we protect the elderly white statesman? Who would win in a fist-fight – Hemingway or his dick? etc). Read My World offers an antidote to this, looking to explore international writing via (properly) international writers with a fantastically diverse set of speakers and topics. Read My World previous editions include RMW Arab, RMW Caribbean and then Southeast Asia in October this year, check out the program here.

4. “Expat” guides to the city are best avoided

This is a tricky one to write, what with me being a (relatively) wealthy, white expat, but: do not buy guidebooks by wealthy, white expats if you want to gain any real insight into Amsterdam. The Netherlands is a tax haven, it’s got ongoing problems with race relations and police brutality, there are high profile politicians who believe that Islam should be outlawed and the government just banned women from wearing the niqab on public transport.

What has this got to do with books? Well there’s a current trend for expats to publish 300+ page guides that spend 50 pages on stropwaffles and 0 pages on anything even vaguely critical of, for example, the Dutch people’s penchant for dressing up in black face at Christmas time. If someone can’t be bothered to do anything other than regurgitate the party line (that the Dutch are super-liberal, happy-go-lucky clowns) then they don’t deserve your money. Stick with Lonely Planet and try talking to some real life Dutch people.

5. They give good library

This is hardly a secret, just turn left out of Central Station and you’re tripping over the imposing OBA, perched on the Ij and overlooking the floating Chinese restaurant (unconfirmed reports suggest that someone may have once actually eaten there, once, maybe). But the way the Dutch run their libraries is a slightly better kept secret. By asking patrons to pay for either a 50 book or a 100 book pass the libraries make it possible to offer both an astonishing range of books and discounts to seniors, students, and the unemployed. They’ve also managed to monetize the library buildings (Dutch and English language classes, exhibitions, readings, cafes, etc) without pushing out the books – something libraries in other European countries are still struggling with.

6. There are (some) Dutch writers published in English!

Americanah is big in The Netherlands and the majority of the population speak fairly immaculate English so it can be difficult to source good translations of Dutch literature. Here are a few authors worth checking out:

Corinne Duyvis, author of YA fantasy novel Otherbound, is passionate about disability rights and representation in literature. She recently hosted Autism on the Page and is an editor at Diversity in Kidlit: a blog devoted to improving the portrayal of disability in YA.

Harry Mulisch escaped transportation to a concentration camp during the Second World War, thanks to his father’s collaboration with the Nazis (both Mulisch and his mother are Jewish). He has since written extensively about the war, myths, legends, and betrayal. Start with The Discovery of Heaven: a novel about trying to bring order to a chaotic world.

Cynthia Mc Leod’s best known novel, The Free Negress Elisabeth, is the fictionalized account of one woman’s determination to defy racial stereotypes and to marry the man she loves. Based on Guyana-born Elisabeth Samson and drawing on McLeod’s own experiences of Dutch colonialism: it’s an essential read for anyone hoping to understand the impact Dutch nation building had on the world.

Kader Abdolah is an Iranian-born writer who has lived in The Netherlands as a political refugee since 1988. The House of the Mosque is set during the Iranian Revolution and details the changing fortunes of one Iranian family. Good translations are still relatively difficult to source but the 2010 Canongate version is highly recommended.

7. There are second-hand and alternative book shops everywhere

Ahem, check out my Instagram account for sexi pixx of Amsterdam’s gorgeous literary locations (and what I’m reading on days when it’s too rainy to go outside).