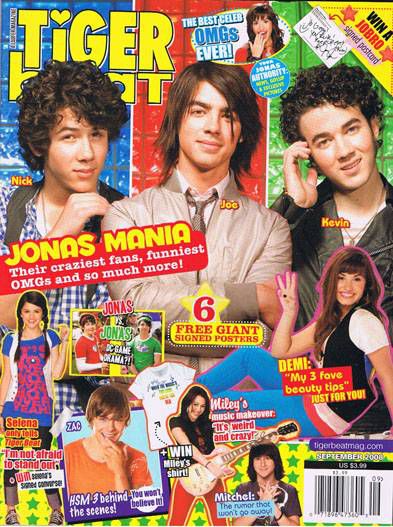 Last week I listened to John Green’s The Fault in Our Stars. Again. For the third time since I first listened to it in February.

Putting all creepiness about the fact that I am a forty-year-old woman making a list of dreamy, fictional teenage boys aside, here’s who I would feature in the pages of the Literary Tiger Beat of my imagination.

Augustus Waters, The Fault in Our Stars: Obviously. He is, after all, the inspiration for this column. Tall, athletic, blue-eyed, damned Augustus is smart and sensitive and says all the right things at the right time. Also, self-deprecating and unafraid to show affection. He is, the ideal, crush object for women of all ages.

Ponyboy Curtis, The Outsiders: The youngest of the Curtis boys was my first, and longest, literary crush. As far as I can remember, The Outsiders was the very first book to make me sob my eyes out. I was eleven when I discovered this band of lovable greasers, and Ponyboy quickly stole my heart. A shy, sensitive, polite reader? What was not to love. Also, the fact that he stood up for little Johnny added major points, but what really puts him on the dreamiest of dreamy list is his memorization of Robert Frost’s “Nothing Gold Can Stay.”

Confession: Ponyboy was nearly usurped by Sodapop but only because Rob Lowe’s memoir Stories I Only Tell My Friends was so damn funny, and I felt I owed Sodapop some love. Then I came to my senses.

Peter Hatcher, Tales of a Fourth Grade Nothing: Okay, okay I know, Peter’s like a tween, but all those teeny-bop magazines always included a few tweens for the younger readers. Peter’s my shoutout to the tweens amongst the imaginary readers of my imaginary magazine. I recently re-read “Tales” and I was surprised by how smart and sarcastic Peter is, while also being totally sincere. He’s a good one, and you know when he grows up he’s gonna be totally awesome.

Dallas Winston, The Outsiders: You can’t have Ponyboy without Dally. They’re like the yin and yang of literary crushes. These two represent the eternal struggle all heterosexual women face between wanting to save the bad boy and wanting to be saved by the good boy. What elevates Dally from being just a greasy hood to a crush-object is not just Matt Dillion’s portrayal of him in the movie, but his allegiance to the family that he chose. Also, saving children from a burning building.

Tiny Cooper, Will Grayson, Will Grayson: The Literary Teen Beat of my mind fights against heteronormativity and is all inclusive. It will seem more inclusive next week when I make a list of the dreamiest female teen characters. Anyway, Tiny Cooper is a big, bold, openly gay teenager who does his best to make his friends happy. He’s a football player who writes a play about his life that features the ghost of Oscar Wilde. Who doesn’t appreciate Tiny Cooper?

Kid, Brooklyn, Burning: Now, I don’t know if Kid is a boy or a girl. Author Steve Brezenoff is a friend of mine and I still don’t know Kid’s gender. What I do know is that he/she is a sensitive, music-loving teenager who flees his/her intolerant dad and ineffective mom to live on the streets of Greenpoint in Brooklyn and falls madly in love with Scout (whose gender is just as mysterious).

Sebastian Prendergast, The House of Tomorrow: Sebastian seems like a long shot. He’s a sheltered, weird, home-schooled kid who lives in a geodesic dome with his grandma. But when he makes a friend and discovers the wonder of Rock & Roll, Sebastian comes out of his shell and charms the heck right out of readers.

Tom Henderson, King Dork: As you may have notice I have a real weakness for the rock & roll boys. I’m hopeful that the managing editor of Literary Tiger Beat has a different kind of weakness so our imaginary magazine isn’t totally filled with imaginary teen rockers. Speaking of, Tom Henderson (a.k.a. Chi-Mo) is not only King Dork, he’s the King of the Imaginary Teen Rockers. Funny, smart, and a serious problem with the “Cult of Catcher in the Rye,” Tom would probably be on one of those fold-out posters you could hang on your bedroom wall.

Scott Pilgrim, The Scott Pilgrim Series: Yeah, so Scott is probably a little on the too-old side to be in Literary Tiger Beat, but at the start of the series he has the emotional maturity of a fourteen-year-old boy. So that totally counts, right? Besides being a total badass video-game style ninja, Scott’s the charismatic kind of guy who draws people to him (and not just evil ex-boyfriends).

That’s all I got. I leave it up to you to fill-in the rest of the pages. Who would you like to see in Literary Tiger Beat? Next week, we’ll talk about the girls.