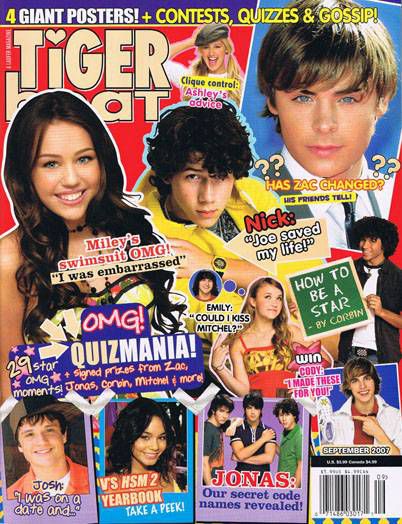 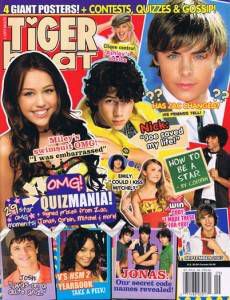 Oh look! It’s a new issue of Literary Tiger Beat featuring the dreamiest female teen characters I could think of! I don’t know about you, but if I were a thirteen-year-old booknerd again, I’d totally be begging my mom to buy this for me (along with the latest Sweet Valley High book).

Elizabeth & Jessica Wakefield, Sweet Valley High Series: These stunning, twin blondes from California are to Literary Tiger Beat what Mary-Kate and Ashley Olsen were to actual Tiger Beat, but minus the hobo clothes because you know Jessica Wakefield would never be seen in something so ill-fitting and ugly.

Katniss Everdeen, The Hunger Games Trilogy: I don’t need to read the trilogy to know that Katniss deserves a few pages in this imaginary magazine. Just like I never had to own a record by the Backstreet Boys or N’Sync or Justin Bieber to know that teen girls love the crap out of them.

Vera Dietz, Please Ignore Vera Dietz: I don’t know what compels authors of young adult fiction to make their characters friendless, especially when you can never quite discern why this cool, smart, a little sardonic person has no friends. That’s not the case with Vera. I know why Vera doesn’t have any friends. She doesn’t have them because she invested all she had in the damaged boy next door, Charlie, and when Charlie died she didn’t know how to make friends. Vera is so smart it’s hard not to love her, and Literary Tiger Beat is all about the smart girls which is why Bella Swan will never grace the pages as long as I am editor.

Skank Zero Hopeless-Savage, Hopeless Savages: Greatest Hits 2000-2010: She’s the youngest daughter of 70s punk rockers Nikki Hopeless and Dirk Savage, and arguably the coolest of the kids. Zero’s a high school student who fronts her own punk band, The Dusted Bunnies, and dates the smartest kid in class, Ginger Kincaid. As if that’s not enough to earn her an esteemed spot on the pages of Literary Tiger Beat she’s also a spark plug of a character who makes up her own nonsense swear words and spurs family into taking all kinds of adventures.

Beezus Quimby, Beezus & Ramona: Sure, sure I realize that choosing Beezus over Ramona is a little like choosing Chad Lowe over Rob Lowe, but I’m sticking by Bee’s side. She’s just as cute as Ramona. She’s just as smart as Ramona and people totally like Beezus just as much as they like Ramona. When did it become okay for one character be better than everybody, huh? Because that’s not what Literary Tiger Beat is about. We should totally just FORGET RAMONA!

Caitlin Ryan, The Caitlin Trilogies: This one goes out to all my GenX sister in the crowd. I don’t know how many read or remember the “Catitlin” series of books. They sprang from the brain of Francine Pascal — Sweet Valley High creator — about the same times as the beloved series about the twins. Caitlin was a rich, wounded, beautiful prep school junior who was like a brunette, meaner version of Jessica Wakefield. Caitlin is devious and cold until her frost exterior is melted by scholarship cowboy kid, Jed Michaels. The three sets of trilogies followed Caitlin and Jed from high school to college to life post-college. In the world of Literary Tiger Beat Caitlin Ryan is the Pari Hiltonesque character.

Hazel Grace Lancaster, The Fault in Our Stars: Sometimes when I have nothing better to do I spend time debating myself over who is dreamier Hazel or Augsutus. Hazel usually wins. She’s a smart book lover who has a penchant for watching America’s Next Top Model marathons. Despite her fear and knowing that she will die sooner rather than later, Hazel jumps into the kind of love affair every teenage (hell ever heterosexual woman) girl dreams about. It is dreamy and sad and so painfully perfect you cannot help but love Hazel even though you know it’s going to hurt like hell.

Editors Note: I’m ashamed to admit this list of dreamy fictional female teens is much harder to come up with than the male version. Perhaps my rules are too strict. No adult fiction which cancels out the Lisbon Girls and Scout Finch. Only one middle-grade which disqualifies Harriet the Spy and Pippi. Nobody who is actually real which dismisses Laura Ingalls and Ariel Schrag (this, however, gives me hope that I have a lot of Literary Teen Beat issues to go). Or perhaps it’s my failure as a reader to not have read enough young adult books with dreamy female characters. Or maybe I’m just old and my memory is failing.

Aria, Emily, Spencer, and Hanna, The Pretty Little Liars series: This one is a total cheat that I am not going to apologize for. I have not read any of the “Pretty Little Liars” books. My fourteen-year-old niece, however, claims they are the awesome. I have, however, seen every episode of the TV show based on the books and it is the kind of decadent pleasure I’d call guilty if I didn’t believe in shaming that which brings pleasure. The show is like “Dawson’s Creek” meets “Twin Peaks” but with much better hair. These characters were made for Literary Tiger Beat (and I wouldn’t be surprised if the actresses who played them on TV were actually in the actual Tiger Beat).

Jo March, Little Women: I’m not breaking my own rule here am I? Little Women is still considered young adult fiction, right? I hope so, because if I couldn’t include Jo March on this list my heart would break right in two. If this were the special sisters-only issue we’d include all the March girls, because each one has something to nominate her for dreaminess. But this is not the special sisters-only issue, so Jo gets to stand alone, which makes sense because she’s the sassiest, literariest, independentest (just go with the made up words) of all the March sisters.

So, now it’s up to you. Who did I miss? Whose non-inclusion in this issue was such a grievous oversight you cannot even believe I was so stupid? I’m sure there are a ton, because even I’ve noticed I didn’t include a single Judy Blume character (blaming that more on faulty memory than actual oversight). You, you dear Literary Teen Beat readers must fill in the rest of the pages.