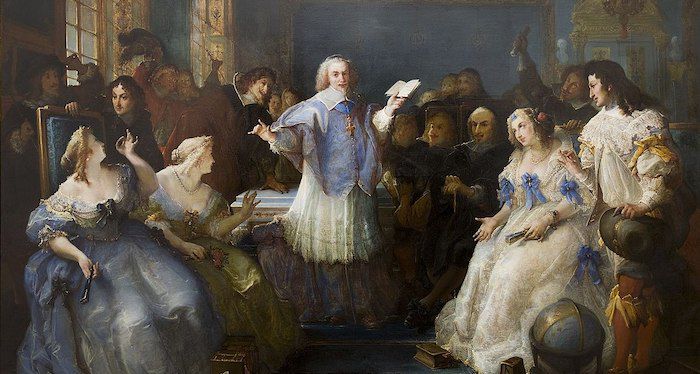 What is a literary salon? In order to properly answer that question, I must give some history, going back as far as the 7th century CE but primarily sticking to the 16th to 19th centuries.

Emperor Charlemagne used to invite his friends into his bed chamber while he dressed in the morning; they would fill him in on gossip, and if they had any disputes, he would settle them. I assume this was exactly like when I wake up, roll over in bed, and check Twitter on my phone. These gatherings were referred to as petit levers (or levees), and later formalized as courtly etiquette. The practice spread to England* and then back to France via Catherine de’Medici, whose husband Henry II of England held levees for royalty and peasants alike; she encouraged her son Charles IX of France to continue the practice. Some 100 years later, Louis XIV formalized the rules even further, and at his petit levers everyone stood. By that time, similar customs had been formed by non-royals in Italy, which quickly spread to (you guessed it) France; these gatherings would become known as literary salons. *I guess this does give new (old) meaning to the title gentleman of the bedchamber.

A salon, named for the type of room in which they were often held (sala or salone is Italian for a reception hall or living room, translating literally to hall or lounge), was a place for people to exchange ideas. Those people were often, but not always, creative types, including artists and writers. These gatherings became popular during the Italian Renaissance in the 16th century and flourished during the French Enlightenment in the 17th century. The private nature of salons, compared with levees, allowed ideas to be shared without fear of the government — including ideas that might be critical of said government. Additionally, the private nature of salons made them common for women, who were most likely excluded from the levees. One of the many women who hosted literary salons in 17th century France was Madame d’Aulnoy, who led a truly wild life.

Literary Salons in the Middle East

The above is the commonly accepted history of the literary salon. So common, in fact, that I only stumbled upon another likely version of the truth: literary salons began in the pre-Islamic Arab world, when women writers were celebrated publicly and held literary gatherings where they functionally invented literary criticism. These gatherings evolved into woman-hosted majlis, or events, AKA salons.

I have had trouble finding concrete information about this history, perhaps because in the west we insist on taking credit for everything, but it looks as though the tradition was revived in the 19th century Arab Renaissance, when it became common for wealthy Middle Easterners to be educated in Europe; which direction the ideas flowed is unclear. If you’d like to learn more, I did find a book called Arabic Literary Salons in the Islamic Middle Ages: Poetry, Public Performance, and the Presentation of the Past by Samer M. Ali, which should shed some light on the matter.

It appears, looking at documentation on salons, that Paris in the 18th century was essentially wall-to-wall salons. They were hosted by nearly every prominent (wealthy) Parisian woman, usually with a guest artist in attendance, whether a painter, a writer, or some other admired figure. Moving into the 19th century, they became common among male writers, as well — while the Club de Hachichins was ostensibly a gathering for the purpose of smoking weed, there is little doubt that Alexandre Dumas, Victor Hugo, Honoré de Balzac, and Charles Baudelaire (among others) were also talking about art and politics.

A tremendous amount has already been written about literary salons in 17–19th century France and the rest of Europe, so I won’t linger.

Literary Salons in the United States of America

First Lady Martha Washington held salon-style gatherings weekly at the White House throughout George’s presidency, giving private citizens access to the government and allowing members of Congress, visitors, and other people to mingle in a semi-informal setting. This set a tone for gatherings in the U.S. that mirror the rise of literary salons in Europe.

Herman Melville met Nathaniel Hawthorne at a literary salon in 1850. Salons were increasingly popular in Massachusetts specifically at that time, possibly due in part to The Dial, a literary paper edited by Margaret Fuller (on whom Hawthorne would allegedly base Hester Pryne). Ralph Waldo Emerson, a founding member of the journal with other members of the Hedge Club, or Transcendentalist Club, wrote to Fuller of his hopes for the magazine:

“I begin to wish to see a different Dial from that which I first imagined. I would not have it too purely literary. I wish we might make a Journal so broad & great in its survey that it should lead the opinion of this generation on every great interest & read the law on property, government, education, as well as on art, letters, & religion.”

In other words, a wholehearted attempt at a literary salon in print. Incidentally, the journal was named with the intention of evoking a sundial at the suggestion of Amos Bronson Alcott, Louisa May’s father.

The thing about Massachusetts in the 19th century was, it was an absolute hotbed of literary greatness. In Concord alone Emerson, the Alcotts, Fuller, Hawthorne, Henry David Thoreau, and Elizabeth Peabody are just a few of the still-known luminaries among the many literary residents of the time. Down the road (literally) in Amherst was Emily Dickinson, whose sister-in-law, next-door neighbor, and possible lover Susan Gilbert Dickinson wrote for the Springfield Republican and hosted literary salons. The Republican was edited by Samuel Bowles, who also published some of the few of Emily’s poems that were published in her lifetime. I really urge you to watch Dickinson on Apple TV+ if you can, because in addition to being delightful it portrays many of these people and the salons.

Literary Salons in the 20th Century and Today

Gertrude Stein, her brother Leo, and Alice B. Toklas hosted literary salons in Paris, where people gathered to admire the Steins’ collection of Cezans, Picassos, and more, and to discuss art and literature. Their guests included, at various times, Pablo Picasso, Henri Matisse, Ernest Hemingway F. Scott Fitzgerald, and Thornton Wilder. Also in Paris at the same time, Les Deux Magot (a café) was a common meeting place of writers including Hemingway, Simone de Beauvoir, and Jean-Paul Sartre. Some of the same people also gathered at Silvia Beach’s Shakespeare & Co. bookstore.

It might be argued that the Algonquin Round Table, AKA the Vicious Circle, was a literary salon, although the members did not use that phrase to describe themselves (at least not that I can find). Originally meeting for lunches and to roast one another, they took to playing games, took trips together, and even put on a review titled No Sirree! which ran for a single night in 1922. No Sirree! was conceived at painter, illustrator, and sometimes Circle member Neysa McMein’s 57th Street studio, where the Circle sometimes met for, well, salons. McMein would paint while her guests conversed, played the piano, and wrote their review.

At the same time a few miles north, A’Lelia Walker threw lavish parties in her Harlem home. Her guests included literary luminaries such as W.E.B. Dubois, Langston Hughes, and Zora Neal Hurston. Walker’s informal salons evolved into a members-only club (membership was $1 per year) called The Dark Tower, and her philanthropy financed a portion of the Harlem Renaissance while the literary gatherings she hosted provided space for an exchange of ideas that was vital in the movement. In the Refinery29 article, Walker’s great-granddaughter said: “the idea of having a ‘salon of one’s own’ was as essential to the Harlem Renaissance as Virginia Woolf’s notion that a ‘room of one’s own’ was necessary to write fiction.” The article’s author, Jamia Wilson of The Feminist Press, compares the literary salons of the Harlem Renaissance to Black Twitter, and I think she is onto something. Any gathering of the minds can be a salon.

Nowadays we have book clubs, writing groups, and the group text; we have Twitter, we have Zoom gatherings. Pre-pandemic, there were still literary salons. Angels Flight Literary West, a Los Angeles–based literary magazine, hosted salons in the before times at Clifton’s Cafeteria and The Last Bookstore. Gotham Writers, based in New York City, holds write-ins, currently virtual. PEN America, Lambda Literary, Tin House, and other literary foundations offer fellowships and conferences. Conventions in various genres such as science fiction frequently offer kaffeeklatsches (literally “coffee chatter”), a chance to informally meet with a literary figure (usually a writer, editor, or agent) and chat.

I close with this clip from America’s Next Top Model in which judge André Leon Talley defends a young designer’s vision and gives a perfect description of a salon: