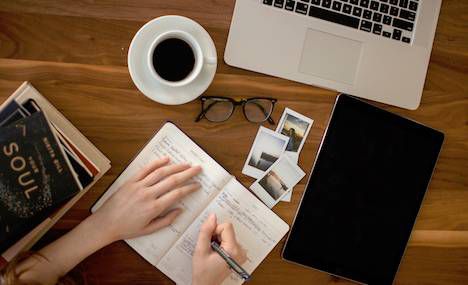 We’ve all seen the quote from Anne of Green Gables, the one that shows up around October 1. It’s a good one, of course, and one that gets some nice sharing across social media. But what about the other 11 months of the year? What sorts of pithy, deep, fun, odd, and thoughtful quotations are out there to celebrate each of them? If you’re a lover of quotations and/or a lover of sharing thoughtful things across social media, then this collection of literary quotes for every month of the year will be up your alley. 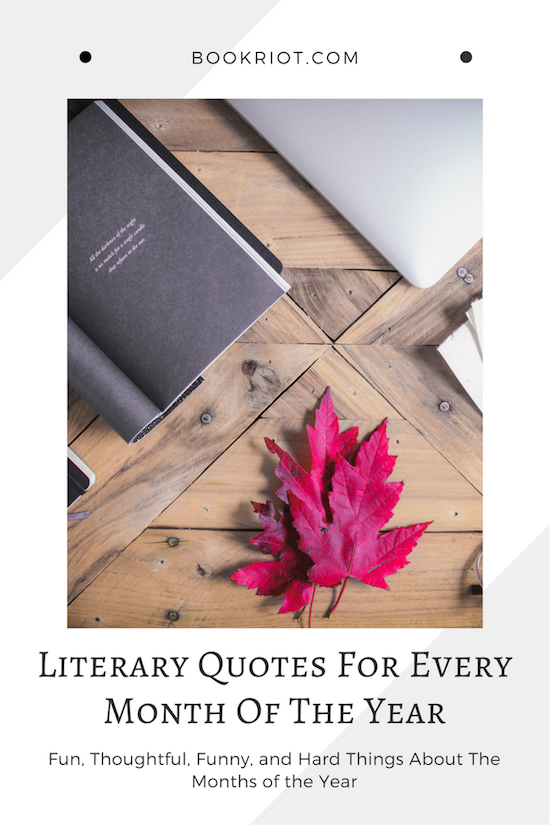 Something worth noting: quotations, as found through both traditional reference works like Bartlett’s and through online collections, tend to be very heavy on white voices. This is likely due to a lack of anthologizing powerful quotations, and thus, a lack of them being shared.

Have a favorite literary quote for any month that’s missing? Drop it in the comments, and we’ll make a nice, big compendium of literary quotes for every month of the year. It’d be especially great to hear underrepresented voices here.

Quotes have been verified as best possible, and links to corresponding poetry and/or books have been included as well.

“January is the month for dreaming”

“No one ever regarded the First of January with indifference.  It is that from which all date their time, and count upon what is left.”

“To read a poem in January is as lovely as to go for a walk in June.”
― Jean-Paul Sartre

“In January
it’s so nice
while slipping
on the sliding ice
to sip hot chicken soup with rice.
Sipping once
Sipping twice”
― Maurice Sendak

“February is the border between winter and spring”

“February, when the days of winter seem endless and no amount of wistful recollecting can bring back any air of summer.”

“Late February days; and now, at last,
Might you have thought that Winter’s woe was past;
So fair the sky was and so soft the air.”

“February is a suitable month for dying. Everything around is dead, the trees black and frozen so that the appearance of green shoots two months hence seems preposterous, the ground hard and cold, the snow dirty, the winter hateful, hanging on too long.”

“[Y]ou have such a February face, so full of frost, of storm and cloudiness”

― Shakespeare, Much Ado About Nothing

“It was one of those March days when the sun shines hot and the wind blows cold: when it is summer in the light, and winter in the shade.”

“March is the month of expectation

The things we do not know

The Persons of Prognostication Are coming now.

We try to sham becoming firmness,

But pompous joy Betrays us,

as his first betrothal

“March came in that winter like the meekest and mildest of lambs, bringing days that were crisp and golden and tingling, each followed by a frosty pink twilight which gradually lost itself in an elfland of moonshine.”

“April is the cruelest month, breeding
lilacs out of the dead land, mixing
memory and desire, stirring
dull roots with spring rain.”

“The April winds are magical,

And thrill our tuneful frames;

To bachelors and dames.”

“Spring is made of solid, fourteen-karat gratitude, the reward for the long wait. Every religious tradition from the northern hemisphere honors some form of April hallelujah, for this is the season of exquisite redemption, a slam-bang return to joy after a season of cold second thoughts.”

“April hath put a spirit of youth in everything.”

“O, how this spring of love resembleth

The uncertain glory of an April day”

“A gush of bird-song, a patter of dew, A cloud, and a rainbow’s warning, Suddenly sunshine and perfect blue– An April day in the morning.”

“For May wol have no slogardie a-night. The seson priketh every gentil herte, And maketh him out of his slepe to sterte”

“Sweet May hath come to love us,
Flowers, trees, their blossoms don;
And through the blue heavens above us
The very clouds move on.”
― Heinrich Heine, “Book of Songs, New Spring, No. 5”

“May, more than any other month of the year, wants us to feel alive.”

“Winds of May, that dance on the sea,
Dancing a ring-around in glee
From furrow to furrow, while overhead
The foam flies up to be garlanded,
In silvery arches spanning the air,
Saw you my true love anywhere?
Welladay! Welladay!
For the winds of May!
Love is unhappy when love is away!”
― James Joyce

“The month of May was come, when every lust heart beginneth to blossom, and to bring forth fruit”

“It was June, and the world smelled of roses. The sunshine was like powdered gold over the grassy hillside.”

“A cold in the head in June is an immoral thing.”

“Green was the silence, wet was the light, the month of June trembled like a butterfly.”

“At midnight, in the month of June, I stand beneath the mystic moon.”
― Edgar Allan Poe

“It is June. I am tired of being brave.”

“In early June the world of leaf and blade and flowers explodes, and every sunset is different.”

― John Steinbeck, The Winter of Our Discontent

“It is dry, hazy June weather. We are more of the earth, farther from heaven these days.”

“The Summer looks out from her brazen tower,
Through the flashing bars of July.”

“August rain: the best of the summer gone, and the new fall not yet born. The odd uneven time.”

“August rushes by like desert rainfall,
A flood of frenzied upheaval,
Expected,
But still catching me unprepared.
Like a matchflame
Bursting on the scene,
Heat and haze of crimson sunsets.
Like a dream
Of moon and dark barely recalled,
A moment,
Shadows caught in a blink.
Like a quick kiss;
One wishes for more
But it suddenly turns to leave,
Dragging summer away.”
―  Elizabeth Maua Taylor

“The brilliant poppy flaunts her head
Amidst the ripening grain,
And adds her voice to sell the song
That August’s here again.”
― Helen Winslow

“But when fall comes, kicking summer out on its treacherous ass as it always does one day sometime after the midpoint of September, it stays awhile like an old friend that you have missed. It settles in the way an old friend will settle into your favorite chair and take out his pipe and light it and then fill the afternoon with stories of places he has been and things he has done since last he saw you.”

“[T]hat old September feeling, left over from school days, of summer passing, vacation nearly done, obligations gathering, books and football in the air … Another fall, another turned page: there was something of jubilee in that annual autumnal beginning, as if last year’s mistakes had been wiped clean by summer.”

“September: it was the most beautiful of words, he’d always felt, evoking orange-flowers, swallows, and regret.”

“In October, a maple tree before your window lights up your room like a great lamp. Even on cloudy days, its presence helps to dispel the gloom.”

“There is no season when such pleasant and sunny spots may be lighted on, and produce so pleasant an effect on the feelings, as now in October.”

“I’m so glad I live in a world where there are Octobers.”
― L. M. Montgomery, Anne of Green Gables

“October is a symphony of permanence and change.”

“October, baptize me with leaves! Swaddle me in corduroy and nurse me with split pea soup. October, tuck tiny candy bars in my pockets and carve my smile into a thousand pumpkins. O autumn! O teakettle! O grace!”

“In the entire circle of the year there are no days so delightful as those of a fine October.”

“November is usually such a disagreeable month…as if the year had suddenly found out that she was growing old and could do nothing but weep and fret over it. This year is growing old gracefully…just like a stately old lady who knows she can be charming even with gray hair and wrinkles. We’ve had lovely days and delicious twilights.”

“In November, the earth is growing quiet. It is making its bed, a winter bed for flowers and small creatures. The bed is white and silent, and much life can hide beneath its blankets.”

“Some of the days in November carry the whole memory of summer as a fire opal carries the color of moonrise.”

“November comes
And November goes,
With the last red berries
And the first white snows.

With night coming early,
And dawn coming late,
And ice in the bucket
And frost by the gate.

The fires burn
And the kettles sing,
And earth sinks to rest
Until next spring.”