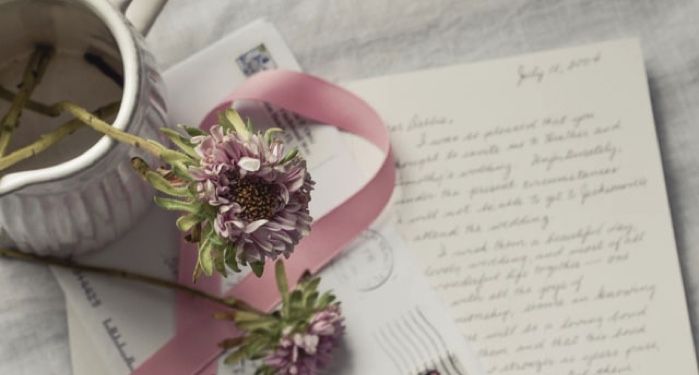 I grew up writing letters — in the 1980s and ‘90s, it was the only accessible way to communicate with long-distance friends that didn’t cost money by the minute. As a child I had pen pals acquired through the Growing Without Schooling network (my longtime pen pal’s name was, if I remember right, Summer) as well as camp friends, and later, on the cusp of adulthood, I wrote love letters.

When I was a teenager I discovered a series of published diaries in a small room in my local library. They were The Early Diary of Anais Nin, and I was obsessed with them, reading every volume. I never read her adult diaries. I borrowed, but returned unread, A Literate Passion, which contains the letters between Nin and Henry Miller. I had trouble reading their love letters because I was consumed with my own: I regularly exchanged letters with several friends, and over the course of my teens I was in love with a good half of them.

But I had one pen pal with whom it was actually love, or at least it might have been. I’ll call her M. We wrote letters about anything and everything — the content really didn’t matter, it was the sentiment conveyed, the length of satin ribbon enclosed, the hearts drawn on the envelope, my letters addressed to The Most Beautiful Girl, faithfully delivered by the same mail carrier on the treacherous mountain road where my mailbox faced the road next to a bluestone wall and wild raspberry bushes.

She would tell me about her boyfriends, about falling asleep driving her parents’ car, about what she was reading — she always had a book recommendation, Nabokov and Poe and I don’t remember who else. I don’t know anymore what I wrote to her, but I imagine that I told her about what I was reading, too, or about the latest Keanu Reeve movie marathon I’d curated for myself, or about discovering a galaxy far, far away (I was a latecomer to Star Wars). We would write I miss you, I miss you, we’ll see each other soon, and she signed her letters “I love you” and probably meant it. It was a long time ago and I will likely never know.

I had other pen pals. I met L via letter while he was at a boarding school for troubled kids. Our mutual friend T asked me to write to him, and he became the big brother I never had. T and I exchanged letters, too, competing to write the longest one (I won, at 27 pages, though in retrospect the three that were left intentionally blank probably ought to have been disqualified). N and I created a fictional cult over long letters exchanged in loneliness, confessing our hopes and our anxieties, pretending to worship the great orange god Tropicanas. S and R and countless others exchanged zines with me. One of my favorite books at the time was Griffin and Sabine, another A Woman of Independent Means.

But I always go back to the love letters. Which might explain my passionate urge to read literary love letters now. I want to know what Emily Dickinson said to Susan Gilbert in Open Me Carefully (“We are the only poets, and everyone else is prose”), to read the words exchanged between Vita Sackville-West and Virginia Woolf in Love Letters (“I am reduced to a thing that wants Virginia”). Again and again I come to the words of Frida Kahlo in An Intimate Self-Portrait, telling Diego Rivera “there are no colors” to paint, because her love for him has used them all.

I devour, too, fictional love letters, like the emails exchanged by Alex and Henry in Red, White & Royal Blue. On the other hand, I have put off reading Persuasion all the way into my 40s partly because I am afraid I will read Captain Wentworth’s infamous letter to Anne and fall in love with him myself.

(Please note that nearly all of the authors mentioned herein are white. This is entirely due to my own deficiencies in my reading history. In writing this essay I looked for published books of literary love letters between authors of color and failed to find any, though as an aside I must note that I’m very excited to learn about Sister Love, which is letters between Audre Lorde and her friend and fellow poet activist Pat Parker.)