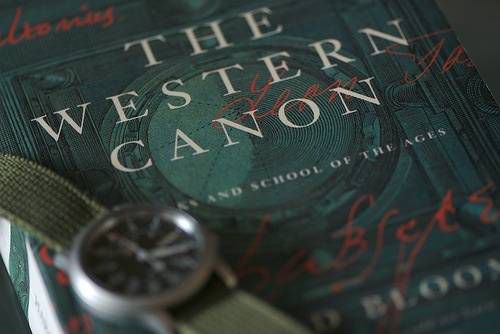 I’m into books. So much so that I own more than one book about books. Yes, that’s right, books about books. Two of them have been particularly helpful when it comes to deepening my understanding and appreciation for books that are considered “classics”.

First off is The Western Canon, by Harold Bloom. This is essentially a reading guide to the “great works and essential writers of the ages.” It can be a bit difficult at times, since Harold Bloom treats literature almost like a science, and deeply evaluates each of the works he discusses. He says that in all of literature, nothing is as important as Shakespeare (I tend to agree). It is through this book that I came to appreciate just how good Charles Dickens is, and it constantly reminds me that I should read more by Jane Austen. It is also why I read a story by Tolstoy called Haji Murad (not exactly a title that makes one rush to Amazon):

“It is my personal touchstone for the sublime of prose fiction, to me the best story in the world, or at least the best that I have ever read.”

The Western Canon is full of recommendations like this, though not so strongly worded, for classic books. It also, and this is it’s best quality, explains why the book should be considered a classic; why it is part of the western canon. 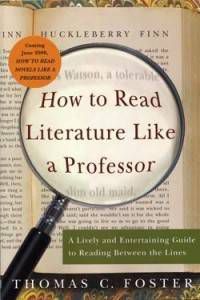 The second book-about-books is How to Read Literature Like a Professor, by Thomas C. Foster. While Harold Bloom is all for the classics of ages past, Mr. Foster is all for what I hazard to refer to as “modern classics,” the works of Hemingway and Toni Morrison. This book is like a secret decoder ring for literature, explaining to readers what exactly it is that writers really mean when their hero eats breakfast with the villain, or when a man walks into a rainstorm. Blind characters, characters having sex, a woman in a red dress starting a fire in winter while the moon is full. Mr. Foster decodes all these and many more to ensure that we as readers get what the authors were really trying to say, the hidden meaning behind the words. It is much lighter and easier reading than The Western Canon and doesn’t take itself as seriously. In fact, I think I read it faster than many a thriller I’ve read, but maybe that’s just me. Judging by the number of mentions in the book, Mr. Foster’s favorite book is Morrison’s Song of Solomon. Or perhaps The Great Gatsby:

“If modern American literature consisted of only one novel, and if that novel were Gatsby, it might be enough.”

Oddly enough, Mr. Foster makes no mention of Hadji Murad. I give both these books my highest recommendations. Perhaps How To Read Literature is a better place to start, since it makes for an easier read, while The Western Canon is basically a textbook. Both these books have “Essential Reading” lists at the back and judging from them, Charles Dickens is the greatest novelist of all time and Great Expectations and Bleak House his greatest novels, and therefor the greatest novels of all time.