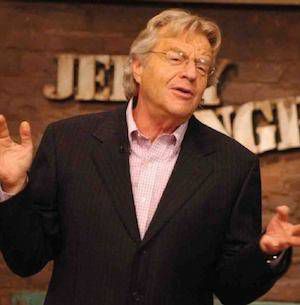 One of the things that moves literature is drama–and who’s the king of drama? You might say Shakespeare, Sophocles, or Williams, but that would be overlooking one very obvious answer.

Identify these literary classics based on their Jerry Springer interpretations, and click here for answers:

Wife: He’s been running around with some basic bitch and doesn’t even care if anybody knows about it!

Husband: At least I’m not screwing some country bumpkin bootlegger!

Jerry: You spend a lot of time partying. Is this something that interferes with your relationship?

Wife and Husband: Whatever.

Sassy Audience Lady: WHAT I WANNA KNOW IS WHO IS TAKING CARE OF YOUR BABY! Y’all got a baby at home, what’s WRONG with you!

Jerry: But you have a secret.

Jerry: Isn’t it true that you’re in love with your sister-in-law’s husband and have been trying to win him over for years?

Teen: I got kicked out of school. Again.

Jerry: Why do you think you keep getting kicked out?

Jerry: Why did you get kicked out this time?

Teen: (shrugs) Grades, or something, I don’t know.

Jerry: Is it true that after you got kicked out, you were drinking, cavorting with older women, and you tried to hire a prostitute?

Teen: Yeah. They serve me at bars. I think it’s on account of my gray hair.

Jerry: I think your son has something he wants to tell you.

Son: I know you cheated on mom when you were going away on business trips!

Jerry: So. You two are cousins.

Jerry: You didn’t see any problem with that when you got married?

Woman: NOPE?! I didn’t even want to have sex with you, I thought it was wrong. Now look how our kids turned out!

Woman: One of our sons abandoned his pregnant wife to run off with a gypsy woman, and the other one likes little girls. I thought they would be born with pigs’ tails, but this is worse!

Sassy Audience Lady: Girl, you gotta kick him to the curb!

Woman: Pfft. Without me, this family would fall apart.

Jerry: So you were abandoned by both of your parents and raised by your grandparents.

Jerry: And one of your uncles committed suicide.

Jerry: So what happened when you ran away?

Girl: I found out one of my uncles was stealing money from me, so I stole it all back and got the [bleep] out of there.

Uncle: YOU LITTLE CIRCUS FREAK! YOU TOOK MY MONEY!

Girl: IT WAS MY MONEY, [BLEEP]FACE! (flips him a double bird)

What other books would make juicy episodes of Springer? Tell us in the comments!