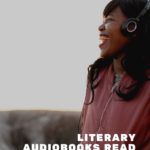 When you look up authors that read their own books, you primarily get a list of celebrities and public figures whose stories are read aloud by them but are most likely written by ghostwriters. Occasionally, you will see David Sedaris or Bill Bryson on the list, two people who are considered masters of the audiobook, but for me, these don’t quite scratch my literary itch enough.

Let me be clear: I have nothing against these popular audiobooks. I just realize that some of you, like me, want to listen to more literary books read by their creators, and, short of looking up every book you want to hear online, there is no great place to start.

Michael Silverblatt from Bookworm said in an interview, “It is so important to hear an author’s voice…” With this comment, I very much agree. Hearing how the author articulates their words can change your understanding of the content and deepen your relationship with the book in ways your own inner monologue may not while reading the prose.

The authors mentioned below are all people who I believe not only attach rhythm and inflections through mere oration, but also give a level of depth to the work when they read it aloud. This happens by adding the body and intention of the flesh-and-blood author to their words.  I hope you check these books out, not only in audiobook form but in their written form as well—both will add to and change your understanding of the work.

Toni Morrison comes up on most lists of authors who have read their own books, but if I were to not mention her here, I believe that would be a huge detriment to this article.

Toni Morrison has read all her books for audiobook editions. Her smooth voice rolls her sentences together in a flawless calming and poetic tone. However, this can be slightly jarring as you listen to her read about the abuse of slaves in Beloved, or child abuse in The Bluest Eye. But her voice adds a cadence, and suggestive tone when appropriate, that deepens your understanding of her penned words.

Andrea Lawlor is a writing professor at Mount Holyoke College and has read their debut novel Paul Takes the Form of a Mortal Girl for the audiobook edition. Lawlor’s work has been praised by many authors, such as Garth Greenwell who said that the book was “something that has been missing in queer literature.”

I will admit here that I have yet to read Paul Takes the Form of a Mortal Girl. However, it is the next book on my reading list, and I am extremely excited to read the written prose Andrea Lawlor speaks so beautifully.

Garth Greenwell’s newest book Cleanness is read by him in the audiobook edition. His Kentucky/heartland accent is soothing in a different way than Morrison’s is, but has a similar destabilizing effect when, in chapter two, a dark nonconsensual sex scene plays out for the narrator.

Cleanness was a necessary and inevitable book, as it breathes humanity into brutal sexuality that is so often fetishized in the wake of Fifty Shades of Grey and in the presence of the internet. Greenwell was the perfect author to write a book such as this. His prose is so masterfully crafted that the book’s poetic beauty matches its social importance. I highly recommend both the print and audio editions. And, if you would like to hear a sample, a chapter of this book titled “Harbor” was published in The New Yorker, and is read by Greenwell for the podcast The Writer’s Voice.

Kwame Anthony Appiah is a professor at NYU who has published several books of philosophy, many of which are read by the author. My personal favorite of his works is The Lies That Bind—Rethinking Identity. This book takes a deep look into how identities are formed and how they interact with each other. I believe it should be required reading for everyone, and as a mixed-race person myself, this book helped me in a plethora of ways when thinking about my own identity.

Appia’s “Queen’s English” accent, as he terms it, brings a light-hearted flavor to a book that grapples with very serious topics. Many of his anecdotes and examples take on a much livelier spin when read by Appia, and at times when I chuckled while reading, I laughed out loud hearing him articulate the lines.

Benjamin Dreyer is the copy chief at the Random House imprint. Dreyer’s English, his first book, is a codex for the most book-nerdy of us. It details Dreyer’s thoughts on editing prose and tries to paint a picture of what copy editing books is like. For those of us that copy edit, this book is essential. Dreyer’s English details and expresses a certain non-prescriptive (though not quite descriptive) form of editing that uses style books but does not equate them with dogma.

Dreyer is a funny writer, and typesets his jokes to read well on the page, often dropping the punchline below the set up so the reader is forced to keep the timing of a joke while moving their eyes across the page, but hearing Dreyer read the book allowed is even funnier. I have yet to find another book that can make a subject like copy editing into a fun comedic listen and read.

I dare say I do not need to introduce this author, as he may be one of the most famous authors alive right now. But, if you didn’t know Ta-Nehisi Coates reads Between the World and Me in the audiobook edition, and it is worth listening to. His voice adds a level of personal depth that is in the prose but is expanded when hearing him read his own words.

Maya Angelou is maybe the most well-known Black poet to ever have lived in America. I doubt there are many avid readers who have not read her work, or at least know her name. She read at the inauguration of Bill Clinton in 1993, which is quite an amazing performance and can serve as a taste for the incredible tambour of her voice.

Angelou reads all her books for their audio editions, and each is quite incredible, but I Know Why the Caged Bird Sings is something exceptional. Her voice rings powerful as she reads allowing the book to echo across the decades in which it has existed for us to hear and read.

I hope this list points you in a good direction for books to listen to while you drive or do other activities. I do believe that listening to an audiobook read by the author can drastically change your perspective on the words. And, in conclusion, at every chance you have to hear a writer read their own work I hope you indulge yourself in the wonders and additional information that come from spoken prose.