While Jeff enjoys a summer frolic, Rebecca and guest host Andrew Losowsky, Senior Books Editor at The Huffington Post, talk about Apple’s ebook price fixing, what to do when you love an author but hate their politics, a giant Mr. Darcy emerging from a lake in England, and more.

This episode is sponsored by Fire Knife Dancing by John Enright: 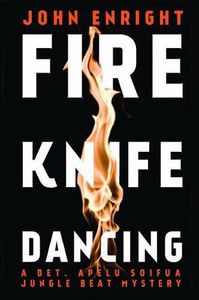 an detective Apelu Soifua lives on the knife edge of two disparate cultures, navigating a perilous dance between native and new that, over the years, has landed him in his fair share of trouble. So when a routine patrol on a remote jungle estate uncovers an inter-island smuggling ring, it doesn’t take long for Apelu to realize there’s more than just cigarettes and bootleg CDs at stake. Someone in Apelu’s corner of paradise is trafficking humans—and they won’t think twice about setting up a cop to take the fall.

Now Apelu stands accused of murder, and his only shot at proving his innocence is to go AWOL from his job and his wife until he can unearth the truth. Hunted by the police, his only ally is a young American widow whom he quickly discovers is anything but what she seems. Apelu knows he’s playing with fire—but can he unmask a killer before he gets burned?

Giant statue of Colin Firth as Mr. Darcy emerges from lake in England

I Wear the Black Hat by Chuck Klosterman

To America with Love by A.A. Gill

The Light in the Ruins by Chris Bohjalian

Kiss Me First by Lottie Moggach

Browse all episodes of The Book Riot Podcast.