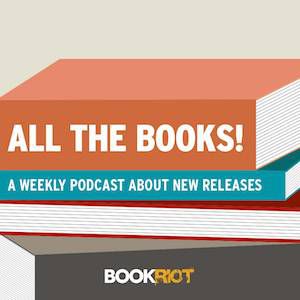 This episode was sponsored by Book Riot Insiders, Riddance; or, The Sybil Joines Vocational School for Ghost Speakers & Hearing-Mouth Children by Shelley Jackson, and Third Love.

BOOKS DISCUSSED ON THE SHOW:

Once Upon a River by Diane Setterfield (tw: domestic violence, suicide, harm to children)

MORE BOOKS OUT THIS WEEK

The Dakota Winters by Tom Barbash

North of Dawn: A Novel by Nuruddin Farah

Hearts of the Missing by Carol Potenza

The Songbird by Marcia Willett

King of the Road by R. S. Belcher

Queen of Air and Darkness (The Dark Artifices) by Cassandra Clare

Once a King (Clash of Kingdoms) by Erin Summerill

Unpresidented: A Biography of Donald Trump by Martha Brockenbrough

How We Win: A Guide to Nonviolent Direct Action Campaigning by George Lakey

The Mansion: A Novel by Ezekiel Boone

The Great War in America: World War I and Its Aftermath by Garrett Peck

King of the Dinosaur Hunters: The Life of John Bell Hatcher and the Discoveries that Shaped Paleontology by Lowell Dingus

The Deadly Deep: The Definitive History of Submarine Warfare by Iain Ballantyne

For the Sake of the Game: Stories Inspired by the Sherlock Holmes Canon by Laurie R. King (editor), Leslie S. Klinger (editor)

Murder at the Mill: A Mystery (The Iris Grey Mysteries) by M. B. Shaw

The Man Who Would Be Sherlock: The Real-Life Adventures of Arthur Conan Doyle by Christopher Sandford

Theater of the World: The Maps that Made History by Thomas Reinertsen Berg