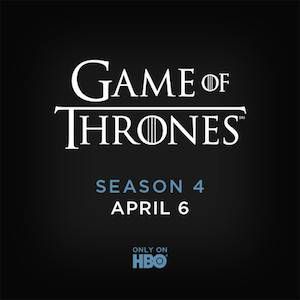 SPOILERS AHEAD but you knew that already.

“I’ll bet this is when it’s going to happen. Do you want to know? Episode two is called The Lion and the Rose.”

A couple of nights before the season four premiere of Game of Thrones, this was the question I asked my husband, sitting on the couch with my phone in hand, list of episode titles pulled up on IMDb. We’d been trying to guess when all of the “big things” were going to happen, and he totally had it pegged: he’d guessed episode two for the Purple Wedding. Yep, he’s pretty smart. The episode title confirmed it.

The Purple Wedding is perhaps not quite as infamous as the Red Wedding before it and, to some, serves as a small fragment of the vengeance fans felt they deserved after their beloved Starks’ blood-soaked demise. Sorry to remind you of that, Stark fans.

Now that it’s time to actually discuss the episode itself, written by George R. R. Martin, I’m having trouble applying my critical thinking skills because my first instinct is to fangirl over all the big and small perfect moments, and my second is to go into my theories as to who’s behind the death of the bastard boy king.

We open with Ramsay Snow hunting humans and generally being the most awful person alive as a point of comparison. Joffrey sucks, and he’s more large-scale dangerous because he’s the king; on a purely human level, however, Ramsay is probably worse. Joffrey kills and commissions deaths, but Ramsay flays people, hunts them, sets dogs on them. Basically: there’s always going to be evil in the world, and the worst of it will likely fly under the radar. Joffrey could’ve been a Hitler-type because he had the power and the connections, so it’s good that he’s been eliminated, but Ramsay is no less evil if lacking in visibility. It seems that even his father, Roose Bolton, whose sigil bears the Flayed Man, is questioning whether Ramsay has any worth as a human being or not. Which, that probably covers the “nurture” part of Bolton’s bastard’s problem.

Meanwhile, Melisandre. I’m sorry, readers, that Carice van Houten is so distractingly beautiful that I can’t write intelligently about her character. I just sit there, lost in her eyes. The religious traditions in the series are among the more fascinating elements to me, and Melisandre seems to be the only one getting anything done on that front (besides Thoros, of course). The scenes between Stannis, Lady Selyse, and Melisandre were both relaxed and tense, somehow, and the tension lay with Stannis, who pretty much has no room for any other expression on his face. Melisandre talks to his daughter about religion. Can someone please direct me to (or write) a well-researched, thoughtful academic paper about the religions in this series? I’d appreciate it.

But the real stories take place in King’s Landing.

The Little Things
Loras and Prince Oberyn sharing a winking, flirtatious moment, continuing to offer us glimpses of the sexual freedom and overall lack of judgment the Dornish people take pride in and that does matter later on in the series. Jaime Lannister confronting Loras about his impending marriage to Jaime’s sister and lover, Cersei. Cersei confronting Brienne about her love for Jaime. BRIENNE BEING BRIENNE (she bows, not curtsies, to the king because she is a knight, and the best knight of all on top of it, and she never mastered the curtsey anyway). Tywin and Lady Olenna hanging out and being old together: how badly did this scene make me want to, like, open a retirement home in King’s Landing so I can be the activities director, oh and also for either one of them to spend any time at all there. Tyrion sends Shae away because they’ve been caught, and I’m once again saddened by the way her character changed from book to screen. Events still to come are going to look so different now. Her craftiness has been lost or neglected by the writers, and I would’ve loved to see the capable and beautiful Sibel Kekilli bring that Shae to life.

Jaime and Bronn go to a secluded location to train Jaime’s left hand to wield a sword. I’m extremely happy with this change from the book, in which it’s tongueless Ilyn Payne who trains him. This gets us more Bronn screen time, so yay yay yay!

The Big Things
Sigur Rós getting booed off the stage by Joffrey during “The Rains of Castamere.”

And of course, Joffrey’s death and the lead-up to it, which was perfect. His grandfather gives him one of the titular two swords from last week’s episode, forged from Ned Stark’s former blade. Tyrion presents Joffrey with a book because of course he does, The Lives of Four Kings, from which he knows Joffrey—any king—could learn quite a bit. History, repeating, etc. And Joffrey seems, just for a moment, as if he’s going to play it gracious instead of being the little shit we know he is, as if maybe he’s actually going to grow the eff up and stop reminding us that, unlike Ramsay Snow, he’s had everything he’s ever wanted and needed handed to him and never learned gratitude, instead turning out evil. Another academic paper: nature and nurture in the lives of Ramsay Snow and Joffrey Baratheon.

But no. As soon as he gets his sword, he chops and slices the book to bits. Horrors! He didn’t even have time before he died to make any pretty crafts out of it.

We see Margaery’s attempts to tame him (she mostly succeeds), and we’re reminded that sure, it seems she could probably handle herself with Joffrey, but probably not because he’s a tyrant and will only become more despicable with age. Then he dies, and it’s a big deal, but again: it doesn’t really change anything because evil still exists, and as Melisandre tells Stannis Baratheon’s daughter: there’s only one hell, not seven, and it’s the one we live in presently.

Readers will recall the amethyst hairnet that Sansa wears, which Lady Olenna straightens while talking to Sansa, just before taking her seat. That hairnet was seemingly replaced with the necklace Dontos gave to Sansa in the show. However, you may also remember that Melisandre has a vision about a maiden with purple serpents in her hair killing King Joffrey, and amethysts are, of course, purple. That leads us to believe that it is in fact Lady Olenna who slips poison into Joffrey’s goblet; clearly, it was not Tyrion as Joffrey leads Cersei to believe by using his final gesture to point at his uncle, who has been thoroughly humiliated by Joffrey throughout the feast. Tyrion has no way to know this is going to happen, that he will be forced to bear Joffrey’s goblet or that Joffrey will “drop” said goblet in an attempt to force Tyrion to pick it up. When, It rolls under the table, Sansa retrieves it—does the show want us to think Sansa poisoned Joffrey’s cup? DID SHE?!)

As it stands, readers and viewers who watched carefully Sunday night are to believe it was the Queen of Thorns who poisoned Joffrey to save her granddaughter from his eventual torment, as he will inevitably get bored and boredom makes him cruel. But of course, “Only a monster would kill a man at a wedding,” she says. But who might kill a monster at a wedding? Also, I one hundred percent believe that if Olenna is the poisoner, she had Tywin’s blessing: Tywin, whose primary concern is not loving his family but protecting the Lannister name and who knows that Joffrey is the bastard son of Cersei and Jaime’s incestuous relationship and just a general bastard. Couple that knowledge with recognition of the facts that a) Tywin himself is unfortunately not immortal and can’t keep his thumb on Joffrey forever, and b) that Joffrey will eventually outgrow caring what his grandfather thinks or advises as he has already displayed, and well, I wouldn’t put it past Tywin Lannister.

We’ll see. I’m very excited to know what Martin has in store for us, and I’d say that I wish he could write every episode of the show because I loved this one so much, but I’d rather he finished his books.