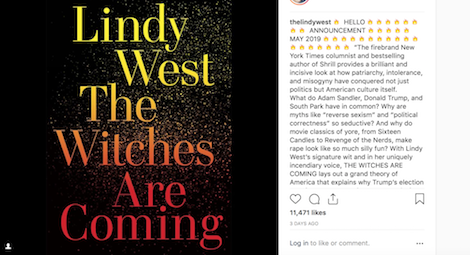 This content contains affiliate links. When you buy through these links, we may earn an affiliate commission.
In my humble (and hyped up) opinion, New York Times columnist Lindy West is one of the most badass writers out there. And I'm SO DAMN HAPPY to see that she has just announced she will have a book out in May 2019. The new book is called The Witches Are Coming, where West will be writing about how "patriarchy, intolerance, and misogyny have conquered not just politics but American culture itself." BRB, I'm preordering this right NOW.

Honestly, I was so sad when West left Twitter because she is so funny, empathetic and an all-around delight to follow on social media (of course, I know she shouldn't endure harassment for being such a wonderful present, so all the more power to her for leaving that trash-fire website behind). So I cannot wait to get my hands on this book and soak up some of her hilarious writing. If you haven't read it yet, West also wrote the book Shrill: Notes from a Loud Woman, where she writes about feminism, her public war against comedians making rape jokes, fatness and online activism. It's a funny read, and I really recommend it. If you're tight on money (or your TBR is just too much right now to add something new to it), some of West's funniest work is online too. (Can you tell she's really, really one of my favorite writers ever? I love her because she manages to talk about really real and important things but she still makes me laugh while doing it and that's such a life goal of mine with my own writing.) I mean, who can resist West's response to Woody Allen's claim that #MeToo is a witch hunt, a New York Times column entitled "Yes, This is a Witch Hunt. I'm a Witch and I'm Hunting You", in which she calls Donald Trump "our predator in chief"? And if we want to go vintage West, I have her take on Love Actually that she wrote for Jezebel, "I Rewatched Love Actually and Am Here to Ruin it for All of You," bookmarked on my laptop just in case I need a laugh. I mean, read this and weep with laughter: "Colin Firth falls in 'love' with Aurelia at first sight, establishing Love Actually's central moral lesson: The less a woman talks, the more lovable she is." Truly though, my favorite thing West has ever written is her re-watch of Back to the Future 2 for GQ back in 2015. I honest-to-God sometimes open this (also bookmarked) re-review when I need a good belly laugh and haven't cried-laughed in a while. I sometimes send it to people who are having a bad day. I truly think it's one of the funniest things I have ever read in my life: "When Marty expresses concern at not having been able to tongue Jennifer, like, at all, Doc Brown says they can take her to the future too. Marty and Jennifer, you see, have to drive to the year 2015 to stop their horrible toilet children from going to prison and ruining everything. (Yo, just a thought, but I kind of feel like it might be time to let this genetic line peter out? Marty's really the only borderline competent one out of three generations. Pick your battles, is all I'm saying.)" Can you tell why I'm excited now? I cannot wait to read more of her words and think about how she sees the garbage our world has turned into. May 2019 cannot come soon enough!