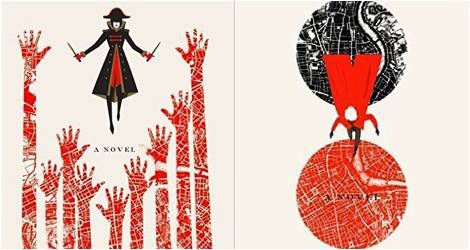 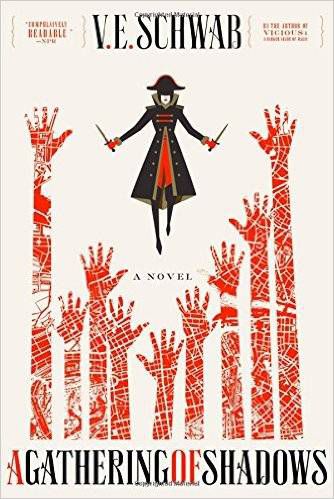 Over the past few weeks, I’ve discovered that I’m the kind of person who likes to break down narrative structures and pick apart what I think works and doesn’t work. I do this for nearly everything I read and watch and listen to. (Don’t ask me about how I think professional wrestling and comic book narratives are exactly the same, or you’ll be in for an hour-long ramble.) So when I finished V.E. Schwab’s A Gathering of Shadows, I did what I do best: tried to tear it apart and see why I really loved it so much.

Look, it’s no secret that I love Schwab’s writing. I’ve gushed about A Darker Shade of Magic to everybody I come in contact with, be it on Twitter or when they walk in my bookstore. I’ve shoved her books onto my favorites shelf in my library of a bedroom, the “I will buy you a copy of your own if you want to read one of these, they’re that good” shelf. (Her upcoming YA novel This Savage Song, though radically different from her Shades of Magic series, is just as fantastic, and the way she flips between her narrator’s voices is one of the best I’ve seen in a long time.) But A Gathering of Shadows was the second book in the series. I fully expected it to suffer Second Book Syndrome.

Instead, I tore through it and found myself bouncing with joy at the end.

But why? Even Leigh Bardugo’s Siege and Storm – one of the few second books that fail to suffer Second Book Syndrome, and which I adore and still refer to as the best of the Grisha trilogy – didn’t leave me bouncing in my seat. What made A Gathering of Shadows so different?

Then I realized: I knew who the hero was. And it wasn’t who I expected. And I loved it.

Everybody who reads this site is probably intimately familiar with the hero’s journey, but for the sake of my sanity, we’ll break it down into its main arcs: hero leaves home at the suggestion of  or with the help of a mentor.

The hero crosses into this new world and begins some sort of quest.

The hero realizes they must learn to master whatever power they’ve been gifted.

The hero “seizes the sword,” so to speak, and rises to whatever challenges face them when they’re least expecting it.

Our hero in Schwab’s Shades of Magic trilogy is not Kell.

Our hero is Lila.

That Lila Bard gets the plot arc and story moments most often associated with the male heroes of traditional fantasy stories can’t be an accident on Schwab’s part. Schwab could have easily set up Kell to take those moments, written a story about Kell discovering his powers, about Kell saving the day, about Kell’s bildungsroman. She could have relegated Lila to the role of damsel-in-distress (not that Lila would have ever allowed such a thing), or had her act as the scrappy sidekick who always comes through.

Instead, Schwab writes Lila Bard as something Lila may never have expected herself to become: a goddamn hero.

That Lila is our hero comes at a sort of crossroads as to how the story is told to us. After all, Kell is our protagonist. The blurb is from his perspective; we start the story in his point-of-view; it’s his world that we’re living in. We should expect Kell to be our hero. And look, I sort of get why some elitist speculative fiction fans might wrinkle their noses. It’s not quite what they’re used to. The hero’s journey, in their lovely world of classic sci-fi and fantasy, is reserved for the leading male character.

Kell, as powerful as he is, isn’t the hero of this series. True, he has a bit of a hero’s arc in A Darker Shade of Magic: leave home, learn to master his extended power as an Antari, take up the quest of returning the shard of Black London to its home, defeat the rulers of White London, send Holland and the shard through to Black London, and return to Red London.

But as A Gathering of Shadows unfolds, his hero’s arc is over, and he’s given an expanded version of a role many lady characters are often shoved into: the caretaker, the worrier, the person who must balance everything while the hero runs forward with a dagger and a grin. Kell bears the burden of expectations of his kingdom and parents, struggles with the emotional turmoil of his brother Rhys, does his best to maintain the balance of the worlds and of the magic. Not only that, but we learn that – despite Kell’s best efforts – Black London’s tainted magic is still managing to infiltrate other worlds.

That can be off-putting, for those who have learned to expect the male lead to be the hero. In a lot of classic adult sci-fi and fantasy, it is the men who play the role of hero. Take Kvothe in Patrick Rothfuss’s The Name of the Wind, and Bilbo Baggins – or Frodo, or Aragorn – in J.R.R. Tolkien’s Lord of the Rings universe, and Ender in Orson Scott Card’s Ender’s Game. If you want to expand outside of literature, Luke Skywalker in the Star Wars series is a perfect example of a hero in a hero’s journey. For those expecting the hero to be a man, it may feel like Schwab can’t be playing with tropes, because she’s designating those tropes to the wrong characters.

Kell gets his moment in the sunlight, but the underlying core of the series is Lila. It’s Lila – a scrappy lady with a penchant for knives and no problem putting the men around her in their place – who gets to be the hero. Who gets that hero’s journey throughout the entire series. Who believes in stas reskon, chasing danger, and will.

True, we have one more book left to go – one I eagerly await – that could prove me wrong, but let’s look at Lila’s arc so far.

Lila Bard leaves Grey London with the aid of Kell, who teaches her about the other Londons – though, being Kell, he needs Lila to save his life a few times. Lila very literally crosses the threshold into another world, where she joins Kell on his quest to return the shard of Black London to its home, while starting a quest of her own: gain her freedom, no matter what the cost. This takes on a few different incarnations for Lila – she thinks it’s gaining a pirate ship and running from the Londons, while it might actually be mastering the magical powers we now know she possesses.

Then she begins to master her powers, both with the aid of Alucard and by entering into the Element Games, by practicing in the dead of night, behind locked doors, pushing her limits farther and farther – something she learns has dangers of its own.

At the end of A Gathering of Shadows, after months of learning to control her powers and testing out their limits, of celebrating her victories and suffering when she pushed the boundaries too far, Lila Bard runs to rescue Kell. And when our cast of characters realize the trouble he’s in – when Kell is tied up, useless, and Rhy is left screaming on the floor – it’s Lila Bard who takes full control of her powers and puts it all on the line in an attempt to save him. When A Gathering of Shadows ends, Lila Bard is at the very height of her hero’s journey: “seizing the sword” and rising to a challenge facing her when she least expected it.

(Whether she will succeed in saving Kell – well, we will have to wait and see. Curse you and your cliffhangers, Schwab.)

Victoria Schwab took the narrative stereotypically reserved for male characters and gave it to a woman who has no problem chasing her own ambitions and slitting the throats of those who cross her.

Lila Bard is no damsel-in-distress. She’s no plucky sidekick.

Lila Bard is a hero and one of a damned kind.