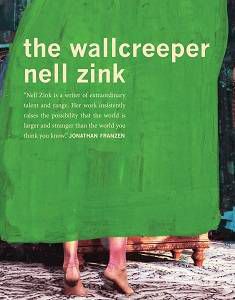 What else do you call it when you read the same perfect graphic novel five times in ten days?

I’m almost afraid to tell you anything about Beautiful Darkness by Fabien Vehlmann and Kerascoët, for fear of ruining some of the black pleasure of reading this inventive fantasy for the first time. It’s just not what you expect. We have fairies, more or less, but they’re more human than they ought to be. They have no discernible magic, barring the magic of their origin; in fact, they’re pathetically unsuited for life.

This anti-fairy tale begins deceptively: Princess Aurora is serving cake to Prince Hector, flirting just as hard as her naïve little soul can flirt. She’s about to kiss him for the first time when their world disintegrates. Literally. Pink globs fall from the ceiling, the walls melt, the floors become swampy and threaten to swallow our heroine until she climbs a narrow passage and escapes into a new world: raining, dark, and dangerous.

The camera pulls back: Aurora and all her people are emerging from the orifices of a very dead little girl, one properly clad in a buttoned cardigan, a rumpled skirt, and a sturdy pair of Wellingtons. All their lives they have existed safely in this child, whose death is never explicitly explained (but surely violent; what else is she doing dead in the woods?) and now they are on their own in a much more dangerous world, where deadly predators and the uncaring forces of nature threaten to destroy the little people one by one.

Princess Aurora is a wide-eyed cutie in a polka dot dress and a grown out blond shag. Her doll-like compatriots come in various shapes. Jane, aloof and independent, stands like an Amazon with a blaze of red hair and the dead girl’s safety scissors strapped to her back with a used Band-aid. Timothy, shy and gothic, wears her long black hair over her face to obscure the fact that she has only one eye, and cradles an orphaned baby. Zelie, crumpled and seemingly helpless, expands as she procures adornments and gains confidence and followers.

Timothy shares her fears with Aurora

After the shock of exile wears off and the dreary nature of survival rears its ugly head, most of the little people exhibit a marked selfishness and inhumanity. As their companions are picked off by wildlife, natural disaster, and their own casual cruelty, they have no ability to mourn. They learn, a bit, about their surroundings—they know not to eat mushrooms, anyway—but they seem more concerned with immediate personal gain than any long term success. A faithful friend reveals himself to be a natural bully and thief, while other characters develop more insidious treachery. Meanwhile, kind, thoughtful Aurora works to procure food for her ignorant subjects, and build them shelters, and broker trade agreements with the woodland creatures.

Perhaps these little fairies are meant to have existed within the mind of the dead girl, each based on particular aspects of her personality. It does not seem to be a coincidence that the dead girl’s name appears to also be Aurora. It’s as if, during her lifetime, the highest aspect of her personality, characterized by little Aurora, can rule over her base urges, but, without the protection of big Aurora, all the negative traits—fear and helplessness and selfishness and gluttony and venality—spin out of control.

The setting is lush, drawn richly in green during the summertime, turning red and gold in the autumn. Individual leaves and blades of grass are rendered in loving watercolor brushstrokes, as are the maggots and flies that eventually infest the body of the dead girl. Even as her flesh rots away, and one now-feral fairy returns to inhabit the moldering corpse, there is a stark beauty drawn into her pathetic death. The lines offer a sense of softness throughout the hardest moments of the story. Beginning with gentle pastels, then moving through primary colors in the forest, to a starker palette in the winter, and finally into earth tones at the story’s surprising conclusions, the drawings seem to mirror Aurora’s internal reality.