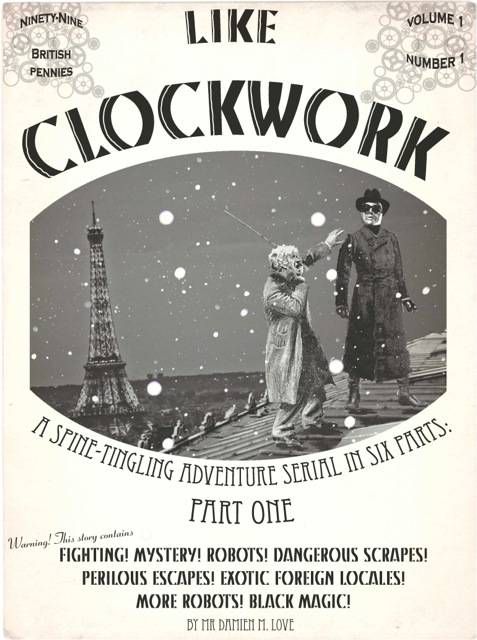 There’s something romantic about a serialised novel. It has a whiff of the Victorian about it, the tang of the analogue, that tantalising gulf between the last episode and the next, with nothing but a cliff-hanger to sustain you. Readers can live on expectation alone. When instant gratification is now taken as an inalienable right, having to wait for something, anything, especially the next chapter of a book, can allow some ancient reading juices to start bubbling away in our minds. 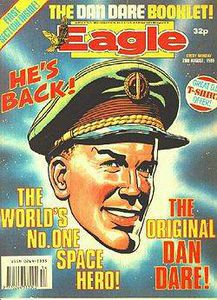 As a kid this delayed gratification was delivered by comics. Nothing as slick as the latest from Marvel or DC. Instead I read The Eagle. With its First World War stories and adventures in an Art Deco outer space, The Eagle read and looked like a mildewed telegraph from post-war Britain. Even in 1980s Northern Ireland (which admittedly still acted like the 1950s).

But the stories, broken up into weekly chunks and arriving at our newsagent every Friday, were amazing. Charley’s War – following a young British soldier through the horrors of the Somme and beyond – made me cry. Everyone dies. Dan Dare, Britain’s brainiac version of Flash Gordon, was in there too. Then there were shorter tales, all about mad inventors, races against time, and men (it was always men) escaping from impossible situations, robots, explosions, maniacs, and romantic situations. Fear and excitement played tag-team with my emotions.

I’ve been thinking about this formative experience lately thanks to Damien Love’s Like Clockwork, a new six-part serial novel. It too arrives every Friday, only onto your Kindle rather than into the corner shop. And it too seems to have channelled all the best parts of those Eagle stories into a thrilling steam punk YA serial novel. 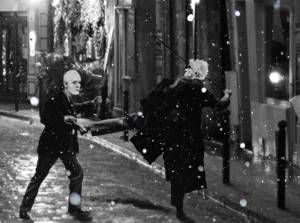 Set across a snowy Europe, it follows lonely, young Alex as he discovers his granddad is more than a genial old man, but is deeply embroiled in an escapade that involves robots with bits of mashed up humans in them. Chased by The Tall Man, Alex zooms from the dull suburbs of the UK to glittering, darkly adventurous Europe capitals. It’s like the best Spielberg films, suggesting to kids that another, more exciting world exists a mere bubble-gum splat away from yours.

Full disclosure: I’ve known Damien for years. We worked on the Glasgow-based newspaper, The Sunday Herald, together. He still writes its TV previews, transforming what is an inconsequential part of most papers into the first thing many people turn to. And he is much funnier than I. And he makes my love of Doctor Who seem pallid and fair-weather by comparison.

This post isn’t an act of nepotism. Five episodes in, Like Clockwork is genuinely great. It also is a perfect excuse to consider the return of the serial novel.

E-readers are stoking the revival. Amazon made a big deal of their Kindle Serials launch last year. And with the possibility of authors being paid for each part of their novel, as opposed to a lump sum for it all, e-serials (as we shall call them) might possibly make the internet pay for authors. Possibly.

With all this in mind, I spoke to Damien about his first foray into e-serials to see whether they really are the future of publishing. He talks about where the revival started, how new technology will create a new wave of book illustration, V for Vendetta, and questions why successful authors would have publishers at all.

Is technology like Kindles and iPads, Nooks reviving the art of serial novels? Is this way of storytelling perfectly suited to these new mediums, as compared to a straightforward novel?

Theoretically, this stuff, and particularly the ability to read on your phone, is perfect for bringing about a resurgence of this form. And, as far as people writing them, it seems it has. But we’re still finding out if it’s going to work that way when it comes to people actually wanting to read them. Because, while the notion is that ‘books’ structured like this are ideal for all the tube and train rides of our busy lives, the other thing technology has brought with it is the idea that we can get everything instantly, and for free. If you look around Amazon reviews of some serials, you’ll still find people complaining about only getting “a bit” of a story. If it’s a long time in politics, a week between episodes feels an eternity if you’re trying to keep momentum going. Also, opinions differ on what counts as a serial. The first stirrings of the nu-tech serialised novel probably came in Japan around 2005 with the emergence of the cell-phone novel (keitai shosetsu), which came in form-following-format bursts of about 100 words a time. But as technology has rolled on, some serials are now coming in at over 100 pages per ‘episode’. 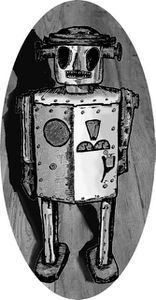 Did you read many serials growing up? Who do you look to as masters of the form?

The Strand Sherlock Holmes stories were all self-contained rather than an on-going story, so those were an influence slightly more in terms of it being a regular event, and also a design aesthetic, particularly the idea of incorporating illustrations.

(As an aside, book illustration and design, I hope, is something the rise in eBooks might help rekindle, and not just in eBooks, and not just in books for children. Publishers will have to start thinking about the physical book as an object in itself again, in the way the best record labels have, and people like Chris Ware and Chip Kidd already are. The idea for the newspaper version of Like Clockwork Part One is basically the limited-edition-gatefold-vinyl. At the moment, though, you’re very limited in what you can do in terms of layout for a kindle, but that will change, and already has with Apple’s iBook. As an aside to the aside, I had an idea, actually, that newspapers seeking to stop falling sales as people get it all online, might consider the idea of reviving printed serial stories in their physical editions, but not include them online. Madness, probably.)

John Buchan’s The 39 Steps, first serialised in Edinburgh’s Blackwood’s magazine, is maybe more of a formal influence. Of course, Charles Dickens is the example everybody cites, and must be The Master, even though we know those stories as novels now, not serials. More recently, Tom Wolfe did it with Bonfire Of The Vanities and Stephen King has experimented often with serialised stories, The Green Mile perhaps most famously – again, though, we tend to forget they came in instalments first.

Of course, we’ve all grown up surrounded by serials: on TV. Ironically, though, the new interest in serialised fiction coincides with the rise in the idea of time-shifting TV, and people not watching week-by-week any more, but gorging on box sets and streams.

Personally, when it comes to words on a page, the biggest influence as a kid was probably the serialised adventures in various comics, Marvel stuff and 2000 AD. I’m withered enough to have read V For Vendetta when it was first coming out in Warrior comic, and that was pretty exciting, waiting an entire month between bits.

But as far as Like Clockwork goes, the inspirations are drawn more from the screen: early cinema serials like Fantomas and Les Vampires by the director Louis Feuillade, muscling in on memories of TV shows like The Avengers (Steed & Peel, not Marvel), various faintly psychotic globe-trotting spies and eccentrics (Danger Man,  Jason King) and old Dr Who.

Do you have any favourite contemporary e-serials?

I have to confess I’m still in love with physical books, and only just beginning to find out about these. I need to check more out. It’s a little off to the side, but one of the things I’ve been most intrigued and encouraged by is seeing that the comic strip artist Chris Reynolds, creator of Mauretania among others, has been making use of the new technology to issue more of his strange, spare and mysterious strips at some speed. 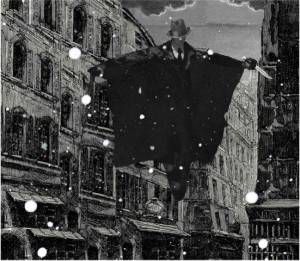 How has the experience of publishing in this way been? Easy? Challenging? Steep learning curve?

All three. I’ve done some traditional independent publishing; along with two friends, I set up an imprint called Kingly Reprieve, and we have put out two novels so far, new editions of “lost” books by the filmmakers Val Lewton and Sam Fuller.

We’re proud of those, but it was and remains a hard slog. Getting distribution is a world of major headaches there. And eBooks are easier store in your hall cupboard, I’ll tell you that. I’ve also been published by a regular publisher myself, when I wrote a book about watching the actor Robert Mitchum, but you quickly discover that you will be left to do a lot of the marketing yourself, anyway.

I’m not hugely up on technology, so I’ve had to learn a lot, and am still, but doing Like Clockwork the way I have has allowed me to kind of suggest a world of the book. The story came first, but putting the site together, and stuff like the illustrations, helps make explicit some of the thinking that is going on between the lines of the writing, if that sounds pretentious enough.
Is it a form that actually makes publishing in this way financially rewarding for authors? Is someone actually, finally, making the internet pay? Or at least have the potential to?

Well, we have to live in hope that the potential is always there, but anyone looking for a way to make cash – any cash, at all, whatsoever – should look for something else. There are the obvious few lucky exceptions that we all know, but writing in general, as you know, is no easy way to make a living, and even less so now than it was 20 years ago.

That said, when it comes to established bestselling authors with a guaranteed readership, I actually don’t know why any of them would choose to use a publisher at all today. The hard slog of getting the word out has already been done. This doesn’t apply to all publishers by any means: but as time goes on, some publishers are going to have to think about what their role is in terms of their agreement with authors; or, at least, start living up to the traditional terms again.

Another aspect of all this is what the price of an eBook should even actually be, a question still very much up in the air. No one is paying for paper or printing or transport or warehousing of physical books, etc. But at the same time, writing 100,000 words is a hellofalotta work. So where do you go in?

Amazon actually runs a kindle-serial programme, where readers pay something like $1.99 up front, and then get every “episode” of a serial automatically delivered to them as it appears. I’ve chosen not to do that with Like Clockwork (I have to risk that interested readers will remember to go and get each instalment as it appears, through prompts on the website; again a week is a long time), because I’m not sure that $1.99 for a novel’s worth of work is really the precedent that should be set. But nobody knows anything, as William Goldman put it.