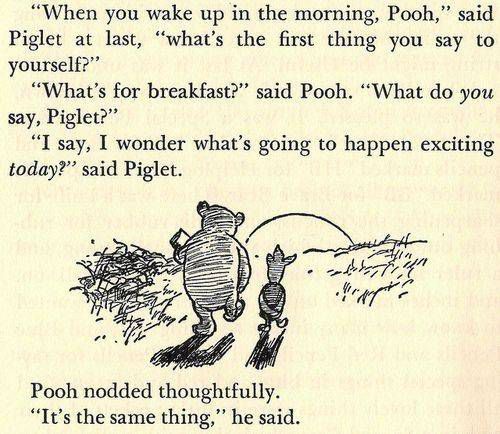 Your childhood is calling, it has some wisdom to share! Sometimes, when I go back and read old favorites, I’m surprised at how much good sense is packed into the books I read before I realized how important they were. The plots were always entertaining, but the life lessons lost on someone who had lived so very little life. Now that I am three decades in, quotes from childhood staples are surprisingly valid and poignant. Here are some of my favorites from A.A. Milne (creator of Winnie-the-Pooh and all of his friends).

“Piglet sidled up to Pooh from behind. “Pooh?” he whispered.

“How lucky I am to have something that makes saying goodbye so hard.”

“Some people care too much. I think it’s called love.”

“You can’t stay in your corner of the Forest waiting for others to come to you. You have to go to them sometimes.”

“Rivers know this: there is no hurry. We shall get there some day.”

“Well,” said Pooh, “what I like best,” and then he had to stop and think. Because although Eating Honey was a very good thing to do, there was a moment just before you began to eat it which was better than when you were, but he didn’t know what it was called.”

“If ever there is tomorrow when we’re not together… there is something you must always remember. You are braver than you believe, stronger than you seem, and smarter than you think.”

“Promise me you’ll never forget me because if I thought you would, I’d never leave.”

“So perhaps the best thing to do is to stop writing Introductions and get on with the book.”