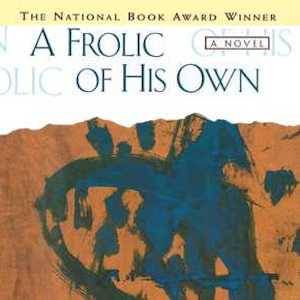 The rewards of being well-read aren’t always tangible, but they definitely exist. One minor benefit of bookishness is that it can give you something fresh to think about when your social media feeds are full of trashy news. Like last week, say, when one story seemed to dominate the headlines. What was it about? Well, an American exchange student in Europe was looking for a photo op and got himself stuck in … let’s just let the Guardian tell us, shall we?

Non-readers saw that article and simply tittered, while sager sorts stroked their chins and said, “Yes, so Oedipal.” Hardcore lit geeks, though, immediately thought of William Gaddis and Szyrk v. Village of Tatamount.

Gaddis first gave an account of this fictional case in his National Book Award-winning 1975 novel J R, but he really did it justice in a book called A Frolic of His Own. Published in 1994, this legal satire also won the National Book Award for its hilarious indictment of American culture. There are dozens of suits, torts, and catastrophes described in the book, but one of the highlights is the Szyrk case, the details of which are fully delinated in a complete legal opinion written by one of Frolic‘s characters, Judge Crease:

The facts are not in dispute. On the morning of September 30 while running at large in the Village a dog identified as Spot entered under and therewith became entrapped in the lower reaches of a towering steel sculpture known as Cyclone Seven which dominates the plaza overlooking and adjoining the depot of the Norfolk and Pee Dee Railroad.

Spot, “so named for the liver colored marking prominent on his loin,” can’t be coaxed to freedom, so the fire department readies its acetylene torches, only to be thwarted by the sculpture’s creator, Mr. Szyrk. He files suit to protect the artistic integrity of his work, declaring that it is subject only to natural forces of decay and must not be tampered with by human hands. The judge’s response to the claim is expressed in spot-on (sorry) lawyerese:

We have in other words a plaintiff claiming to act as an instrument of higher authority, namely ‘art,’ wherewith we may first cite its dictionary definition as ‘(1) Human effort to imitate, supplement, alter or counteract the work of nature.’ Notwithstanding that Cyclone Seven clearly answers this description especially in its last emphasis, there remain certain fine distinctions posing some little difficulty for the average lay observer persuaded from habit and even education to regard sculptural art as beauty synonymous with truth in expressing harmony as visibly incarnate in the lineaments of Donatello’s David, or as the very essence of the sublime manifest in the Milos Aphrodite, leaving him in the present instance quite unprepared to discriminate between sharp steel teeth as sharp steel teeth, and sharp steel teeth as artistic expressions of sharp steel teeth, obliging us for the purpose of this proceeding to confront the theory that in having become self referential art is in itself theory without which it has no more substance that Sir Arthur Eddington’s famous step ‘on a swarm of flies,’ here present in further exhibits by plaintiff drawn from prestigious art publications and highly esteemed critics in the lay press, where they make their livings, recommending his sculptural creation in terms of slope, tangent, acceleration, force, energy and similar abstract extravagancies serving only a corresponding self referential confrontation of language and thereby, in reducing language itself to theory, rendering it a mere plaything, which exhibits the court finds frivolous.

Despite Crease’s distaste for modern notions of creativity, the injunction holds and Spot remains prisoner. A flurry of suits and countersuits filed by participants widespread and sundry goes by, as do hundreds of plot-ridden pages, until nature intervenes herself. Cyclone Seven is struck by lightning and Spot perishes.

Whereupon everyone switches sides. Szyrk now claims the right to dispose of his work as he sees fit, citing the First Amendment and freedom of expression, while the village seeks to maintain the sculpture, which has turned into a valuable tourist attraction. Principles are abandoned in pursuit of money and ego. Like the rest of the novel, the Cyclone Seven saga is simultaneously absurd and frighteningly plausible.

At least the part about it being difficult to extricate yourself from a sticky sculptural situation.