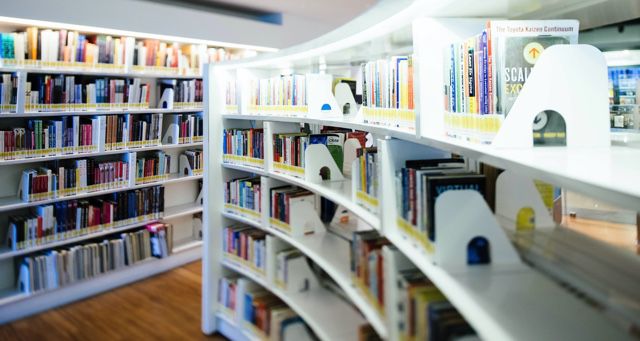 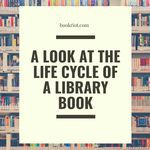 It’s not unusual for the sight of library books in a dumpster to throw the public into a tizzy. The reality is, however, that this is part of the natural life cycle of a library book. Whether the book is beyond repair or simply outdated, the dumpster is often—though not always—the final resting place for library books. If a book is recycled instead of straight trashed, there’s always the possibility it will return as a new book, reincarnated. It’s the circle of life. A new chapter. The turning of the page.

But let’s go back to the beginning. If you’ve never thought much about it, you might now be wondering what is the life cycle of a library book? Where do they come from?

Well, when an author and an idea love each other very much—

Before we get into the details on this, it’s important to note that no two library systems are the same. The paths covered below aren’t necessarily the same paths at your library. There can be differences of all sizes, and to describe every possible route a library book could take would mean surveying each library system—and probably more than once, as differences can pop up book-to-book within systems. This also only covers print books. Digital books, or ebooks, are a more complicated matter, and the model around them is only getting more complicated. Additionally, the information below reflects American public libraries specifically—special libraries and libraries not in the United States likely and do have entirely different methods. (For example, I once worked for a small special federal library which ordered books from places such as Amazon.) Additionally, this does not cover reference books, which generally are not titles customers can check out.

But back to the question: Where do library books come from, and where do they go?

The Life Cycle of a Library Book

It all starts before a title is even specified by the library. While libraries handle the process differently (and the handling of this is frequently dependent on the size of the system to some extent), typically a library will have a point person or department responsible for ordering new materials. Sometimes, if a department is warranted, individuals within that department will specialize in different areas. You may have a staff member dedicated to selecting young adult graphic novels, for example. Or, you might have a staff member whose primary function is selecting all young adult materials. This also goes for non-print material, like DVDs and audiobooks, which are also often obtained from the same supplier as print books.

In some systems, public-facing librarians and library staff may have little to no say in what titles are purchased. In other systems, the collection individual or department may accept recommendations from other staff. Librarians often keep themselves informed about upcoming titles with review journals, like Library Journal and Booklist, by attending conferences where publishers often have a large presence and will present on upcoming releases, and by following authors and other publishing influencers.

The goal, when selecting titles, is not necessarily to choose books you, the librarian, think will be good. Rather, the goal is to select books that your community will have an interest in. Often, there’s a decent amount of overlap in those two categories, but not always. Additionally, “interest” isn’t defined as “will enjoy”—a community in which lots of active research around, say, Nazism, may have an interest in a title written by a Nazi for the purposes of their research without finding pleasure in the material. (The moral benefit of this is that with the purchase of one book, many readers get access, rather than each reader purchasing a copy and funding Nazism—in this case—however directly or indirectly. Of course, depending on your feelings around less black-and-white topics, you may find yourself on the other side of this moral benefit—but that’s for another day.) 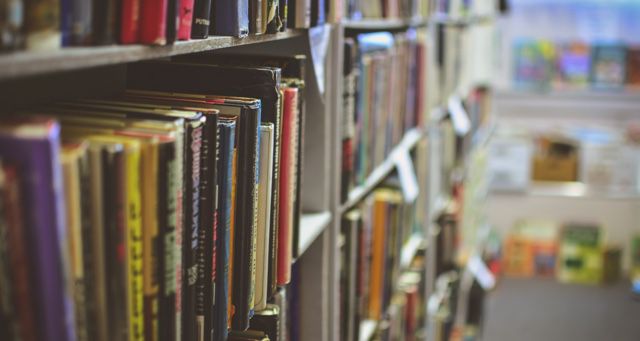 So, congratulations, you’ve chosen a book to add to your library! What’s next in the life cycle of a library book?

Books also come in the form of donations. While you won’t want to count on your donated books being added to the library’s collection, it’s possible they will. Sometimes, donated books are handled entirely by the Friends of the Library, and end up in community book sales, the proceeds from which are then funneled back to the library. However, Montrose Regional Library District, for example (and certainly others) absorbs donated books into the collection. But there’s a caveat, MRLD Youth Services Librarian Kacee Eddinger said: “If a book is donated, you have to smell it to make sure there is no mold since the mold spores can affect the other books without you knowing until it is too late,” she wrote. At her library, librarians then sort through the books to determine which would be valuable to the collection.

And then there’s the more traditional means with distribution companies.

Some companies will also offer cataloging and spine labeling services. In the event that the supplier does not or the library opts out of that service, when the titles (plural, because they often come in boxes of several books through the mail or some other delivery service) arrive, the cataloging department takes over. It’s good practice to compare the packing or order slip with the contents of the box. From there, if they aren’t already cataloged and labeled, the cataloging department will get to work categorizing the titles within their system—whether it’s Dewey, Library of Congress, or something else—and then add barcodes and the stickers on the spine which indicate where books belong on the shelf or, spine labels. Some libraries also opt to add some indication on the book cover—often also on the spine—that lets browsers know the book is new. This might be a removable sticker that says “new,” a sticker with the month and year, or something more subtle, like a dot, that mostly tells staff to shelve the book in a special location.

Other processing details might include putting the book into a plastic dust jacket for protection, stamping the date of receipt on the inside of the book, adding an ownership label or stamp (this is sometimes simply noted on the barcode sticker), or reinforcing books—especially paperbacks and children’s materials—with book or packing tape. All of these details come down to the library system or, even more microscopically, to the individual handling and processing new materials. For example, one staff member in my library system started adding numbered stickers to the spines in books in a children’s series, and this wasn’t necessarily standard practice across her branch, let alone the system.

Depending on the library and/or the integrated library system (the software which is responsible for managing the collection and patron accounts), scanning the the book is often a part of this process so the system knows the book is now in the collection and ready for use. This is called different things depending on the software and the library system, but might be referred to as checking in or doing inventory on an item.

All right, so you’ve ordered, received, and processed the book. Now, it’s finally the most exciting time in the life cycle of a library book: it’s time to share it with the public!

Some popular titles, particularly if the library adds them to the searchable catalog prior to receipt, may go straight to the hold shelf for a customer eager to read them. Others will head out to shelves designated for new materials and still others may get mixed in with the rest of the existing collection. There’s no “right” way to handle this, except for whatever works best for a given community.

Once it’s on the shelf, the customers can have at it. The number of times a given book is checked out is dependent on the book’s popularity and condition. Some books, despite going out dozens of times, remain in good condition and continue to circulate for many more dozens of times. Other books only make it out the door once before needing replacement. And still others never go out at all.

Books exit their active library lives a number of ways. In some instances, a patron takes a book from the library (either by legitimately checking out the book or, in rare instances, walking out with the book and effectively stealing it) but does not return it for any number of reasons.

Otherwise, a book may be removed from the collection by library staff. Whether because the book is in bad shape, outdated, or simply not circulating well enough to justify keeping it, many books meet their end this way. This is typically called “weeding.” I’ve met librarians all across the spectrum when it comes to weeding—some consider themselves aggressive weeders, and others have a much greater attachment to the books, either for professional or personal reasons. Some librarians have gone as far as to check out books on a fake patron account to justify their continued existence in the collection, and I’ve known others who check them out on their own account, particularly if they are titles they use in activities such as story time. And, often, librarians use reports, sometimes called “grubby items” and “dead items,” to determine, respectively, which books may have gone out too many times and are now “grubby” or no longer in good condition and which books are “dead” or no longer of interest or being checked out by the community. Ultimately, when a book is weeded, it is not only removed from the physical collection, but also the digital catalog and system.

And at that point, yes, the book may meet the dumpster. But not always! One librarian at Chicago Public Library, Stephanie Flinchbaugh, wrote, “If it is in good shape, it can be sent to Better World Books.” Better World Books, you might know, buys books to sell them. The old library books get to live longer lives and the library makes a bit of money. It’s a great arrangement for everyone.

But ah, yes, the dumpster. Flinchbaugh also added that at her library, “If [a book] is not in good shape, it goes into a gurney and is taken downtown to our main library. I am not entirely sure what happens to them down there. Maybe they are incinerated, maybe they are secreted away in the dark of night.” At my system, books that are truly discarded are typically handled at the branch level—meaning we don’t send them anywhere but the dumpster.

On rare occasions, library staff may bring a title or two home with them. (Depending on the library system, this may officially be considered theft, even if the book was going to the dumpster.) They may also be repurposed in programs, in which books are used for crafting purposes (I’ve used my fair share for blackout poetry).

And so it goes. A book comes into the library, maybe goes out several times, and meets its end in one form or another, as a library book. We stock the library some more and the shelves—and customers—are never poor for it, but richer as a new title enters their lives and minds.